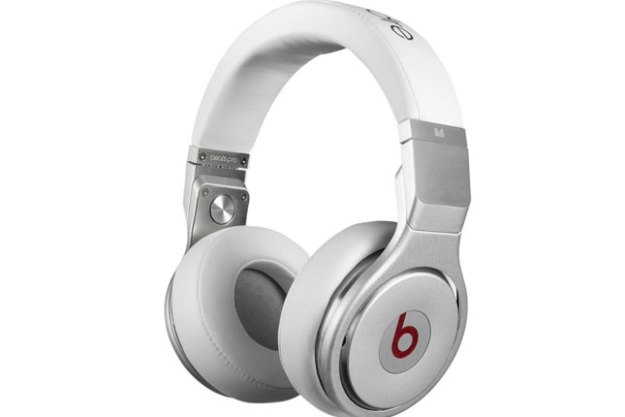 “The Beats Pro saving grace is the fantastic midrange and treble quality which was so good that we found ourselves forgiving them for their heavy handed bass treatment.”

It was almost a year and a half ago that we published our review of the Beats by Dr. Dre Solo headphones. At the time, the collaboration between audio accessory giant Monster Cable and hip-hop producer Dr. Dre seemed like a fresh idea, both because Monster was new to the headphone game, and because of Monster’s choice to go the celebrity endorsement route. Now that Monster’s headphone line and list of celebrity backers has exploded, perhaps some of the novelty has worn off. That said, most of Monster’s headphones have earned positive marks in our reviews. The Solo headphones, in particular, impressed us with their solid sound and build quality. So, when the Beats by Dre Pro (Pro) headphones came across our desk, we expected good things. Here we evaluate the Beats Pro’s performance and rank them against some of Monster’s other offerings as well as similarly priced pro-style headphones.

Just like the Solo, the Pro headphones come packed in a high quality box that opens up a lot like an encyclopedia. On one side of the unfolded box lay the headphones which, in this case, are held in place by a plastic clam-shell casing. Unlike the Solo, the Pro headphones do not come with a padded case. Instead, a soft, iPod-white pouch is packed away in a separate box. Given that the Pro are a rather large set of cans, this makes sense. A padded case would probably be too large and cumbersome anyway.

On the other side of the box we found a cleaning cloth and user manual. As we pulled the headphones from the box we noticed that a ¼-inch adapter was tethered to the bright red headphone with a rubber piece that can be easily removed if desired.

The Beats Pro headphones have bright white ear-cup cushions with a bright white headband to match. Every thing else is a matte silver finish, save the signature red Monster logo and headphone cable. There is also a version with black ear-cup and headband padding.

The Pro’s ear cushions are well padded, though we wouldn’t go so far to say that they were super plush. They also happen to be washable — a good thing considering the white version will no doubt get dingy over time.

The headband stood out to us as rather under-cushioned. The two thin metal bands that span between earphones can easily be felt along the edges and the underside of the headband isn’t nearly as well padded as it ought to be considering the weight of the headphones.

The earphones are hinged so that they can move vertically, but there isn’t a whole lot of play there. They move just enough to accommodate a small range of different ear angles and leave the rest up to the padding in the ear-phones. Another hinge found just above the ear-phones’ suspension allows both sides to be rotated toward the headband 180 degrees for more compact storage.

The headphone’s 1.8-meter cable is coiled like an old-school telephone cord — as is often the case with studio headphones — and can be extended to 2.1 meters. The end that connects to the headphones can be inserted into either the left or right hand side of the phones, depending on the direction the cord needs to go in-another studio-inspired feature.

The size of the drivers inside the ear-cups is not disclosed. We’re not sure why, and we won’t take time to speculate, but we thought that an interesting omission on Monster’s part. Suffice it to say that they appear to be on the larger end of the spectrum and certainly sound that way as well.

As a side note, we have to take a moment to mention the amount of attention these headphones got us. Every time we pulled these headphones out, teenagers started staring. Several of those onlookers even went out of their way to ask us if they could check them out. It was clear by the reaction we witnessed that this set of headphones has already earned a reputation for itself.

As we began our listening tests, we knew immediately that we were in for an involved evaluation period. Each song we listened to sounded vastly different than the one before. We have to attribute that experience to the fact that the Beats Pro seem to stay very true to the recording. Poorly mixed and mastered recordings sounded poor. Likewise, elaborately mixed and mastered tunes sounded very good. However, beyond sounding loyal to the process, the Pro’s gave a sort of “insider’s look” into some of the processing that goes on behind the scenes at a recording studio. Poorly punched-in and layered tracks were suddenly blatantly obvious in tunes that we’d heard several times before and background noises in recordings were clearly distinguishable where we’d never heard them before. It was an engaging experience that we feel would entertain almost any listener.

Of course, all of this sonic exposure and transparency can’t be pulled off unless the headphones can execute midrange and treble frequencies with some accuracy as well. The Beats Pro do both.

Midrange frequencies are very well handled by the Beats Pro headphones. No cloudiness, coloration or even a hint of softening was present to impair us from enjoying accurate reproduction of vocals or instrumentation. There is, quite frankly, nothing more to say. The mids were just flat out fantastic.

The high frequencies, somewhat surprisingly, were equally impressive. We recall from our reviews of some of Monster’s other products that the highs were a bit on the aggressive side. Not so with the Beats Pro. Cymbals, brass, strings and vocal sibilance was startlingly accurate and a real pleasure to listen to.

If only we could continue with the accolades. Alas, we can not, as the bass response of the Beats Pro headphones is just plain over-the-top. On the plus side, the bass is punchy instead of boomy, and there is a growl to the way the Pros would reproduce electric bass that one doesn’t often find in a pair of headphones, regardless of their size. The problem we had with the Pro’s bass response wasn’t an issue of quality, rather it was a matter of quantity. For our tastes, the headphones just pumped out too much bass. That said, we think bass-heads will love these cans. If you want your head pounded, the Pros will do the job for you.

Our only other hang-up for the Beats Pro proved to be a house divided on comfort. Some testers felt the earpads and headband exerted too much pressure, leading them to take breaks four or five times per hour. Others had no problem listening for hours at a time without complaint. It’s a subjective matter, to be sure, but here’s on objective warning sign: The Beats Pro weigh a ton. Even among those who found them comfortable, they aren’t exactly the type of headphones you can forget you’re wearing.

Monster markets these cans as studio-grade headphones appropriate for use by recording musicians, DJ’s, sound engineers and the like. Taking that into consideration, along with the Pro’s MSRP of $449.95 (though they can be had online for as little as $340) we tend to look upon these headphones as a studio musician or recording engineer might. To that end, we consider balance of sound and comfort factors to be crucial. Unfortunately, the Beats Pro deserve asterisks in both columns for overloaded bass and extreme weight. Their saving grace is the fantastic midrange and treble quality which was so good that we found ourselves forgiving the Beats Pro for their heavy handed bass treatment. Were they a little more comfortable, we’d score these headphones a good point higher. Perhaps future iterations will address these issues. If so, they would certainly earn their asking price.