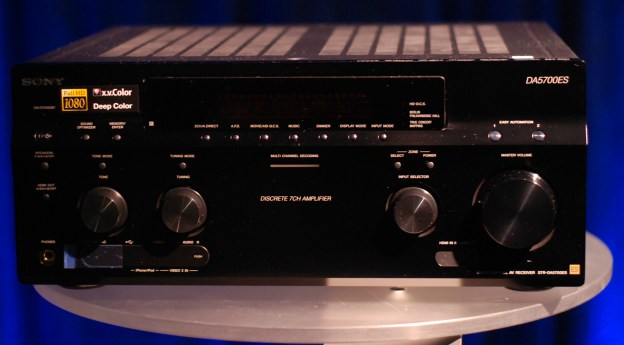 Sony closed out press day at CEDIA 2011 with several new product announcements, including news that two receivers have been added to its ES line.

From the outside, the STR-DA3700ES and STR-DA5700ES look almost exactly like last year’s STR-DA4600ES, which we recently reviewed. However, it seems that Sony has made some considerable changes under the hood, where it matters most.

Sony announced that both receivers now support streaming video content from Netflix, YouTube, Sony’s own Entertainment Network “and more,” indicating that deals with other content providers might still be in the works. DTS Neo X, a recently introduced 11.1-channel surround sound format will also be supported by both models.

Apparently, Sony has also revamped the user interface in these receivers to be more user-friendly  and claims it has further refined built-in set-up wizards with more automatic setting capabilities. We’re glad to hear it, considering we didn’t enjoy the version built into 4600ES that we tested, and hope the wizard will be a little more malleable for those who want to involve more advanced settings. We’re also interested to see what the built-in Android and iOS apps will bring to the table.

Thankfully, most of what we liked about the 4600ES remains for these two new models. Faroudja video upscaling (including for zone 2) is still in the house and Sony kept the four-port Ethernet switch, too — one of our favorite little features.

The new ES models are scheduled to be available this November, and we’ll be sure to get hands on for a full review. While it appears these new receivers are meant to be easier to use and offer richer content, it remains to be seen if Sony made any changes that might impact sound quality in a positive way.

The best HDMI switchers for 2022