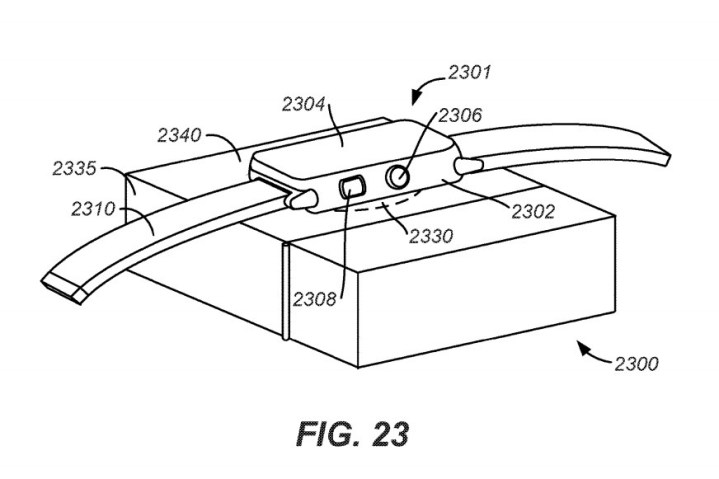 When Apple updated its hugely popular AirPods this year, it did not make them waterproof or even water-resistant as many had hoped for. But that doesn’t mean Apple isn’t actively thinking about ways to make its true wireless earbuds a little more durable. Our best evidence of this comes in the form of a  patent application that was published on Thursday, September 19. In it, Apple describes its AirPods and wireless charging case at length, but if you look beyond the initial description, you’ll find two very interesting design claims: An electrical connector on the case that could be made partially or fully waterproof and the ability to wirelessly recharge an accessory like an Apple Watch using the AirPod charging case.

Now, a waterproof electrical connector on a charging case is no guarantee that the AirPods themselves will end up being waterproof, but it would make a lot of sense. We already know that the charging case has some kind of water-repellent coating on its circuit board. Apple’s recent iPhones are water-resistant, too. Many of the AirPod’s competitors, including the true wireless Beats PowerBeats Pro, feature some degree of waterproofing. If you look at some of the top-selling AirPod accessories, fully waterproof outer shells for the charging case are very popular. These indicators, plus the patent application, make it a good bet that the next generation of AirPod will be able to cope (officially) with some water exposure. Strangely, all of the drawings in this patent application show an AirPods case that opens from the side, Zippo-style, and not the current front-opening design. Perhaps a side-open design, with its smaller hinge, is easier to waterproof.

As for the ability to wirelessly recharge an accessory from the charging case? That’s certainly not a longshot in terms of the technology needed. Huawei and Samsung both let you juice Qi-charging devices by sitting them on the backs of their latest smartphones, and there’s been speculation that Apple might add a similar feature to its iPhones down the road. The bigger question is around charging capacity. At the moment, an AirPod charging case contains a 398 mAh battery, which is big enough to charge the tiny cells in the AirPods about four times. An Apple Watch would be a different story. The Apple Watch 4 has a 291.8 mAh battery according to a recent teardown, which means that fully recharging it from an existing AirPod case wouldn’t leave much juice leftover for your AirPods. Still, battery capacities are constantly improving and as we’ve seen recently, true wireless earbuds can now last up to 10 hours or more on a single charge.

We can’t say whether or not the next AirPods charging case will be waterproof, or work as a charger for other devices, but Apple’s patent shows the company is at least considering it.

ATSC 3.0: Everything you need to know about broadcast TV’s next big thing

Everything announced at Google I/O 2022: Pixel 6a, Pixel Watch, search enhancements and more!