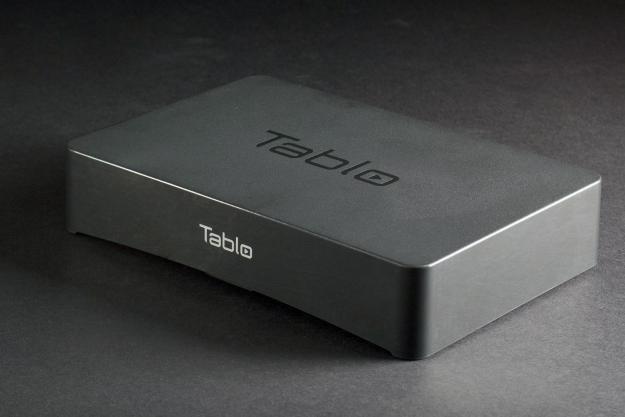 “Tablo is a slick device with a sweet interface even a tech novice can love.”

Cord-cutting isn’t just about the unassailable attraction of saving money, it’s also about access to the content people want. Aside from Netflix, Hulu and all the streaming boxes that are prominent in that conversation, over-the-air (OTA) digital antennas are a significant piece of the puzzle. Nuvyyo, a Canadian startup from Ottawa, has maneuvered between the two, coming to market in the U.S. with the Tablo, a $219 set-top DVR box that streams and records free OTA TV channels to tablets, computers, Apple TV and Roku.

Despite the fact that streaming is an integral part of its functionality, the Tablo differs from the likes of Aereo and Simple.TV, and Nuvyyo thinks it’s got the goods to make everyone happy and be an indispensable part of any cord-cutter’s arsenal. We gave the Tablo a good workout to see if we agree.

Like the Tablo itself, the box it comes in is unassuming. We opened it up to find a one-page quick-start guide laying on top of the box’s sparse contents, which included the Tablo, a power cable and an Ethernet cable.

The Tablo isn’t a design marvel by any stretch, and it doesn’t need to be. The compact box sports a matte finish on top, with piano black wrapped around the sides, front and back, and Tablo’s logo stamped on top. The box feels solidly constructed, which helps it to feel more like a real piece of gear and less like a toy.

Naturally, the Tablo hides its modest collection of inputs at the back, including a power adapter port, a coaxial input, Ethernet port, two USB 2.0 ports and a small blue reset button. Interestingly, Nuvvyo put the coaxial input at the far right (when facing the back) of the unit, rather than closer to the middle, a design choice that may play a role in where you place it.

The Tablo does have Wi-Fi built-in, so wired connections are not a prerequisite for setup, though we preferred to go the wired route for the sake of maintaining a consistent data pipe to the unit. Part of the reason why is that the Tablo can’t take advantage of the faster throughput and range of 802.11ac, the fastest Wi-Fi standard today (it does support dual-band 802.11n though).

Under the hood, the box has dual ATSC tuners, allowing users to simultaneously watch one show on one channel while recording another show airing on a different one. Tablo does plan for a 4-tuner version in the future, which will give families who watch a wide range of shows more recording options. That box is expected to run an additional $80 ($300).

The Tablo has no HDMI connection, so it can’t be connected directly to a TV. This may seem counterintuitive to some, but it’s actually integral to the Tablo’s design. Since the box doesn’t have to be placed anywhere in particular, that means it can live where the antenna needs to live, optimizing reception and video quality. Besides, we think most of the Tablo’s audience is going to have the equipment necessary to pipe the Tablo’s stream up to their TV on hand anyway – namely, an Apple TV or Roku box.

We wound up placing the Tablo in a bedroom with a Mohu Ultimate digital antenna flush on a window, while a powerline adapter or Wi-Fi extender ensured we still had a wired connection to our router, though it was placed in another room. We also tested the Tablo’s Wi-Fi connection, and everything operated smoothly.

Watching live and recorded TV from outside the home is possible through Tablo Connect.

Staying true to its utilitarian focus, the Tablo needed no physical upkeep, since it’s the software on mobile devices, computers and set-top boxes that handles operation. After plugging everything in, we set the device up using the free Tablo app on an iPad mini. The step-by-step process was easy to understand and highly visual, communicating things in a way even novices would have little trouble with.

Armed with a zip code, the Tablo scanned, registered and and listed all the OTA channels it could find. These included networks like NBC, CBS, ABC, FOX, The CW, PBS, ION, Univision and a handful of local affiliates. At this point, Tablo gave us the option to add or delete any channels it indexed for our own custom channel list. Don’t watch much Univision or TBN? No problem, you can remove them from your list. We also appreciated that we could see signal strength and broadcast resolution at this step.

After settling on the channel list, the Tablo app loaded two weeks of program guide data. From there, the main interface aggregated all the TV shows, movies and sports programs in alphabetical order and laid them out in a grid-like format with artwork.

Tablo doesn’t have any built-in storage. Instead, it relies on an external hard drive plugged into one of the USB ports in the back to store recorded content. Nuvyyo gave us an empty, pre-formatted 500GB external drive for this review. New users will have to format whatever drive they use, so don’t expect to keep any data on an existing drive and use it with the Tablo.

The box can only read drives up to 2TB in capacity, and although it sports dual USB ports in the back, Tablo can only support one at a time, so there is currently no way to expand on the 2TB limit. Nuvyyo told us that they’re working on a firmware update to unlock dual-drive support, but it’s not yet known when that will happen.

Of course, the Tablo will record in HD, but the user has the option to record at varying quality settings to save drive space. Our HD recordings (default setting) took up between 2GB and 4GB per hour of HD content. That translates to between 150 and 250 hours of HD recording on the 500GB drive we used.

Nuvyyo tried to enable a fairly broad range of support for the Tablo, starting with native apps for the iPad and Android tablets. For the latter, compatibility is limited to Android devices with screens 7-inches or larger, and running 4.2 Jelly Bean or later. There are no dedicated smartphone apps, so we instead accessed the Web-based app meant for PCs and Macs using HTML5 browsers on a few different handsets. We managed to connect using an iPhone 5s, HTC One (M8), Nokia Lumia 1020 and BlackBerry Z30. The site is optimized for Chrome browsers, and we found it to be a bug-free experience with that brower.

The Tablo doesn’t have any built-in storage, it relies on an external hard drive.

We managed to set up the Tablo channel on both a Roku 3 and Roku Streaming Stick, enabling us to watch live TV or recorded content that way, too. We also casted content to a Google Chromecast successfully and used AirPlay on an iPad for seamless Apple TV playback. The Web-based app worked consistently well enough for us not to consider it a total drag on the overall experience, but we would prefer to see dedicated smartphone apps for a better integrated experience.

It was also easy to appreciate not being tied down to one part of the home, either. We were able to watch a show live in any room, or even on the patio, with few hiccups. We had the Tablo nowhere near a TV and were still able to watch on the big screen or comfortably in bed with a tablet before slumbering for the night.

We could search for a TV show or browse through movies to see which ones we wanted to record. We even had the option of recording every episode of a show or only the newest ones to air. As for playback control: Nuvyyo didn’t include a method to remove commercials entirely, but there is a 30-second fast-forward button in the playback controls that allows quick skips forward.

Access to live TV and DVR recordings from outside a home network is possible through a feature called Tablo Connect, which is turned off by default. Streaming quality for video ranged from 500kbps to 4Mbps (or “full quality” beyond that). There is an “automatic” mode but it’s greyed out because Nuvyyo hasn’t enabled it yet, so we always had to choose a setting manually. Streaming performance was pretty good, though we were very careful not to keep it at a high bitrate if we were using an LTE device on a shared data plan.

Something worth noting is that, whether we watched at home or while away, live TV streaming hot our device’s battery hard. Watching an NHL playoff game on NBC sapped our iPad – set at 50 percent screen brightness with a couple apps frozen in the background – of about 40 percent of its charge. Android tablets didn’t fare much better, nor did smartphones. In contrast, watching recorded shows was more forgiving, taking up less of the charge.

What Nuvyyo is attempting to do with the Tablo isn’t without precedent, given that Simple.TV already offers something similar. But there are some specific differences between the two. Simple.TV doesn’t support streamers like the Chromecast, Roku and Apple TV. It works only via Ethernet, has just one USB port, uses a noisy cooling fan and is more expensive at $250. But it does trump the Tablo in being able to accomodate a cable connection, so long as it’s unencrypted ClearQAM.

Subscribing to Tablo costs either $5 per month, $50 per year or $150 lifetime. Simple.TV doesn’t offer a monthly subscription, instead offering $60 for an annual one, or $150 for life. That subscription matters, because several features aren’t available on the Tablo without one. The first 30 days upon setup are free, but beyond that, it will require a commitment to keep them unlocked. That includes Tablo Connect, the remote access feature that really changes the usability of the product.

It’s hard not to like the Tablo. Setting it up is easy, the app is intuitive and looks good, and it streams to a number of devices in or out of the home. Granted, its up-front cost may seem a little steep, but considering the savings that can be had on the long term by giving up cable, perhaps the price isn’t such a barrier after all.

For cord cutters, an OTA DVR system is an important element for a successful transition away from cable or satellite service, and the Tablo happens to be one of the best solutions we’ve seen yet. We hope future models offer an HDMI output, and we look forward to upgrades that allow multiple hard drives to be used at once. But even as it is, the Tablo is a slick device with a sweet interface even a tech novice can love.

Topics
The best Bluetooth speakers for 2023: Marshall, Sonos, JBL, and more
NAD’s CS1 adds wireless streaming music to any audio system
Bowers & Wilkins’ wireless earbuds get better battery life and longer range
The best headphones for running in 2023
This massive OLED TV has a $1,000 price cut at Best Buy today
I replaced my kitchen TV with an Echo Show 15 — and I kinda liked it
The best HDMI cables you can buy in 2023
The best speakers for 2023: great hi-fi options for music and more
The best Blu-ray players for 2023
Why the Nest Hub Max still rocks as a kitchen TV
Stream live sports without cable with Sling — now 50% off
OnePlus Buds Pro 2 to support Android’s new spatial audio feature
Should you mount your TV above a fireplace?