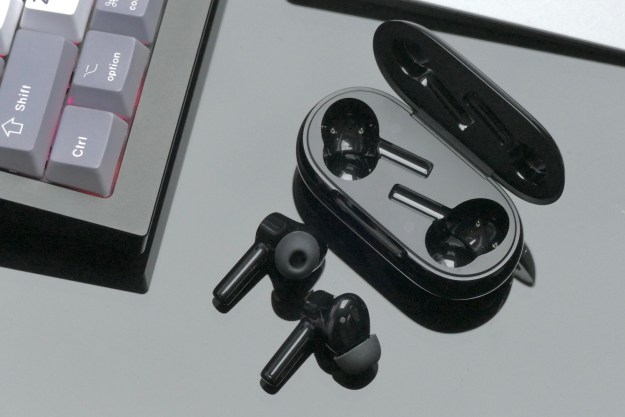 “Active Noise Cancellation is a welcome addition to the lightweight OnePlus Buds Z2, but the heavy bass delivered by the 11mm drivers can be overpowering, and they don't really stand out enough to beat the competition.”

True wireless earbuds, almost regardless of the price, need to stand out to attract attention today due to the massive amount of choice available. OnePlus is no stranger to standing out when it comes to its smartphones, which usually boast good design, desirable features, and a tempting price.

But what about the OnePlus Buds Z2? They follow the $49 OnePlus Buds Z, but the price has doubled now that active noise cancellation (ANC) and a pair of upgraded drivers have been added. Is that enough to separate them from all the others — and to make you part with $99 to get them?

The OnePlus Buds Z2’s case is made of glossy plastic — my review model is black, but a white model is also available — with the brand name in a simple script on the lid, which is securely held closed by a magnet. Open it up and the upper section feels quite cheap and flimsy, with a scratchy matte plastic inner lining holding the Buds Z2 in place. It’s a simple and nondescript case.

OnePlus has chosen a simple design for the Buds Z2 as well. A short tube-like stem protrudes from the featureless speaker housing, with visual interest provided only by a sunburst-style, CD-like end plate. That’s it. They’re certainly not ugly, but they’re not inspiring either. OnePlus is definitely going for subtlety here, but the case and the Buds Z2 design borders on the boring.

In the box, you get three sets of eartips in small, medium, and large. The medium suited me best, and according to the MyMelody app, provide a good seal in my ears. There’s also a short USB Type-C cable to charge the battery in the case. A button on the back of the case puts the Buds Z2 into pairing mode, and there’s a single LED on the front to indicate the status.

While I’m not especially taken with the look of the OnePlus Buds Z2, I can’t fault the comfort or the durability. The Buds Z2 are very light at 4.5 grams each and don’t cause ear fatigue at all. I have worn them for four hours straight and suffered no problems. Each bud has an IP55 water -resistance rating that even lets you clean them with a rinse. It’s just a shame they look rather generic.

Inside each ordinary-looking Buds Z2 earbud is an 11mm driver and three microphones, along with a tiny 40mAh battery. The driver is the same one found in the OnePlus Buds Pro, plus there is Dolby Atmos, and AAC and SBC codec support. The design may be subtle, but there’s no doubt OnePlus has tuned the Buds Z2 for bass because, blimey, it can be overpowering.

Twice’s Scientist undoubtedly has a strong bass line, but the finesse of the song has been removed with the OnePlus Buds Z2. It thumps and booms away throughout, but due to the tight soundstage and boosted treble, it doesn’t seem to overpower the vocals, and instead shrouds the song’s cute and addictive tune in a thick blanket of bass. Listen on the Apple AirPods Pro, and the beautiful balance and control makes it sound like a different song.

This bombastic approach can also be heard in Ive’s Eleven, where the Buds Z2’s harsh treatment of the vocals and heavy bass boom doesn’t encourage you to turn the volume up. There’s also definite distortion when you take it close to even the three-quarter mark on the iPhone 13 Pro. That said, there is a ton of volume on offer if you do want it. Two of my regular test tracks — Tokyo Tower’s mix of The KLF’s What Time is Love and CloZee’s Inner Peace — both have deep bass throughout, and aren’t an especially pleasant listen either. Unfortunately, there’s no in-app equalizer or way to adjust the sound profile to cure this overzealous approach.

Compared to other headphones I use connected to my TV, the OnePlus Buds Z2 were very loud and still rather harsh, with some laughter during comedy shows being particularly ear-piercing. For spoken word, the performance was good, though, helped by the focus on highs and vocals. I used the OnePlus Buds Z2 for video calls, and while the audio quality was fine for me, listeners described it as average.

Dolby Atmos support is offered. but only if you use a recent OnePlus phone. On the OnePlus 9 Pro, I used the Disney+ and Tidal apps to try it out, but results were mixed, not least because actually establishing you’re listening to Dolby Atmos content is rather difficult. Watching Shang-Chi and the Legend of the Ten Rings didn’t really sound any different, while the Atmos mixes on Tidal’s Atmos playlists were better, with some interesting spatial effects, but overall it was never as effective as listening to Atmos tracks through Apple Music and the AirPods Pro.

The OnePlus Buds Z2 are all about the bass and treble and lack fine balance, meaning the midrange tends to get lost and some detail is obscured. This harshness didn’t suit my taste or choice of music particularly well, but I can see bass and volume junkies enjoying the sound more — just be aware that there’s nothing relaxing about listening to music the OnePlus Buds Z2. These are loud and very proud of the bass they’re capable of delivering.

The touch controls on the OnePlus Buds Z2 are responsive, and it’s easy to locate the sensor with your finger, which makes them better than many other earbuds. All you do is tap the flat end plate to pause or play music, or touch and hold to change the noise cancellation setting. There’s no messing around with holding the stem, or trying to find the touch sensor, it’s all sensibly integrated, and the sensor seems large enough so you don’t end up repeatedly tapping to find the right spot.

There are two noise cancellation settings, a standard and a maximum mode, plus a transparency mode. You long press the earbud to switch between them. By default, this goes from transparency to maximum noise cancellation, but you can customize this in the app. I ended up setting it to the standard ANC mode instead of the maximum, due to the excessive hiss created by the max setting.

These are loud and very proud of the bass they’re capable of delivering.

The +/-25db standard mode does create some pressure in your ears, but I prefer that initial discomfort to the greater background noise generated by the +/-40db max mode. I also didn’t notice a huge difference between them in terms of isolation either, although I suspect that’s to do with environment. Standard mode was fine for home and general outside use, but I haven’t been on a plane or in an excessively noisy environment to try the max setting fully.

The OnePlus Buds Z2 connect using Bluetooth 5.2 and support Android Fast Pair, which worked without a problem on my OnePlus 9 Pro and Google Pixel 6 Pro, though I had to connect manually on the iPhone 13 Pro. I also connected them to my Sony television. I could move around my single-floor apartment without losing connection, and range was similar to other wireless headphones I use.

I found the connection time to be very fast and extremely reliable. During testing, I constantly switch between devices and headphones, and none of this caused the Buds Z2 any issues at all. If you tap and hold an earbud for a few seconds, the Buds Z2 quickly switch between previously connected and available devices, too. Take the headphones out of your ears and content is automatically paused, and this even worked when streaming an app to my TV from my phone.

If you own a OnePlus phone, the Buds Z2 do not require the installation of an app, with all the features and firmware update duties handled by the phone. For other Android phones and the iPhone, you should download the My Melody app, but the OnePlus Buds Z2 operate perfectly without using the associated app if you prefer.

For my choice of music, the OnePlus Buds Z2’s bass response is laughably over the top.

My Melody lets you customize the touch controls, update the firmware, change the noise cancellation mode, perform a fit test, and check the battery level for the case and buds. It has been reliable on my iPhone 13 Pro, although it’s not something I’d use very often outside of applying any firmware update.

In a listening session where the OnePlus Buds Z2 switched between my iPhone 13 Pro, my Sony TV, and my Mac Mini, the low battery warning came on after four hours. They should get close to OnePlus’ estimated five hours of use with ANC active, but don’t expect to go over this. OnePlus estimates 27 hours total ANC use or 38 hours without. It takes 90 minutes to fully charge the case, and 10 minutes of charge will add five hours of use via the included cable and a standard adapter. The OnePlus Buds Z2 do not have wireless charging.

The original OnePlus Buds Z cost $49, but the addition of ANC and the Buds Pro drivers means the Buds Z2 have doubled in price, and at $99, they have some serious competition. We’ve noted how you don’t need to spend more than $100 to get a pair of feature-packed true wireless headphones these days, and although the OnePlus Buds Z2 do tick most of the boxes, the sound is going to split opinion.

For my choice of music, the OnePlus Buds Z2’s bass response is laughably over the top, robbing most songs of any subtlety. However, I do understand that a lot of people want seriously loud and bassy headphones, and while the Buds Z2 are definitely that, the mega bass does obscure detail and overwhelm the midrange, which isn’t ideal regardless of how much thump you want.

On the positive side,the touch controls are good, the noise cancellation effective in standard mode, and there’s IP55 water resistance. It’s a shame the battery life doesn’t extend past four to five hours with ANC, and the design isn’t a bit more inspired. The OnePlus Buds Z2 are unremarkable unless you crave some thunderous bass.

Unfortunately for OnePlus, and fortunately for you, there are so many alternatives to choose from that you can get exactly what you want for the same price or less. I have used the OnePlus Buds Z2 alongside the $99 Nothing Ear 1 and prefer the latter’s natural sound profile and overall design, as well as welcome the addition of wireless charging.

If the Nothing Ear 1’s aren’t for you, we have eight alternative options here, all under $100. The choice is so wide that you can pretty much find a pair that matches your exact needs. That variety presents a problem for the OnePlus Buds Z2, which struggle to stand out.

The IP55-rated earbuds and IPX4-rated case give the OnePlus Buds Z2 plenty of protection from water and dust, so they will be fine for use in the gym or the rain. The plastic construction should prove resilient to damage. The HeyMelody app enables firmware updates should OnePlus release them in the future. Battery life may deteriorate over time, but there’s no reason they won’t last for two or three years before this becomes noticeable.

No, there are better-sounding and equally, if not more, feature-packed options available for the same or less money.