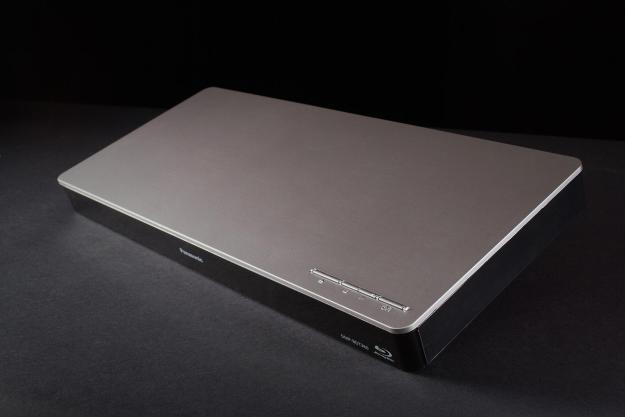 “Panasonic's BDT360 offers loads of features and class-leading performance at a nice price.”

When it comes to purchasing a Blu-ray player, people tend to shoot for the stars with a premium model or fish from the bottom of the barrel with a budget option. After all, if you’re not looking for super-fancy innards, 1080p HD Blu-ray via HDMI should look pretty great coming from almost any machine, right? Actually, that’s debatable, but audio and video quality notwithstanding, there’s something to be said for a mid-tier player when it comes to build quality and bonus features. If you’re looking for a device that will be the hub of your Internet-connected entertainment system, you can find a lot of value in the middle ground. As we recently discovered with Samsung’s impressive HD-H6500, crossing above the hundred dollar line comes with its benefits.

Offering speedy load times for discs and video streaming apps, an attractive user interface, and an impressive suite of features, the BDT360 looks to punch above its $140 class. We recently put the player through a litany of tests to see how it held up.

Judging from the box, the BDT360 looks like it’s finished in gorgeous brushed aluminum, but opening the package reveals the textured top is a plastic facade. The player feels a little light, which would be cause for concern if taken as an indicator of poor build quality. However, most players at this price have a similar budget feel, and this player’s top layer is much more durable than the glossy black exteriors found on many competing players, which tend to collect more tracks than an ice rink after a hockey game.

A conspicuous absence of any visible disc tray door might have some scratching their heads, wondering where the Blu-ray goes, but plugging the device in and pressing the eject key will solve that enigma, as the entire smoked plastic face opens like a jack-in-the-box when the eject button is pressed.

Though the BDT360 may feel a little chintzy, it looks pretty good from a few feet back. The unit’s thin profile and silver top give it a sleek bearing, as does the pulsing blue LED bar found just above Panasonic’s logo. Raised buttons at the top also give easy access to basic operations like eject, play, and power.

The entire smoked plastic face opens like a jack-in-the-box when the eject button is pressed .

The device has the expected digital connections, but, like the Samsung H6500, lacks any analog connections. Along the back of the player is an Ethernet port, power port, and optical digital audio output. An included SD card slot (with a max 64GB SDXC compatibility) and USB port under the front panel offer easy access for loading your digital media files. The device also supports Wi-Fi 2.4 GHz and 5.0 GHz connection.

Keeping pace with its mid-tier brethren, the BDT360 is stocked with features. Along with 4K upscaling and 3D-capability, this model is DLNA-compatible, allowing access to content from media servers and NAS storage devices. Also included are a handful of streaming video apps, and Miracast compliance for Android device mirroring. The BDT360 is compatible with a host of audio files, including hi-res WAV and FLAC files at 192kHz/24bit. DTS-HD high-resolution audio, DTS HD-Master and Dolby True HD audio are all supported.

The system’s small remote control packs in all of the controls neatly, allowing relatively incident-free navigation of the system. Along with the requisite number pad and navigation keys are a few handy options, including the ability to program basic TV commands, as well as some much appreciated hotkeys.

Top on the list of hotkeys are the Netflix key (always a nice shortcut), and of course the Home key to return to the main interface page. We also appreciated the Option key, which allows for basic settings adjustment from any screen, the Pop-up Menu key, which is really just a shortcut to play Blu-rays, and the Internet key, which is a straight shot to the Apps hub. The only real beef we had with the remote is that the Netflix key is pretty close to the top navigation arrow, meaning we took plenty of inadvertent trips into big red’s app.

Panasonic’s interface is modern and attractive, but it’s a bit more spread out than we’d like to see. One of the things we liked best about the Samsung H6500 is its single-screen menu which posts apps and the disc display all on the homepage – we use the H6500 as a bit of a benchmark as it’s a top performer in the category, and for us, it wins here with sheer smart simplicity.

That said, Panasonic’s interface offers a host of options to explore in a responsive and relatively organized arrangement. The system takes a page from the company’s smart TV interface, allowing personalization for up to four users, including custom video and audio settings, wallpaper, and a personal icon, all of which can be accessed from the main Setup tile in the center.

Employing the BDT360’s aforementioned hotkeys can get you around just about as quickly as the H6500’s single screen, but if you don’t use the keys, you’ll be following the tiles. Apart from the Setup tile at the center, the main page offers four categories, including Network, Photos, Music, and Videos. The latter three options all mainly access hardwired media, while the Network key opens up the full array of Web apps.

The Network tile opens the Home Network page which offers access to both DLNA devices and Miracast setup. However, most users will spend the majority of their time with the Network Service window, which is where the apps live. (Why Panasonic didn’t just call it the apps window is beyond us).

At the apps page, users will discover a pleasant layout of tiles, including Netflix, Hulu Plus, and Youtube, as well as a couple of blank spots, with access to the Market to fill the holes. One of the coolest design features is the fact that moving to a new apps page scrolls front to back, rather than side to side, giving the effect of being pulled into the TV. However, given Panasonic’s rather underwhelming app selection, we’re guessing most users will stick to page one.

Trolling the market pulls up a few cool options like Vudu and Flixter, Facebook and Twitter, Fox Sports, and Disney Digital Book for kids. There’s also Pandora, Rhapsody, and TuneIn radio. However, the lack of Amazon Instant leaves a big hole, and aside from those few apps we just mentioned, the Market is like a graveyard where unwanted apps go to die. Willow TV (a Cricket app) and something called Bharat Matrimony are a few random examples we had no interest in. If you’re feeling saucy, there are also “after hours” apps like Penthouse VOD, but…the Internet.

The BDT360 ran quite smoothly throughout our evaluation, and moving around the system is quick as a shot. We clocked the time it took to load a Blu-ray from disc drop to movie time at around 12 seconds, which is commensurate with the H6500, as well as other top brand competitors. Putting the player through a gauntlet of transitions between services, it moved fluidly with very little lag time, even when we hit it with a rapid-fire assault of its hotkeys.

We clocked the time it took to load a Blu-ray at about 12 seconds.

Netflix loading, something most users will experience on a daily basis, was also speedy, measuring consistently at around 9.5 seconds over our busy Wi-Fi network at the office. In comparison tests, the H6500 got down to around 8.5 seconds, but also measured a bit less consistently. Our Samsung PN5500 TV was a shade faster, but older players like our Sony BDP-S590 couldn’t even come close. What did lag for us was the Youtube app. Load time was mediocre, and moving between categories felt clunky, though we’re not losing any sleep over it, and you probably shouldn’t either.

We were initially excited to try Miracast, but we would up getting mixed results. It was easy to connect to our Nexus 7, and straight mirroring was fairly snappy. Music streaming worked great too, with just a small delay in operation, but video was pretty choppy at times, and the system had a lot of trouble syncing the audio, even with the BDT360 hardwired via Ethernet. Still, Miracast has been known to be choppy on its own, so it wasn’t a huge shock.

We weren’t sure if the BDT360 would match up when it was time for the laser hit the grooves, but it proved it can muscle HD content with virtually anyone in its class. Going back and forth between the device and the brilliantly performing H6500, there was a nominal (if any) difference. Films like Life of Pi offered deep color saturation and rich contrast between the golden sun on the rippling water, and the darker scenes. And the player rendered the tiny details such as the ragged edges in the flesh of the boat’s wooden interior with excellent accuracy.

Upscaling DVDs to HD went well, again matching pace almost exactly with the H6500. And when we connected it to a 79-inch Ultra HD television, the picture looked as fantastic as we expected, popping off the screen with razor sharp edges and brilliant color saturation (though, to be fair, the TV offers upscaling results on par with or better than the player).

Audio performance was also impressive. It’s nice to know the player can take on nearly any hi-res music file we’d throw at it, scoring a coup over a lot of players in its class, which top out at 96kHz, as opposed to 192kHz.

Panasonic’s new DMP-BTBDT360 has the skills to pay the HD bills, offering a load of features and class-leading performance at a nice price. We wish the interface was more concise, and we were also fairly underwhelmed with the app selection. However, when it comes to speed and overall performance, the BDT360 delivers the goods, making it a solid choice in the mid-tier Blu-ray player market.