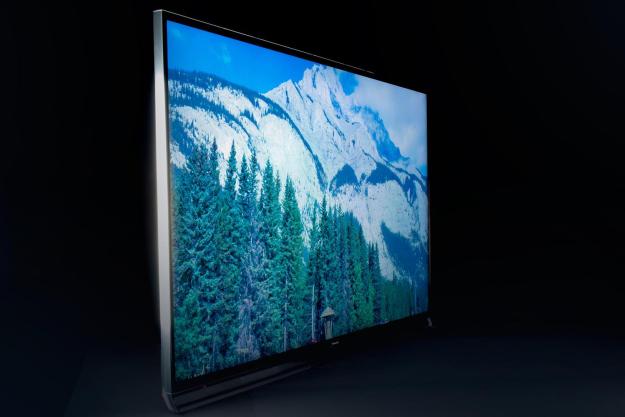 “The AX800 produces a gorgeous picture, well worthy of a plasma-lover's attention.”

Panasonic AX800U Series information: This review is based on our hands-on experience with the 65-inch TC-65AX800U TV. However, our observations also apply to the 55-inch model in the AX800U Series. According to Panasonic, the sets differ only in dimension and weight and offer identical features and performance.

When Panasonic claimed that it would bring the same picture quality to its LCD televisions that it achieved with its plasma TVs, I let out an audible snort. To be frank, most of Panasonic’s past LCD TVs have been a disappointment. So for Panasonic to pull off such a trick, it would either have to work its engineers into some serious overtime or unleash something it’s been hiding from us all along.

Some would say the THX-certified AX800 is the most important LCD television Panasonic has ever released. Others might say that distinction belongs to the forthcoming (as in possibly released in a few days at IFA 2014) AX900. Still, the AX800 is the first of the two to hit showroom floors (and our testing lab) and, as such, it serves as a bellwether for Panasonic’s success, or failure, at its goal to make a plasma-like LCD television. I don’t know whether Panasonics engineers just got super busy, or the company’s been holding back – perhaps it’s a bit of both – but Panasonic has succeeded. The AX800 is the most plasma-like LED TV I’ve seen yet, if not the quirkiest.

Oh, did I forget to mention it’s also an Ultra HD 4K TV?

The AX800 features the strangest pedestal we’ve ever seen — if you can even call it that. It might be more accurate to call it a ballast system, because that’s how it functions. Instead of using a stand that supports the TV from underneath, the AX800 uses a 41-lb hunk of black plastic that attaches to the back of the display and keeps it from falling forward or backward. It’s a strange approach, and it makes moving the TV around a bothersome, three-person affair. Not only that, but it makes the TV nearly as deep as an old-school CRT television.

To be sure, there is nothing low-profile about this TV.

The AX800 is a space hog in more ways than one, too. Its chromed support bar gives the TV a sort of floating look, yes, but it also spans the entire width of the television, which can become a problem with larger models. But wait, there’s more: The TV leans back at a rather steep angle to boot. To be sure, there is nothing low-profile about this TV.

Once you get around what’s going on behind and below the AX800 and actually sit in front of it, however, the TV is handsome. While its bezel isn’t razor thin, it is nearly as dark as the screen it borders, so it has a way of disappearing.

In the box with the TV we found a wand remote, a track-pad style remote, batteries, and two pairs of active 3D glasses.

When it comes to its Ultra HD/4K abilities, the AX800 presents a mixed bag of tricks. It has only one HDMI 2.0 input for 4K content at 60 frames per second – not that there’s much to hook up to that input at the moment. But curiously, that is also the TV’s only ARC-enabled input, and it is the last of the HDMI options, under HDMI 4. Weird.

If you’re a hardcore PC gamer or own a cutting-edge home theater PC, however, you’re going to love this: The AX800 is the only mainstream 4K TV we’re aware of that sports a DisplayPort input. This will allow 4K gaming at 60 FPS with almost no latency. We weren’t able to test out any 4K games during our evaluation period, but we’ve heard from colleagues that the AX800’s performance in this regard was outstanding.

Let’s not get too distracted by the AX800’s 4K limitations, though. This TV has a lot going for it. Panasonic reports that this set is capable of reproducing 98 percent of the DCI color gamut and 122 percent of the Rec. 709 gamut. For you non-geeks out there, that’s really impressive – the sort of thing that makes videophiles giggle in their sleep.

We were pretty surprised to learn that the AX800 uses LED edge-lighting as opposed to a full-array backlighting. The TV’s local dimming capabilities, combined with whatever voodoo Panasonic has employed under the hood, are clearly advanced, because this TV looks good enough that it almost had us fooled. This has us wondering how much better the AX900 will look.

Panasonic baked in a full suite of picture controls into the AX800, but most users will find one of the TV’s picture presets perfectly adequate. We were particularly fond of the THX Cinema preset, which removed all the processing we didn’t want, and kept that which we did. Plus, black levels tended to look their best with this setting. If you wish to hire a professional calibrator, however, rest assured they’ll have a field day with this TV. There’s software built into the TV that will even let them use an iPad to make real-time adjustments.

Finally, we must once again confront the smart TV platform and user interface Panasonic likes to call “Life+ Screen.” At the risk of sounding a little harsh, we think the best thing about Life+ Screen is that, with a few settings adjustments, you can avoid it almost entirely. A Netflix key on the wand-style remote offers a hotline to that app, and an app button on both remotes allow direct access to all the rest of the best streaming apps (Amazon, Hulu, YouTube, etc.) and … some others you probably won’t use all that often. Really, if you’re after the best streaming experience, it’s best to add on an Apple TV, Roku, or Amazon Fire TV.

To be clear, the AX800 is not immune to the limitations inherent to an LCD-based TV. We saw some vertical judder on 24p Blu-ray material, some slight backlight glow coming from the corners, halo around bright objects on exceptionally dark screens, and some washout when viewed off axis. With that said, this TV still manages to look more like a plasma than an LCD, and that is no small feat, considering no other manufacturer has come quite as close as Panasonic has with this set.

We were most impressed with how natural the AX800’s colors were.

In the interest of disclosure, this reviewer’s family room television — the one we watch daily — is a Panasonic ST60, and we’re pretty fond of it. But that gives us a natural familiarity with Panasonic’s particular flavor of picture, and the AX800 brings that signature look with it. For us, it was simply a very pleasant, comfortable television to watch. Even from just six feet back.

During dark scenes, black levels were excellent – possibly better than the Sony X900B, if only by a slim margin. The AX800 hides its edgelights very well, too. Only the upper left corner ever drew attention to itself, and even then, only rarely. Shadow detail, however, was not as good as we had hoped for, since that was an area in which the Sony excelled (for an LCD TV).

We were most impressed, though, with how natural the AX800’s colors were. With the Sony X900B, we felt like colors needed some reigning in, but we never once had that feeling with this Panasonic. In fact, its ability to render subtle hues of color across a broad spectrum was a special kind of treat.

The AX800’s brightness capabilities may not, however, suit every user. Those that like piercingly vivid images will need to juice up the AX800’s backlight to near maximum, and that will come at the expense of black levels.

With all of that said, we still think any enthusiasts who missed out on Panasonic’s ST60, VT60 or ZT60 plasma models will want to take a close look at the AX800. It’s the closest we’ve seen any LCD get to plasma yet.

This year, Sony, LG, and Samsung all folded premium audio systems into their top-tier 4K TVs, so we’ve brought the audio performance section back to our reviews. Sony’s X900B sits on the throne as king this year, thanks to what some may call an eyesore of an audio system, with LG’s Harman Kardon-designed system not far behind.

Panasonic’s AX800 sits toward the bottom of the heap, just below Samsung, but we’re still talking about respectable sound here. Panasonic keeps its speakers hidden, but we still got clear, intelligible dialog out of the TV and treble that added detail without any harshness. Bass response was lacking, however, so everything from explosions to human voices lacked some body. To be clear, though, the AX800 sounds far and away better than most flat-panel televisions on the market, and should be plenty sufficient for casual watching. For a more cinematic experience, a sound bar or proper home theater system is always recommended.

Choosing a rating for this TV is a challenge. On the other hand, the AX800 is quirky: It has a bulky stand/base, it doesn’t pull off shadow detail as well as some of its competition, and its smart TV interface is more bothersome than it is helpful. But, when it comes right down to it, a TV’s job is to put out a great picture, and the AX800 certainly does that. This is the first TV that we think is worthy of plasma-lovers’ attention, and that’s something of a milestone in the industry.

If we were to rank on picture quality alone, this TV would get a solid 9.0. With all its little oddities, though, we’re compelled to back that down to an 8. Still, with such a stellar picture, the AX800 easily earns our Editor’s Choice award.