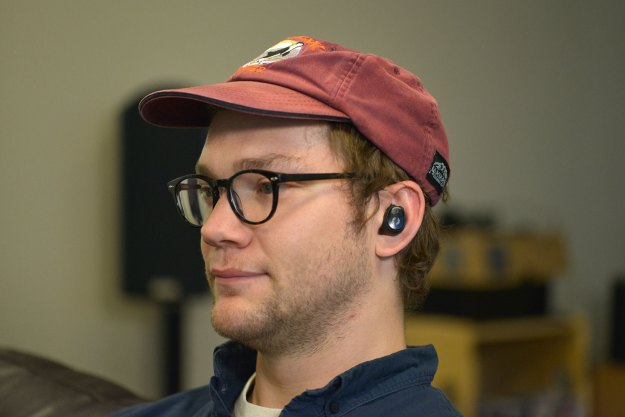 “Phiaton’s Bolt BT 700 are an elegant, affordable, and feature-packed solution for your portable audio needs.”

Everybody who’s nabbed a jack-less phone over the past several years wants a decent pair of wireless earbuds to go with it. What they don’t want (we’re pretty sure, anyway) is to spend an arm and a leg on a quality pair.

That’s where Phiaton’s new Bolt BT 700 really shine. The new true wireless in-ears offer listeners top-level specs for the category like 5 hours of battery life, waterproofing, and as a bonus, a nifty Bluetooth speaker in the charging case, all for less than Apple’s AirPods.

We spent a few weeks with the upcoming Bolt BT 700, which is now on Kickstarter and set to ship to backers in December, and came away very impressed. If you’re after a pair of earbuds that offers solid sound, durability, and a little something extra to boot, these are an excellent choice.

The Bolt BT 700 come in a cylindrical black charging case with a flat bottom that keeps them from rolling around when you set them down. On the left side of the charging case is that small speaker we talked about (more on this later), and the right side has a Bluetooth pairing button and micro USB charging port.

Flipping open the lid reveals the two earbuds, shiny black teardrops with small rubber earfins that stick out like sonic landing gear. Like models we’ve seen from Jabra and others, the BT 700 are designed to fit flush inside your ears, and are fairly inconspicuous for fully wireless earbuds.

Pulling the earbuds free reveals eartips with red accents beneath, and clearly labeled “L” and “R” indicators on the underside in bold grey paint. The buds are largely touch-controlled, but each earphone has two physical buttons for volume control (left side) and song skip (right side).

The Bolt BT 700 offer the typical assortment of feature’s you’d associate with the very best offerings in the true wireless earbuds space. Their five hours of listening time matches both Apple’s aforementioned AirPods and our current favorite in the genre, Jabra’s Elite Active 65t. Other features include an IPX 4 waterproof rating, and Bluetooth 5.0 for efficient wireless connection.

The Bolt BT 700 offer top-level specs at a mid-tier price.

The case includes three full recharges for a total of 20 hours of battery, and it even offers quick-charging to give the headphones an hour of playback in just 15 minutes.

In terms of controls, the physical buttons are easy to find when adjusting volume and skipping songs, and the additional touch controls for play/pause and ambient sound mode are fairly simple to use, though we did end up consulting the manual a few times to remind us which side controlled what. While we’re usually not big fans of touch controls for true wireless earbuds, we’re glad Phiaton’s at least require a double tap, so you won’t accidentally bump them and pause or play your music when you’re just trying to adjust the fit.

As we’ve seen with other wireless headphones, the ambient sound mode pipes in a bit of audio from the outside world, keeping you safer should you be on a run or bike ride, while making it easy to hear announcements in an airport or train station.

The most novel feature, the small speaker in the Bolt 700 BT’s charging case, is also easy to use. Simply place the headphones in the case and press a pairing button on the right side, and you’ve got yourself a teeny weeny Bluetooth speaker, with about six hours of total play time via the battery in the charging case. We honestly don’t know how much practical use we’d get out of this speaker in the real world, but it was louder than our cell phone speakers, and therefore could come in handy on occasion. Moreover, as a free add-on to an already great pair of wireless in-ears, it’s a slam dunk.

Setting up the headphones is extremely easy. Just pull them out of the case, find them on your device’s Bluetooth menu, and pair. They quickly re-paired every subsequent time we removed them from the case.

We’ll be the first to admit that we’re not particularly smitten with the way the vast majority of wireless earbuds sound – especially true wireless ones. That said, we appreciated the flat and open sound profile offered by the Phiaton Bolt BT 700, which holds up quite well when compared to numerous other options in the space.

As a free add-on, the included Bluetooth speaker is a slam dunk.

The Bolt BT 700 steer clear of the overwhelmingly muddy low-end sound signature offered by so many other true wireless in-ears, instead offering a wide and dynamic soundstage, tight bass, and relatively detailed treble.

The buds handle vibrant, layered music like Neil Young’s Harvest and alt-country like Ryan Adams’ Heartbreaker, with ease. The bright acoustic guitar tones and restrained drum hits in particular come through with surprising clarity. Even when listening to modern pop music from Lorde, Chance The Rapper, or Rihanna, the detail offered by the Bolt BT 700 is pretty darn impressive, despite the fact that so many of these mixes lean heavily on the low end.

Overall, we still prefer the more dynamic response of Sony’s WF-SP700N and Jabra’s Elite Active 65t, but those models cost a fair bit more. Phiaton is no slouch when it comes to providing certifiably listenable sound — something we, unfortunately, can’t say about the vast majority of true wireless earbuds we’ve tested so far.

Phiaton covers all products for defects in materials and workmanship for one year from the moment of purchase.

Phiaton’s Bolt BT 700 are an excellent pair of true wireless earbuds packing everything you want — plus a nifty portable speaker — at a very attractive price.

In this price range? Nope. With five hours of battery life, sweat resistance, and an added Bluetooth speaker to boot, there isn’t a product that touches the Bolt BT 700 for below $150. We’ll still opt for the better fit, sound, and durability Jabra’s Elite Active 65t, but they’ll run you as much as $50 dollars more.

Given our history with Phiaton products, we expect the Bolt BT 700 to last for years of steady use, provided you don’t abuse them.

Yes. As far as we’re concerned, these are the best sub-$150 true wireless headphones on the market. If you’re shopping for a set of true wireless earbuds with good sound and great battery life — and you don’t want to spend the extra dough Jabra’s buds — the Bolt BT 700 are your best bet.

Topics
Video-editing app LumaFusion to get a Galaxy Tab S8 launch
The best Bluetooth speakers for 2023: Marshall, Sonos, JBL, and more
NAD’s CS1 adds wireless streaming music to any audio system
Bowers & Wilkins’ wireless earbuds get better battery life and longer range
Amazon adds audio personalization to Echo Buds 2
Beats Studio 3 headphones are $120 off today at Amazon
Best 4K projectors for 2023
The best ultra short throw projectors for 2023
How to watch Puppy Bowl 2023
BluOS will be updated to 4.0 with a fresh look, new features
Samsung accidentally reveals price of its 77-inch QD-OLED TV
The best QLED TVs for 2023: bring on the brightness
The best OLED TVs for 2023: from LG, Sony, and Samsung