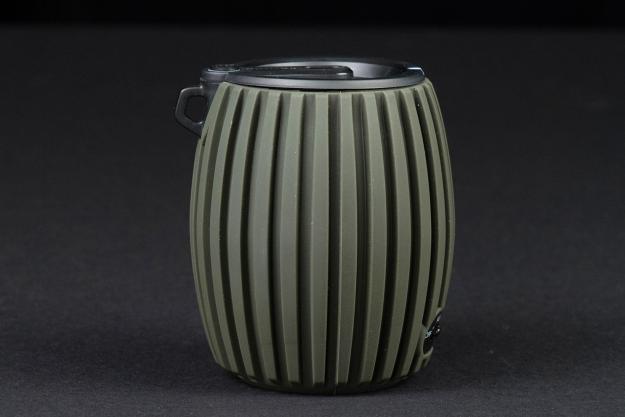 “Philips’ SoundShooter SBT30 is one of the few ultra-portable speakers we feel confident recommending. Its lasting battery, ample sound and near-weightlessness make it a top pick in tiny wireless speakers.”

If you haven’t already noticed, store shelves are stocked with Bluetooth speakers of every shape, size and price this holiday season. But it’s the little tykes in the bargain bins that will get the most attention, thanks to their winning combination of tiny size, brilliant colors and low, low prices. Let us save you some trouble and warn you off now. Most of those small, super-cheap Bluetooth speakers simply aren’t worth it. They sound bad, have terrible battery life and are bound to break the first time they’re dropped.

…if you happen to see the Philips SoundShooter SBT30, you might just want to pick it up…

Still, those super-small speakers are based on a good idea, so don’t give up! You really can get a tiny, rugged Bluetooth speaker with surprisingly decent sound and impressive battery life if you ditch the bargain bins for the electronics department and start looking in earnest. And if you happen to see the Philips SoundShooter SBT30, you might just want to pick it up right then and there and head for the check stand. As we’ll discuss in this review, the SoundShooter SBT30 may be a little pricier than some of its competition, but unlike all those throw-away BT speakers, it can deliver on its promise of ultraportable sound from a rugged little package you can take on any adventure.

Most folks won’t know what they’re holding if they get the SoundShooter SBT30 as a gift this holiday season. It looks more like a little bomb than a speaker, thanks to its ribbed rubber exterior and grenade-like shape. But upon closer inspection, you can see a little peeking out from the top of the device.

In the box with the SoundShooter SBT30 we found a small carabiner, a hybrid USB charging/3.5mm audio cable, and some product literature.

The SoundShooter SBT30 is the first device we’ve reviewed that included a carabiner we actually used. This speaker is so incredibly light, you want to clip it on anything and everything – and we did. We clipped it on backpacks, belt loops, BBQ grills, bicycles, tents and a whole bunch of other, much less practical stuff. Our point is: we took this device everywhere, and we enjoyed doing it.

The SoundShooter won’t charge your devices like many larger, more expensive Bluetooth speakers will, but it stores enough juice to last a good 8 hours at reasonable volumes. As a bonus, it seems to draw little to no power when not producing sound. We left the speaker on overnight several times and it worked just fine in the morning.

As for buttons and switches: there aren’t a whole lot of them. One Bluetooth/calling button resides at the top edge of the speaker with a blue LED indicator glowing in a ring below it. On the other side of the speaker is a power indicator LED which glows orange while charging and white when powered on.

A power selector switch lives at the bottom with positions for off, Bluetooth and Aux. Next to that switch is the speaker’s micro USB input, which allows for both charging and auxiliary sound input.

The entire speaker is sheathed in a thick, rubbery wrap, making it highly resilient. Our review sample was dropped from about 6 feet on multiple occasions, but it never missed a beat.

Pairing with the SoundShooter is simple enough, as long as you do it quickly. After a minute or so, the speaker drops out of pairing mode and must be turned off, then back on again to get it ready to pair. The speaker showed up on our iPhone 4S almost immediately, and pairing with the speaker was just as quick. We then got on with listening.

… most of the folks we played the speaker for were surprised at how full and clear it sounded for its size.

Let’s be clear: The SoundShooter isn’t going to blow your hair back or rattle your desk. But most of the folks we played the speaker for were surprised at how full and clear it sounded for its size. That’s what makes this speaker stand out from the crowd of super-cheap plastic-clad products you’ll find selling for $15 on special at your local mega-mart. You don’t get the feeling you’re listening to a cheap speaker.

As a bonus, it functions surprisingly well as a speakerphone, too. We ended up getting a call during one of our testing sessions, so we answered, spoke for five minutes and hung up without the caller on the other end of the line making a single complaint. In more deliberate tests, we learned that the SoundShooter’s call fidelity is just as good as the iPhone’s built-in speaker phone.

On the down side, the speaker can only play so loud before it starts distort, so it doesn’t work so well in noisy environments. The distortion itself can be a little disconcerting, but it is to be expected from such a small, inexpensive device. Had Philips employed a limiter to keep distortion under control, we’d be talking about a much more expensive speaker.

The SoundShooter SBT30 does face some capable competition from the likes of the Divoom Bluetune, which offers an audio output in addition to the SoundShooter features at a slightly lower price. Good luck finding it at your favorite mega-mart retailer, though. Philips enjoys a little broader distribution, so the SoundShooter should be a little easier to find.

Philips’ SoundShooter SBT30 is no portable hi-fi, but it is one of the best-sounding tiny Bluetooth speakers we’ve come across, and certainly the most rugged. For adventurers needing a small, lightweight device that sounds better than their phone, the SBT30 is hard to beat. So long as buyers go in with reasonable expectations on volume levels, we think they’ll be pleased with their purchase. And as holiday gifts go, it should make a great stocking stuffer.