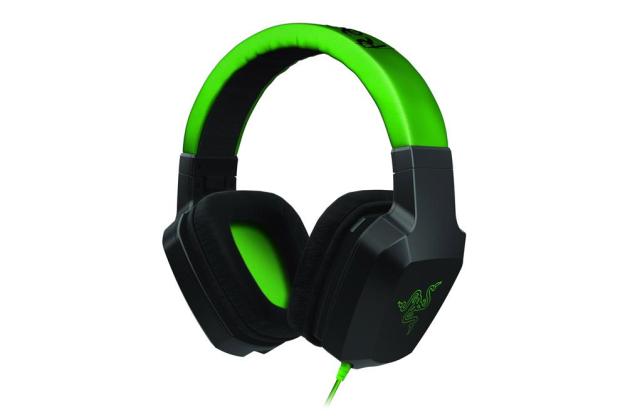 To be perfectly honest, I’d never heard of Razer before the Electra headphones showed up on my desk one morning. Now, before you start flaming me for being woefully out of touch with everything that is happening in the gaming world, try to understand my time is usually monopolized by review samples from all the usual A/V suspects and, besides that, I just don’t get out much.

But just because I spend most of my time reviewing headphones from the likes of Sennheiser, Audio-Technica, Phiaton and Klipsch doesn’t mean I don’t have some love for gaming headphones from companies like Turtle Beach, Tritton, and Astro. In fact, I still think the Turtle Beach X12 are one of the best sounding, budget-priced gaming headsets I’ve checked out to date. So, when Razer asked if I’d like to check out a set of its Electra cans, I happily agreed. It had been a while since I’d reviewed a gaming headset and I knew my 12-year-old son would be more than happy to get some hands-on time of his own and tender his opinion too.

Only, as I learned when the headphones arrived, the Electra isn’t a gaming headphone, per se. It is designed to be a day-to-day headphone for use with mobile devices and laptops, armed with a mobile-style in-line microphone intended more for gabbing on the phone than trash-talking while pwning noobs in a first-person-shooter. As you’ll read below, though, you’ll find that the Electra turned out to be a welcome surprise. Read on for our take on Razer’s reasonably-priced, gamer-friendly headphones.

Straight out of the box, the Electra have a robust and luxurious feel, though, upon close inspection, there aren’t any exotic materials at play. The ultra-soft leatherette material that covers the earpads and outer strip of the headband certainly does make a good first impression, though.

The outside surface of the earcups’ housing is made of impact-resistant, matte-black plastic adorned with Razer’s logo. Two color options are available: black and Xbox green. We received the latter, which features the super-bright color on the earcup logo, outer headband strip and cord. The black version is entirely black.

These are bulky headphones — there’s no two ways about it. As such, the Electra tend to call attention to themselves. The bright green color option adds an eye-catching element that is undeniable as well. Those looking for a stealthy headphone should look elsewhere, but we think that the Electra’s intended audience (younger gamers) isn’t going to be too concerned with the size of the headphones.

Two cords come with the Electra, one with an in-line mic, one without. No other accessories are included. A storage pouch of some sort would have been nice.

The Electra cranks out sound using two 40mm drivers with light and powerful neodymium magnets, and copper-wound aluminum voice coils. Razer doesn’t blatantly over-inflate its frequency response rating, claiming the Electra are capable of reproducing everything from 20Hz to 16,000Hz. Sensitivity is listed as 104 dB, give or take 3db, and impedance is rated at 32-ohms; all of this to mean that the Electra should play nice with just about any audio device, including the poorly-powered iPhone.

The Electra’s two included cables measure 4.27 feet in length and are terminated with gold-plated 3.5mm connectors. The earphone-end of each cable is also fitted with a twist-lock nub that helps ensure the cable won’t go flying out of the headphones, even if forcefully tugged. Note that the inline mic does not include any control buttons, it functions as a microphone only.

We found the Electra to be on par with competing headphones of its size and type. Anytime you’re dealing with a leatherette earpad, things are bound to get a little warm. That’s just the nature of the material – you get great noise isolation and that soft luxurious feel, but in time, your ears will get muggy and you’ll probably want a short break.

Considering the headband is not heavily padded, we were concerned that long-term pressure on the crown of our head might cause some discomfort, but because the Electra exert a balanced level of clamping force on the ears, that was never an issue.

Since the Electra seem intended for music playback as much as (if not more so) than gaming audio, we went into our evaluation expecting the headphones to sound on par with the Turtle Beach X12, which, though a gaming headphone, managed to impress us with solid sound quality.

The Electra exceeded our expectations. As a rule, if we aren’t already aware of a product’s price, we will avoid looking it up so that we can form our own opinion as to what we might pay for said product. Without any idea how much the Electra cost, we decided we would probably pay up to $100 for these headphones. You can imagine, then, that we were pleasantly surprised to see that the average street price for these headphones is around $60.

While the more – shall we say – seasoned listeners among us aren’t likely to be interested in the Electra, we think their sound quality is certainly along the lines of something a more refined listener would appreciate.

No matter the source, we found bass output to be fairly well extended and always in control. Banish any notions of bloated, heavy-handed bass — the Electra don’t play that. Midrange output didn’t get us bouncing up and down in our seats with glee, but there was nothing offensive about it either. We never caught the Electra sounding forced or chesty and, by and large, felt vocals were accurately portrayed. Treble, on the other hand, did show some inconsistencies. There seems to be a significant bump somewhere in the upper treble region (around 10k) that sounds intentional, as if to lend an added “crispness” to the sound. This issue was much more prevalent when testing the Electra with our iPhone than it was when we used a dedicated DAC and headphone amplifier, but we don’t think it’s likely the Electra’s users will be busting out any such high-end equipment.

For a second and perhaps more qualified opinion, we passed them on to our 12-year old junior reviewer who has very definite opinions about what he does and doesn’t like and has the added benefit of having evaluated dozens of headphones over the past couple of years. To put it succinctly, he fell in love with the Electra. The size was never a matter for our younger colleague and the sound quality suited him just fine, despite a lack of cranium-melting bass. He was certainly sad to see the Electra go when it came time for us to send them off for photography. We can’t think of a better endorsement for a youth-targeted headphone than that.

Razer’s Electra headphones are comfortable, reasonably priced and surprisingly balanced-sounding, considering the targeted audience. We expected some over-emphasized bass, but the Electra managed to produce plenty of low-end without recklessly pounding us over the head. While we felt some high frequencies were unnecessarily bright, we doubt most listeners will take issue. We think the Electra will find a happy audience among younger listeners who seek a comfortable, gamer-inspired headphone with attention-grabbing size and style.