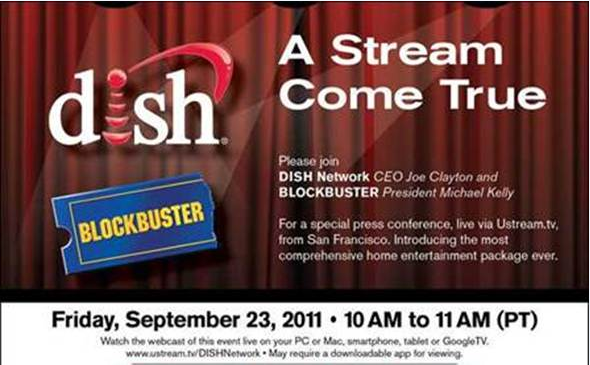 If there was a perfect time to hold a press event Dish Network might have found it. Dish Network is hosting a press event on Friday that it has titled “A Stream Come True”, where is it rumored to be announcing a streaming service to rival Netflix. It is believed that Dish will be offering an unlimited streaming option at an unknown price under the Blockbuster brand name.

We originally heard about the rumor earlier this month, and it was expected to be released in October. It is possible that in light of all the negative press that Netflix has created lately that Dish is trying to kick Netflix while they are down. If the new streaming service is going to cash in the million or so customers expecting to leave Netflix the service better have good content at a low price.

At this time it is still unclear what content will be available on the Blockbuster service, or at what price the service will be offered. Seeing as Blockbuster is owned by Dish network one may think that it might only be available to Dish subscribers but that doesn’t seem practical as a true Netflix rival. Maybe Dish subscribers will receive a discount on the service, or it will be included in monthly satellite costs to lure more customers to Dish network.

We recently wrote up a report about the best five alternatives to Netflix and Qwikster, and we might already have to update that list. If Blockbuster is able to offer streaming and disc rentals in the same service they might be able to really capitalize on the space that Netflix just abandoned.

The most common Netflix problems and how to fix them