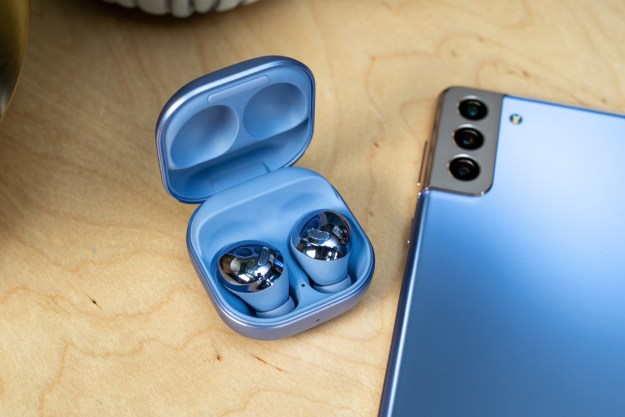 Samsung’s accessory strategy seems pretty consistent: Jump into a category, and just keep iterating. Its smartwatches and fitness trackers get updated seemingly randomly, with no set schedule. Same goes for the company’s smartphone accessories. More recently, Samsung has jumped into true wireless earbuds in a big way. The first Galaxy Buds were released less than two years ago, in March 2019. Since then we’ve gotten the Galaxy Buds+ and Galaxy Buds Live, the latter launching just months ago, in August of last year.

Now here we are, with the new Galaxy Buds Pro. It isn’t immediately apparent what’s so “Pro” about them, other than they have a couple extra features over the Buds Live and they’re more expensive. But that’s what I’m here to find out.

True wireless earbuds are never going to impress audiophiles. Thankfully for Samsung, I am not an audiophile. As someone who is perfectly happy with the audio quality from my Bose QC35 Bluetooth headphones, my car’s standard stereo, and my last half-dozen pairs of true wireless earbuds, I can’t form any sizable complaints at the Buds Pro’s sound quality.

There’s a basic equalizer available in the app with presets for normal, bass boost, soft, dynamic, clear, and treble boost. The earbuds do sound rather flat in “normal,” and the other modes feel … overly processed, but thankfully I was happy with “dynamic” for all of my listening. I spend most of my day with podcasts or YouTube Music, and the Buds Pro perform swimmingly.

It all immediately sounds “better” when you have active noise cancellation (ANC) turned on, because you just hear everything more clearly. This isn’t ever going to challenge the ANC on offer by over-ear headphones and truly shut out the world around you, but it does a decent job of softening ambient noise and letting you focus on your own audio. Samsung says you can “fine-tune” how much noise cancellation you want, but … you can’t. It’s either high, low, or off.

You can say my standards are too low, but I’m in line with the majority of potential Buds Pro buyers — so long as the quality is above-average for the segment, we’ll be happy. What matters more is how good the rest of the experience is.

Samsung nails it with its battery life estimates. It quotes the Buds Pro at eight hours of playback, or five hours with ANC enabled, and that’s been accurate for me. I almost exclusively kept ANC on, and never actually got an alert for a low battery. I’m not going to wear wireless earbuds for more than five hours straight — they’re going to come out to give my ears a break, or because I simply don’t have anything to listen to.

Five to eight hours of battery is spot-on, and the case charges the buds quickly.

Like all true wireless earbuds, they charge very quickly in the case. Just 10 minutes brings back a substantial amount of charge, and the case is rated for one-and-a-half recharges of the earbuds. Not bad for a tiny case, which itself manages to include wireless charging. The thick “squircle” shape is still not as pocket-friendly as the oblong Google Pixel Buds case, but it’s small enough to not be a problem.

One thing that could hit battery life more heavily is taking phone calls throughout the day, which is something I do infrequently but tested because Samsung made such a big deal about call quality. Calls were frankly not clear or high quality in the slightest. Paired to a Galaxy S21, incoming quality was pristine — it was my outgoing quality that was bad. Callers said I sounded “fuzzy” and there was an echo when I was talking indoors. Doing a quick test listening to someone else talking on the Buds Pro, I see what they mean — the Buds Pro provide outgoing audio right on par with any random phone on speakerphone. Your voice is shallow, and mixed with ample room noise.

Samsung made a bold choice with the older Galaxy Buds Live, introducing a new design that rested on the outside of your ear rather than using eartips that go in your ear. It had little-to-no passive noise isolation in an effort to make them more comfortable, and tried to lean heavily on ANC instead. It was awkward, and they never fit my ears properly — on top of offering zero noise isolation, which was terrible on city streets.

The Buds Pro return to a “normal” design, with rubber eartips that go into your ear and provide passive cancellation, on top of ANC. Even with those eartips, I found the Buds Pro more comfortable than the Buds Live. I immediately sized up to the larger tips, as I normally do, and they found their place in my ears naturally and didn’t require much adjustment.

The Buds Pro are much more comfortable than Buds Live — with better noise isolation.

Even with hours of wear around the house, walking around to perform errands in the city, and going on runs, I never had issues with readjusting or feeling like they were falling out. They’re so small and so light that I never had ear discomfort. My only issue while running was with the ANC, which caused annoying sound clipping with just about every step. I had to turn it off, which frankly isn’t an issue — it’s best to have a sense of your surroundings while on the move like that.

But that’s a bit antithetical to the way the Buds Pro have been pitched. From Samsung’s point of view, you should never have to manually turn off ANC or take out your earbuds, because they have advanced intelligent audio passthrough capabilities. By default a long press on either earbud turns on audio passthrough and ducks your media to a low volume, so you can hear the world around you. More interestingly, the same can happen when the earbuds detect you’re talking — it seriously works, every time, and didn’t trigger accidentally once even walking down the street, shopping  in stores, and riding the subway with people talking nearby.

Audio passthrough works, but you can’t get around the awkwardness of talking to people with it.

The audio passthrough works! The problem is, no matter how good the voice recognition and audio passthrough are, it’s still awkward as hell to use in an actual conversation. I still have earbuds, with rubber eartips, stuck in my ears and that effects my speaking volume. And the person you’re talking to can see you have earbuds in, which just adds to the awkwardness.

Worse, for some reason, when audio passthrough comes on automatically as you speak, your music doesn’t pause — it only reduces the volume. So it knows you’re trying to talk with someone, but doesn’t turn off your music or podcast? It’s baffling. It’s a no-win situation, though, because quickly pulling out a tiny earbud (or two) when someone speaks to you unexpectedly is always annoying. So I assume passthrough is better than that in a pinch — but I would never plan to speak to someone while wearing the Buds Pro.

The only issue with the Buds Pro design is the touch controls — which is a pretty big issue. Going back to the original Galaxy Buds, I’ve never been able to use them consistently. There’s a single tap to pause/play, a double tap to seek forward, and a triple tap to seek back — but when I try one, there’s no guarantee it’ll work. It typically fails with one fewer tap registered than I intended — a seek turns into a pause, and a pause or play just gets missed. That could be my problem, I suppose, though I’ve never had an issue with the Pixel Buds” touch controls.

Samsung absolutely has to start letting you customize touch controls. This is ridiculous.

A universal problem is that the controls aren’t customizable. You can only change the long-press action — between triggering ambient sound, Bixby, volume down, and Spotify — and choose one action per earbud. Otherwise, it’s set in stone, so now I have to choose between being able to trigger ambient sound and being able to adjust the volume … why? Other earbuds let you customize and use separate actions on each earbud. That’s not very “Pro.”

The Galaxy Buds Pro are a great pair of everyday-wearable true wireless earbuds. They aren’t for audiophiles, nor were they ever going to be, but the sound quality on offer is fine for the segment — and with good ANC, they more than get the job done. Comfort is excellent, letting you wear them for hours on end and maximize their five-to-eight-hour battery life. The case is compact — it’s the same size as the one for the Buds Live but smaller than that of the Jabra Elite 75T — and the fundamentals of the earbuds experience, like a strong Bluetooth connection and easy device switching, are much appreciated.

There’s nothing “Pro” about them, other than the fact that they’re Samsung’s most expensive earbuds. In a vacuum of Samsung’s own earbud lineup, it’s odd that you’re expected to pay $200 for Buds Pro that aren’t appreciably better than the $140 Buds Live in most ways — but versus the $200+ competition, they look quite good.

Even at this high price, there are multiple competitors. Obviously, if you have an iPhone, you should consider the AirPods Pro — they don’t look as good, but the audio quality, ease of use, and noise cancellation are just as good. Alternatively, there’s the Jabra Elite 85t, which are all-around fantastic earbuds.

It’s also easy to find a great pair of earbuds that are less expensive. Samsung’s Galaxy Buds Live have already been discounted to $140, and if they fit your ears properly, they’re a fine alternative. Its Galaxy Buds+, which don’t have ANC but are otherwise comparable, are just $110.

The nature of wireless earbuds is that as long as you take care of them, they’ll last for multiple years without issue. They’re water (and sweat) resistant, and have no moving parts. Just keep them in their case, and they’ll be happy for years to come.

Yes. This is a great pair of true wireless earbuds for daily use. They have solid audio quality, good noise cancellation, and audio passthrough that’s icing on the cake. They’re expensive, for sure, but are priced competitively with the other market leaders.