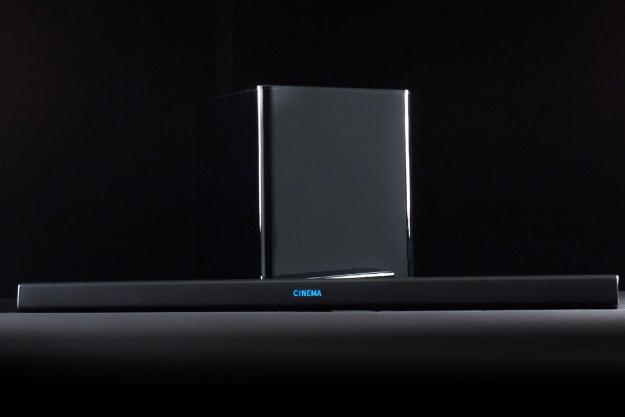 “If a boost of bass and a smooth ride is all you really need, Samsung’s HW F550 will do the trick.”

Not content to rest on its laurels as a top name in flat screen TVs, mobile phones, and tablets, Samsung has been making a concerted push into the home audio segment. The company now boasts a respectable selection of wireless speakers and home theater components, including its latest entry-level sound bar, the HW-F550.

It might seem counterintuitive to buy a sound bar from the same company that sold you that flat screen with anemic audio, but Samsung’s latest effort provides some real incentives, especially if you’re already on the Samsung band wagon. The 2.1 channel system includes multiple inputs, a robust wireless sub, a super-slim design, and a remote control that works seamlessly with virtually any Samsung TV. The question is: does it offer a performance worthy of your TV room?

The F550 definitely puts the “bar” in sound bar. Pulling the slim piece from its box revealed a long wand barely 3 inches thick and stretched to a width of around 3 feet. The unit is solidly constructed, with a rigid speaker screen covering most of its sleek exterior, accented with mirrored caps at the ends. Eying the front side revealed only a small control panel at the top with touch keys for power, volume, and source.

In contrast to the slim sound bar, the F550’s wireless subwoofer looks large and in charge. The sub is essentially a massive block of glossy plastic, with a cloth speaker grill and a port at the back. The stout cabinet is more conspicuous than most of its entry level counterparts, standing over 14 inches high and 11 inches across, and weighing better than 15 lbs.

Also in the box we found two power supplies, a USB cable, a 3.5mm cable, some setup instructions, a remote control, a wall mounting kit, and a ferrite core for the subwoofer. To our chagrin, no HDMI or optical cable was included.

The F550 offers an extensive selection of input options. Crowded into two chambers at the back are an HDMI input and an HDMI output, a USB input, a 3.5mm analog Aux input, and a digital optical input. The tight placement of the input jacks made hardwired connections a little awkward as we set the system up, especially the power cable, which stuck out below the small rubber pads that keep the bar standing, making the unit slightly wobbly.

In contrast to the slim sound bar, the F550’s wireless subwoofer looks large and in charge.

Along with the hardwire connections, the system also includes Bluetooth for wirelessly connecting to a mobile device or computer, or for communication with one of Samsung’s newer Soundshare-equipped TVs. Soundshare uses Bluetooth to communicate with the sound bar and allows the user to control the volume with their TV remote.

Besides Soundshare, another incentive to go all Samsung is the F550’s remote, which is peppered with controls that work with your Samsung TV or any other Samsung Anynet-compatible device. TV commands on the remote include volume and channel control, a power button, previous channel and muting keys, and even a speaker and source control key. As for control of the sound bar itself, the remote boasts a handy glow-in-the-dark volume and subwoofer level control pad, audio sync controls, source control, Dynamic Range Control (DRC) and smart volume control (which act as normalizers for situations with extreme volume shifts), and controls for the F550’s digital effects.

The system’s ample suite of onboard sound processing includes plenty of options like Cinema, Music, and Sports, but we got better performance with the processing turned off. There is also a “3D plus” feature for expanded virtual surround imaging, but the options are confusing, and it didn’t seem to add any audible improvement. Other digital goodies include both Dolby and DTS decoding.

The sound bar is loaded with six drivers, including two 1-inch soft dome tweeters, and four 3.5×1.5-inch oval midrange drivers. Inside the sub cabinet is a 6.5 inch low frequency driver. The system is powered by Samsung’s proprietary Crystal Sound discrete amplification, which pushes 160 watts to the sound bar, and 150 watts to the subwoofer.

As mentioned, there are several ways to get things hooked up, but the simplest and fastest is to connect via optical cable directly from your TV. However, if you want the bar to work more seamlessly with your TV, we recommend employing the HDMI connection from your ARC-equipped TV if you have one. If you happen to have a newer Samsung TV, you can also use the wireless Soundshare input for seamless volume and power control, but since the system relies on Bluetooth 2.1, the audio quality won’t stand up to a hardwired digital connection.

We’re starting to feel like a broken record here, but like many entry level sound bars we test, the most compelling element of the system was the F550’s powerful wireless sub. Still, while that seems to be the norm, it’s hard to recall a system that leaned as heavily on its subwoofer sidecar as the F550. Though the sub wasn’t particularly firm or agile, it did manage to plunge deep into the lower octaves with considerable force while also reaching well up into the midbass to pick up where the sound bar left off, creating a warm, rich signature in the lower midrange.

If you happen to have a newer Samsung TV, you can … use the wireless Soundshare input for seamless volume and power control.

Once, during a slight delay as the sub powered up, we heard just how much the subwoofer shoulders in this system. Without the sub, the sound bar sounded meek, pale and nasal at times. But, thanks to the well-blended interaction between the two, the system was able to pull off smooth textures in deep voices and visceral depth during explosions. A particularly poignant example came whenever the Starship Enterprise would jump into warp speed in Star Trek Into Darkness, evoking a potent blast of force that leapt out and shook the room.

However, unlike many budget sound bars which often sound sharp and brittle in the treble, Samsung seems to have gone a bit too far in the other direction. The F550’s high frequencies are rolled off enough that the sound bar lacked definition in the midrange and treble, resulting in a dull representation that lacked definition during the more subtle moments of music and movie content. While the warm bass response kept things smooth and full, the upper frequencies were no more present or detailed than our weak TV speakers.

The ruffle of newspaper, whispers in the background, and footsteps of characters walking along varied terrain came through soft and ill-defined. In music selections, whole melodic passages were masked and repressed. Many tunes ended up sounding murky, with little definition at the attack of percussion, vocals, or acoustic instruments.

We also had to crank the volume up to hear dialog in some scenes, which in turn sent sudden and thunderous shock waves through our home when the action heated up, startling us, and disturbing the neighbors. Features like DRC and smart volume can remedy the stark contrast in volume, but those features also rob movies and music of any dynamics, so we left them disengaged. In short: The F550’s sound was never off-putting, but unless guns were blazing or things were blowing up, we found ourselves wishing for more; more detail, more definition, more life.

Samsung’s HW F550 sound bar offers plenty of rumble to spice up your home theater experience. And while we were glad for a reprieve of the screeching highs we’ve grown accustomed to from most budget offerings, this sound bar went a little too far the other way, sounding muffled and bland.

Bottom line: If a boost of power down below and a smooth ride is all you want, the HW F550 will suffice. But if you’re looking for enhanced clarity and engaging presence to go with the boom, we recommend checking out other options, including the only slightly more expensive Pioneer Andrew Jones SP-SB23W.