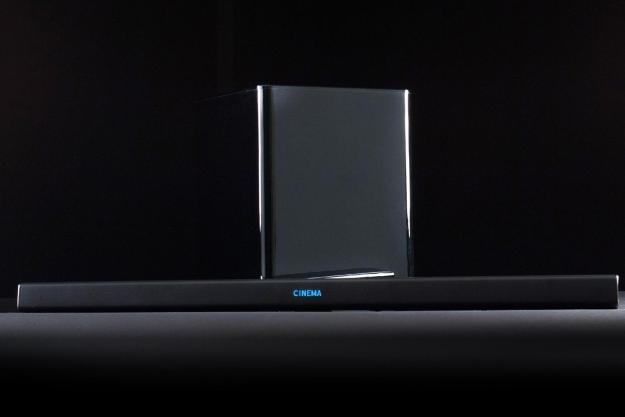 “A powerful sound bar with good balance and an extremely slim profile.”

If the Samsung HW-H550 sound bar inspires a bit of déjà vu, it’s not just you. In line with a lot of Samsung products (see the BD-H6500 Blu-ray player), the entry-level H550 borrows heavily from its predecessor, the F550. In fact, the two systems look virtually identical, and, in this case, that isn’t necessarily a bad thing.

The H550 is one of the most discreet sound bars around, but its slim profile belies the power it hides within. Between the slender wand and its wireless subwoofer co-pilot, there’s a claimed 320-watts of total system power. Still, while we enjoyed the previous version for its punch of bravado, we were hoping Samsung may have managed to squeeze more detail and finesse out of its upgraded system. You may be pleased to learn that, for the most part, we weren’t disappointed.

Speaking of déjà vu: Unboxing the H550 took us right back to December 2013, when we reviewed the F550 – the two are identically packaged and look almost exactly the same. That being the case, we borrow a segment from our earlier review: “Pulling the slim piece from its box revealed a long wand barely 3-inches thick and stretched to a width of around 3 feet. The unit is solidly constructed, with a rigid metal speaker screen covering most of its sleek exterior, accented with mirrored caps at the ends. Eying the front side revealed only a small control panel at the top with touch keys for power, volume, and source.”

Even though we’d sat through this movie before, we were again taken aback by how meek the sound bar really is. The subwoofer’s design hails back to the F550 too: a tall black rectangle, with a glossy black top. At the back is a 6.5-inch driver covered in black speaker cloth, sitting next to a small bass port. The cabinet is pretty plain-Jane, lacking any on-board controls or even a power switch.

Accessories matched up the same as well, including a USB cable, a 3.5mm cable, a stubby little remote, a set of batteries, a wall mounting kit, and a ferrite core for the subwoofer’s power cable. Like the F550, no HDMI cable or digital optical audio cable were included.

While the H550’s slender shape allows it to blend in with your TV like some sort of sonic ninja, it looks sharp when you do take notice. With larger TVs, like the Samsung HU9000 Ultra HD set we used for review, the three-foot bar almost looks like it’s a part of the TV’s stand.

The H550’s slender shape allows it to blend in with your TV like some sort of sonic ninja.

At the back side are a nice selection of connection ports, including HDMI in and out, a digital optical input, a 3.5mm Aux input, and a USB port for stored media. Bluetooth is available to link mobile devices, and, via Samsung’s “SoundConnect” feature (formerly Soundshare), users can link a compatible Samsung TV wirelessly. The chosen source, and all other information like volume and EQ parameters, can be monitored via a small LCD display tucked beneath the front speaker screen.

The H550’s sound bar is extremely easy to control with the provided remote. Key commands include the aforementioned volume and sub level controls, a Tone button which allows further adjustment to treble and bass settings, a Sound Effect key with several preset choices, and a Surround key that allows movement between Auto, Surround Off, and Surround On. We were able to find our favorite settings quickly, adjusting EQ, and switching between the Standard and Cinema presets, the former of which is a smoother ride, while the latter offers more punch, especially in the upper register.

Other controls include Audio Sync, an automatic process that handles any lip sync issues, and Source selection. Selecting the Bluetooth source automatically queues the sound bar to pairing mode. Also offered on the remote are a wide array of TV controls like volume, channel control and others – handy if you happen to own a Samsung TV.

The system is powered by Samsung’s proprietary Crystal Sound discrete amplification, which pushes 160 watts to the sound bar, and another 160 watts to the subwoofer (10 more watts than its predecessor). Like the F550, the system employs a suite of DSP effects, and is able to decode basic Dolby and DTS formats.

New to the upgraded H550 is a re-designed algorithm for the DSP called Surround Sound Expansion, designed to elevate the sound up to the TV’s level, as well as optimize the listening position. There’s also a new Bluetooth Hi-fi codec, which is meant to make Bluetooth sound better, and Bluetooth power-on, which allows your phone to power the bar up by simply calling up some music to stream. And, really, that’s it for the upgrades.

Setting the system up is easy enough, but especially so if you own a newer Samsung TV. In that case you can use the proprietary wireless connection called SoundConnect, which adds the convenience of being able to control volume and power with your TV remote, and automatically shuts the TV’s on-board speakers in favor of the sound bar.

If you don’t have a Samsung TV, you can also connect via an optical cable from your TV’s digital output, or better yet, if you have a TV sporting an HDMI port with ARC (audio return channel) you can connect there via the bar’s HDMI output. This preferred method allows for better sound (though Samsung’s new hi-fi codec seems to have improved wireless sound quality) as well as the ability to share volume and power controls from your TV remote. In this case, you will want to switch your television speakers to ‘external.’ You can connect most components to the TV, and you will also have a spare input to feed a component directly into the bar’s HDMI input.

With such similar designs, both inside and out, it’s not surprising that the H550 shares many characteristics with its predecessor when it comes to audio performance. Those shared sonic traits include a warm, full midrange, a powerful punch from the upper portion of the bass, and an upper register that’s smooth, if not a bit lacking in detail.

The H550 handles the switches between the big bangs and the light whispers better than most.

Though we haven’t heard the F550 in months, the H550 seems to have improved sound quality in a few key categories. First, for a bar only three feet wide, we were pretty impressed by the movement of stereo effects, which helped pull us into the action. Virtual Surround almost never lives up to its title, and that remains true with the H550, but it created what sounded like a better sonic landscape than its predecessor.

Dialog was also slightly more present and dialed in. We still noted a loss of dialog clarity in really active scenes, though. For example: during the Joker’s siege on Harvey Dent’s convoy in The Dark Knight, dialog tended to take on a flattened, almost papery texture as it tried to cut through blasting fireworks. With that said, we were never frustrated by a lack of intelligibility; we were always able to hear anything of pertinence when the big booms rained down.

Speaking of explosions, the H550 is one of the better entry level bars we’ve evaluated when it comes to handling the switches between the big bangs and the light whispers. Sure there were a few moments in which we had to make some adjustments, but even without the system’s Smart Volume normalization engaged, the bar tended to give us the dynamic excitement we needed to stay engaged, while leaving some room at the ground floor for the quieter moments that allow tension to build.

The only time we were really disappointed was when the sound bar would seemingly protect itself from playing beyond its means. For instance, in The Dark Knight, when the Batmobile is struck with an RPG, the impact, and resulting clatter of metal on asphalt sounded synthetic and tinny, as if the sound bar’s processing was suddenly confused about what to do. Along those same lines, we also heard a couple of instances of tweeter distortion, but very, very rarely, and only when we pushed the system really hard.

After an extended session playing music via Bluetooth from our iPhone, we definitely didn’t hear any glaring issues, and we could easily see ourselves firing up the H550 in the background as a casual listening source. This system is no hi-fi rig, and it tends to round off the attack of instruments, as well as blending instruments together in more complex productions. That said, we again enjoyed some nice stereo movement here, and while detail isn’t paramount, we heard some pleasant moments as we dug through our catalog, from Broken Bells, to Elton John.

While the HW-H550’s upgrades over prior year are subtle, they make a positive impact on sound quality, and we approve. We wouldn’t tell you to trade in your F550 if you already own one, but the new design shows an upward tick for the brand, which is always a good sign. While it isn’t an audiophile’s sound bar, those looking for a system with powerful sound, good balance, and a stealthy aesthetic will want to keep the HW-H550 in mind.