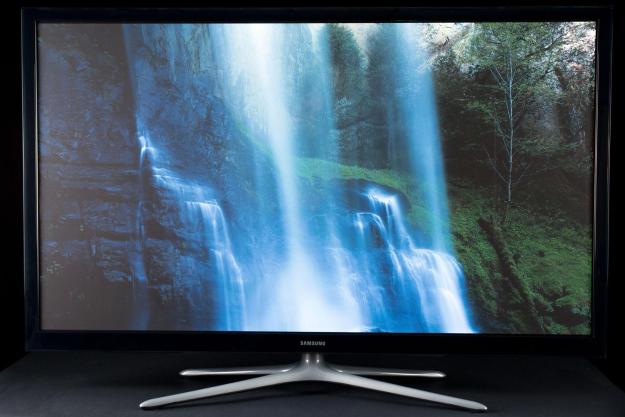 Samsung F5500 series information: This review is based on our hands-on experience with the 51-inch PN51F5500 TV. However, our observations also apply to the 60-inch PN60F5500 and the 64-inch PN64F5500. According to Samsung, the three sets differ only in dimension and weight and offer identical features and performance.

There are no two ways about it, plasma TV technology is on its way out. Despite plasma’s superior picture quality, a ravenous demand for LCD televisions has sent it into hiding. A recent announcement from Panasonic – widely regarded as the king of plasma TV –  indicating the company is decommissioning its prodigious plasma lineup in March 2014 all but insures it will soon be sayonara for the gas-based TV tech. Videophiles who covet the technology for its rich color, excellent contrast and deep black levels have renewed hope that OLED will eventually save the day, but for now, that’s a rich man’s game.

There is hope left for plasma lovers, though. For the moment, there are still plenty left to choose from, and thanks to their receding popularity, prices are very competitive. Enter Samsung’s 51-inch F5500, priced at $850. The F5500 may be Samsung’s mid-tier model, but it’s loaded with features including 3D, a Bluetooth touch pad remote, Samsung’s Smart TV platform with reams of apps, voice command recognition, and more.

That kind of price and feature combination is likely to draw a lot of attention this holiday season, so we put the F5500 through its paces to see if it deserves to be your next TV.

People often gripe about plasma TV’s being heavy. We’re not sure why; it’s not like you have to carry the thing around frequently (if at all), and there’s not a plasma out there that can’t be wall mounted with the right hardware. But, it seems to be a concern, so it is worth mentioning that the F5500 is 58 lbs. in the box and 45 lbs. with the stand; plan on having a helper around come setup time.

People often gripe about plasma TV’s being heavy. We’re not sure why; it’s not like you have to carry the thing around…

In addition to its weight, the TV stands a little thicker than many LCDs, but at 2.2 inches deep, it’s still pretty dang slim. As for general aesthetics, the panel is no work of art, but it looks smart enough on the mantel. The front face boasts a relatively slim, all-black bezel covered with a sleek guard of translucent plastic that bears only Samsung’s logo and a small red LED. The TV’s spider-like stand swivels some for viewing flexibility.

In the box with the TV we found a power cable, two pair of active 3D glasses, Samsung’s Smart Touch remote, a small collection of instructions, and some ferrite beads for high-frequency noise reduction.

The F5500 has a selection of inputs that’s more than ample for the average home theater system. Lining the back panel are 3 HDMI inputs, including one with audio return channel (ARC), 2 USB inputs, Ethernet, RF coax, and a hybrid Composite/Component input. The TV also offers built-in Wi-Fi, a digital optical output, and Bluetooth audio with Soundshare to transmit sound wirelessly to supported Samsung audio devices.

The TV’s onboard controls are handled by what has become a familiar little joystick located in a recess under TV’s lower left corner, but most users will demand the touchpad remote, which can access all kinds of bells and whistles. There’s a lot to like about the function of the tiny backlit remote. It commands a massive amount of functions with a mere swipe or touch of the pad, including pausing or searching content from streaming video, navigating the settings, and more.

However, we had a few quibbles with the remote’s design. For one thing, swiping the pad instead of tapping an actual arrow key can be a little slow in some scenarios. We also missed having a number pad, which forces the use of a slow-as-molasses on screen digital pad to select channels manually. Finally, the side attached mute button took us surprisingly long to locate, and we tended to tap it by accident.

A button at the top of the remote engages the F5500’s voice-activated commands, which are transmitted from an onboard mic. On the surface, Samsung’s voice activation appears to be innovative, but in its current form, it’s kind of the Jar-jar Binks of TV control: sort of cute and amusing for a little while, but very soon becomes exceedingly arduous and annoying.

As for the TV’s broader interface, Samsung has really fine-tuned its system over the years, and we dig it. The TV sets up in no time, and includes intuitive features like automatically switching to sources when a component is powered on. A detailed on-screen guide for settings makes adjustments a snap, and hitting the remote’s Smart Hub button pulls up a pleasant, carousel-page design with a plethora of options on the screen. The main page shows a PIP image of your last used source inside a wide array of programming options from your local area. The second page pulls up the smart apps, where virtually every app you’re looking for, from Tunein Radio to Youtube, is stacked and waiting. Other pages include a programmable Social page, and a Featured Videos page.

A menu button pulls up the rest of the TV’s options such as setting for Picture, Sound, Network, etc. The choices are pretty straightforward, with a few exceptions such as the Game Mode, which is designed to help with lag time, and shows up buried in the general section of the System menu.

One last cool feature to mention is Samsung’s AllShare Cast. Well, we should specify, it’s only cool if you have a compatible Samsung smartphone. But if you do, you can cast any pics, videos, and even games to the TV from your device.

As we expected, the F5500’s picture looked pretty good right out of the box using the Cinema preset. From there, we got to the sweet spot with just a few nudges here and there. As usual, we turned off virtually all digital enhancers like Black Tone, and MPEG noise cleaner. However, we did end up bumping the Dynamic Contrast to Low for better clarity in darker scenes. We also made some minor adjustments to brightness and color, but really, it didn’t take much to get the TV ready for action.

One nice feature with Samsung’s upper class models is the choice to copy your picture settings across to all sources, something we always appreciate. However, advanced settings don’t copy over, so you’ll have to adjust those levels for each source individually. A full list of our preferred settings can be found at the bottom of this review.

While many upper tier plasma TV’s, including Samsung’s brilliant F8500, offer superior daytime viewing thanks to specialized high-brightness, and super-black panels, the F5500 doesn’t quite get there. In a well lit room, the screen tended to look dusty, and the glass panel was reflective. Still, it was nothing that put us off, and we had a blast watching football with the TV over the weekend. The action was quick and clean, and kept us in our seats – not that it takes much to do that on a Sunday.

In a well lit room, the screen tended to look dusty, and the glass panel was reflective.

But when then the lights go down, this baby really heats up. Watching the vivid display of Star Trek Into Darkness was a joy and a pleasure with the F5500. Contrast was brilliant and colors popped, while black levels were deep with fairly impressive shadow detail. Sure, blacks had a bit of a charcoal glow to them when viewed in a totally dark room, but compared to LCDs in this price range, there was no contest. The picture was beautiful enough to catch us transfixed on subtleties like the black of the star explorers’ undershirts cast against the bright yellows and reds of their uniforms.

Going into our toughest test case, Prometheus, the TV still held up well. The fast tracking fly-over at the intro was smooth as silk, and the TV showed some color contrast in the poison the first alien drinks which we’d never noticed before. The Isle of Sky cave in which the star gazer painting was discovered was richly drawn as Dr. Holloway opens the rock, and stayed relatively clear in the shadows. The toughest cavern on the alien world didn’t show us the absolute clarity in the darkest corridors we hoped for, but it did well enough to again cast superiority over any mid-tier LCDs we’ve evaluated in those scenes. We also tested 3D performance here, which revealed some good depth, but our eyes get tired quickly with Samsung’s active shutter approach.

We did notice some considerable lag time when we used the TV for gaming, even with the Game Mode engaged, which places the TV in the Standard mode, and can also lower resolution. We didn’t measure the input lag, but movement just felt a little weighed down and slow. After a while, we became acclimated, but this is something avid gamers will want to keep in mind.

As far as flat screens go, the F5500 had pretty decent sound. These days, that’s quite an achievement. , The speakers were still pretty lean on bass and flat on detail. However, in comparison with our older Samsung LCD, it was a major improvement. The sound was much warmer than our LCD, and it didn’t grate on our ears, which we count as a win.

Those looking for top-notch picture quality in a 50-inch TV under $1000 will be hard pressed to do better than Samsung’s PN51F5500. And for that matter, the larger sizes offer excellent value as well. We were treated to a beautiful overall picture, with stellar color and contrast, impressive black levels, respectable shadow detail and silky smooth motion. Avid gamers, and direct daylight watchers may want to step up a few bars to Panasonic’s ST60, or just go for broke on Samsung’s F8500, but few televisions can offer the bang for the buck like the F5500 series can.