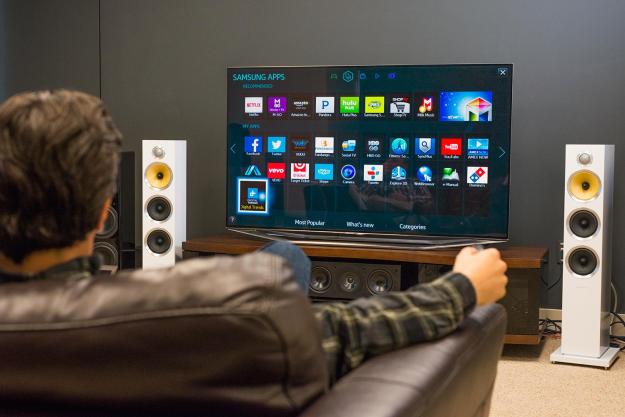 “Samsung’s H7150 represents one of the best values at its price point in today’s TV market, and should be on the short list for anyone looking for a quality 1080P TV.”

For a run-of-the-mill 1080p LED TV, it’s pretty hard to feel sexy these days. The 4K UHD revolution is on the move (scarce though the content may be at this point) and the death of plasma leaves little for regular HD TVs to brag about, especially those without the full array backlighting and local dimming that helps LED panels compete with the visual spectacles proffered by the screens of tomorrow.

This is the somewhat unenviable position in which we find HDTVs like Samsung’s H7150 — an affordable, feature-packed display that is capable of beautiful things when the lights are on, but falters in the dark a bit (still, it far exceeds its cheaper sibling, the H6350 in that regard). And while we wouldn’t push the H7150 on super-discerning buyers, its talents and feature set make it an attractive choice for more casual viewers.

The H7150 is one of the most physically attractive TVs in its class. Sleek lines of matte chrome sparkle seductively along the angled stand at the bottom, running into a thin border of silver along the screen. As soon as it hits the stand, the TV stakes its claim as an attractive addition to any living room, and the large 65-inch model sports enough style to keep it from crossing into eye-sore territory.

Accessories in the box include two remotes — both a basic wand, and Samsung’s new pod-like motion remote — as well as batteries, two pairs of Samsung’s active shutter 3D glasses, stand and hardware, and set-up instructions.

For a TV at a pretty approachable price point — as low as $1,700 for the 65-inch version — the H7150 leans charmingly into premium territory when it comes to overall design, though the screen is a bit more reflective than we would like, meaning living room lighting will need to be kept out of line of sight.

The TV is plenty thin, measuring a mere 1.4-inches front to back, and the entire unit weighs just over 55 pounds, placing it right in the middle of the spectrum for today’s 1080p displays, and around 7 pounds lighter than the similarly-sized H6350. At the back panel rests an ample collection of inputs, including 4 HDMI (one with ARC), 3 USB, an Ethernet port, a hybrid Component/Composite input, a Coaxial input, an infrared output, and both digital optical and analog audio outputs.

As mentioned, the H7150 comes with two remotes — a classic wand, and a clever new Smart Touch motion control “pod,” which replaces Samsung’s previous touchpad remote with a new design that acts more like a Wii controller. Touching a central cross-hair key activates a blue cursor on-screen for navigation, while surrounding buttons allow for control over apps that require keyed input like Netflix, without moving your thumb. It’s an intuitive system that’s easy to use, and will likely be carried into Samsung’s new 2015 lineup arriving this Spring.

Tapping the Smart Hub button on either remote calls up Samsung’s well-stocked Smart platform, which proffers the most apps out of any major brand. Like the H6350, the new H7150 struts Samsung’s upgraded layout, which combines the ability to access the company’s classic 5-panel carousel along with a quick-access band at the bottom featuring pertinent streaming apps like Netflix, YouTube, Amazon, and HBO GO.

Clicking on the oval icon above the band pulls up the hub, landing first on an organized collection of local TV content that allows you to keep watching TV while you search. Scrolling left to the second page calls up a more comprehensive collection of apps, while subsequent pages feature games, multimedia, and on-demand content suggestions.

A few simple steps will get the TV set up. Enter your location, connect to the Internet, pair up the new Bluetooth remote … the TV will even control your cable/satellite box if you want.

With the basics taken care of, picture quality can quickly be optimized, though in true Samsung form, it looks pretty good right out of the box. After selecting the Movie mode under the Picture settings, we made slight adjustments to Backlight, Contrast, Brightness, and Color. We also ended up disengaging any and all digital wizardry under the “Advanced Picture” menu, and deactivated all motion smoothing and de-judder processing.

The H7150 dazzles in the daylight, especially when you’re seated dead center in front of the TV, thanks to excellent brightness and colors that are vivid without being oversaturated. Flesh tones remain realistic across all types of programming, and extremely colorful scenes engage you without pulling you out of the moment.

The bright screen dazzles in the daylight, but in the dark, mediocre black levels leave something to be desired.

The image is also extremely sharp, exposing grainy backgrounds in film content, and rendering cleaner content like animation with solid uniformity. The cartoon Archer, for instance, looks clean as a whistle, even from very close up — an impressive feat for a 65-inch display. There’s some noticeable motion blur in scenes when the camera moves quickly, but the issue is pretty minor and not likely to distract most viewers. For many, the H7150’s bright-room performance may be enough to make this feature-loaded TV an easy choice.

However, more discerning viewers will notice issues that just can’t be helped with an edge-lit LED display that employs limited backlight dimming. In a dark room, four highly visible blooms appear at the corners of the screen like spotlights on a billboard, and there’s a bit of halo around bright objects on black backgrounds, noticed most prominently in the center of the screen. The issue can be hard to ignore when watching movies because the letterbox bands (black bars) at the bottom and top tend to get washed out.


Black levels also don’t reach far past gunmetal gray, which makes deep space scenes or the spooky black tunnels in Prometheus less impactful. And standing up or moving even slightly off axis exacerbates this problem, clouding over the entire image.

On the plus side, while the picture doesn’t get as dark as we’d like, the TV does a much better job with shadow detail than the H6350. There’s a night-and-day difference in scenes like Snape’s entrance to the Death Eater meeting in Harry Potter and The Deathly Hallows, revealing clear, distinct images that were lost to the background on the lesser TV. We’d love to see full-array backlighting with multi-zone local dimming on a TV at this price point soon, but for now, that’s not happening.

If 3D is your bag, you can do a lot worse than the H7150. We’re not wild about the active-shutter 3D, which requires batteries for the glasses, dims the image, causes flicker, and can induce eyestrain for some, but the TV’s high brightness helps negate the dimming issue, and hey, at least you get two free pair of shades, right?

While there’s not much presence or detail to be had here, the H7150 steers clear of the sharp, sizzling treble we’ve come to expect from thin displays. Two 10-watt “subwoofers” provide some depth and low end presence, and help to smooth over the topside, making this one of the better ultra-thin displays when it comes to sound performance. Still, if you care about definition and potency, you’ll want to consider a sound bar or some other home theater solution.

The H7150’s premium user experience, sexy design, bright and brilliant picture, and bevy of features make it a top choice for the average viewer. Those looking for dark-room, home-theater-style TV, however, will find the H7150 isn’t a replacement for a plasma TV or an LED TV with more advanced backlighting. Still, the H7150 represents one of the best values at its price point in today’s TV market, and should be on the short list for anyone looking for a quality 1080P TV.

Topics
The best Bluetooth speakers for 2023: Marshall, Sonos, JBL, and more
NAD’s CS1 adds wireless streaming music to any audio system
The best Dolby Atmos soundbars for 2023
The best Blu-ray players for 2023
This massive OLED TV has a $1,000 price cut at Best Buy today
I replaced my kitchen TV with an Echo Show 15 — and I kinda liked it
The best HDMI cables you can buy in 2023
The best speakers for 2023: great hi-fi options for music and more
Why the Nest Hub Max still rocks as a kitchen TV
Stream live sports without cable with Sling — now 50% off
OnePlus Buds Pro 2 to support Android’s new spatial audio feature
Should you mount your TV above a fireplace?
Walmart has a 50-inch TV deal for under $200 today