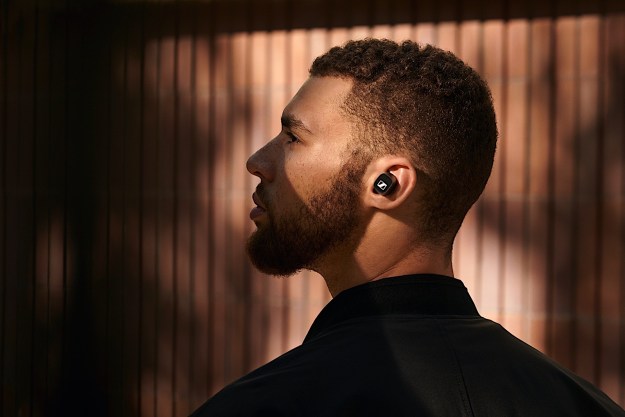 “The sound is incredible, but the cost of a lowered price is a bunch of missing features.”

But along with that excellent sound comes a fairly steep price — $300 is what you’ll pay for these earbuds. Clearly, that eliminates a lot of potential buyers.

So the challenge for Sennheiser was to create a set of true wireless earbuds that cost less without sacrificing the biggest reason for buying them in the first place: High-quality sound.

Its answer to that challenge is the $200 CX 400BT True Wireless.

Their price is definitely more palatable, but do their overall feature set and performance make them a worthwhile investment when you consider how many other excellent earbuds can be had for the same, or similar, money?

All of the packaging is highly recyclable except for the black foam liner pad glued to the inside of the box.

Big and boxy are the words that best describe both the CX 400BT and their charging case.

Though Sennheiser has made an effort to reduce how bulky these earbuds look by giving them a rounded-rectangle shape (the word “squircle” comes to mind), there’s no hiding the fact that they are big.

To be fair, though they do stick out more than Apple’s AirPods or AirPods Pro, they aren’t as gargantuan as Soundcore’s Liberty 2 Pro, or Sony’s WF-1000XM3 or the WF-SP800N.

There is an upside to the CX 400BT’s size — the earbuds are relatively easy to pluck from their charging case sockets in spite of the powerful magnets that keep them from falling out. They’re also a little easier to stick in your ears.

The glossy outer surface of the earbuds, with Sennheiser’s stylized S logo, serves as the touch controls.

On the interior face of the earbuds, you’ll find tiny LED indicator lights. They show you the power and/or pairing status of the earbuds. Solid red means power on, flashing blue/red means pairing mode, and flashing green/red means that the earbuds are pairing with each other.

The charging case’s small LED near the hinge uses different colors to reveal the battery status of both the case and the earbuds (depending on whether the earbuds are docked or not), which can be a tad confusing.

The charging case’s lid is well built, with a wide hinge that can snap between open and closed positions. A strong magnet keeps the lid shut tight, but is easy enough to open.

The CX 400BT are comfortable to wear, but they come with a caveat: In order to get the best sound quality from any set of in-ear true wireless earbuds (the kind that uses silicone eartips), you need to get the tips far enough into your ear canals to create a really good seal.

There are two parts to this equation: You’ve got to find the right size of ear tip, and you’ve got to be able to physically get that silicone tip all the way into your canal.

I found that the sheer size of the CX 400BT prevented me from being able to make this happen comfortably. It was doable, but I had to apply a fair amount of pressure while twisting the earbuds into place.

This had a real impact on my ability to wear them for more than an hour or so before feeling fatigued.

Compounding this problem is the very defined groove that runs around the body of the earbuds. It has surprisingly sharp edges, which I became aware of as I shifted and shoved the buds around to get a good seal.

The controls on the CX 400BT might just be the best touch controls I’ve ever used.

Given that Digital Trends’ staff writer Nick Woodard didn’t have this problem with the Sennheiser Momentum 2 True Wireless (which have an almost identical ear profile), I can only assume that this won’t be an issue for everyone, but it’s worth considering if you have small ears or you’ve already experienced this problem with other models.

Out of curiosity, I tried the earbuds with a set of Comply Foam tips that came with another set of buds, and they helped enormously. So, there are options if you’re willing to go the extra mile and buy some third-party eartips.

The controls on the CX 400BT might just be the best touch controls I’ve ever used. I’m not a fan of touch controls for the simple reason that they’re so hard to tap with any kind of consistent response. Sometimes the taps register, sometimes they don’t. Physical buttons are far more predictable.

But the CX’s touch controls are exceptional and never failed to respond. I especially liked the fact that a subtle confirmation tone is generated when a tap is registered — it’s a great way to know if the tap worked or not.

The existing tap scheme is easy enough to remember, and it gives you control over volume, call answer/end/decline, track skip forward/back, and voice assistant access (Siri/Google Assistant). If you don’t like the way it works, the Sennheiser Smart Control app lets you assign any function to any tap sequence on either of the earbuds — something all true wireless earbuds should offer.

Speaking of the Smart Control app, it’s not required to use the CX 400BT (they’ll pair with your device without it), but I highly recommend using it anyway. Not only does it let you configure the controls, but it also gives you access to the earbuds’ built-in equalizer and lets you quickly shift between previously paired devices.

This isn’t the same as Bluetooth Multipoint, which enables two devices to be paired simultaneously, but it’s the next best thing.

Sennheiser claims a seven-hour battery life for the CX 400BT on a full charge, with an additional 13 hours in the charging case.

I set them at 75% volume and let them run a continuous radio stream. Seven hours later, they were still going, so I’m confident the seven-hour claim is realistic.

But that’s still on the low side of average for true wireless earbuds right now. You’ll only get slightly more than five hours out of the $150 AirPods and $230 AirPods Pro. Jabra’s $200 Elite Active 75t get 7.5 hours. But the $200 Sony WF-SP800N can deliver up to 13 hours with active noise cancellation turned off, and the RHA TrueConnect 2 can last for 9.5 hours. Samsung’s Galaxy Buds+ only cost $150, but they can run for 11 hours.

Of more concern is the charging case. It can only extend your playtime to a total of 20 hours, making the CX one of the shortest total duration earbuds at any price. Given that the charging case isn’t exactly petite, I’m not sure I understand why Sennheiser wasn’t able to include a bit more portable power.

Their quick-charge option is somewhat better by comparison than the competition: 15 minutes will get you one hour, which is the same as the Jabra Elite Active 75t, but not as fast as the AirPods and AirPods Pro, which can do the same in just five minutes. Meanwhile, the Sonys will give you almost 90 minutes on 10 minutes of charging.

Remember how focused I was on getting a good fit? It’s not just about comfort.

It’s a good thing I tried those Comply Foam tips. From the moment I put them in, I was in sonic ecstasy.

Using the factory-supplied eartips, I was beginning to doubt Sennheiser’s claim that the CX 400BT use the exact same drivers and equalizer technology as the top-rated Momentum 2. What I heard was nowhere close to Digital Trends writer Nick Woodard’s words of praise: “I’ve heard some pretty stout earbuds, but this is just a different experience entirely. The sound pulls you into the music and engulfs you as you pick up notes and instruments that just aren’t present in competitors.”

It’s a good thing I tried those Comply Foam tips. From the moment I put them in, I was in sonic ecstasy.

Sure enough, the CX 400BT can stand toe-to-toe with the best true wireless earbuds, and when paired with an aptX-capable sound source, they’re very hard to beat.

Stereo imaging, precision, depth, and width of the soundstage — they’re all superb. Bass, midrange, and highs are all given the first-class treatment, with each allowed to shine while never stomping on the others’ feet.

This kind of sound quality arguably helps all genres sound their best, but you really appreciate it on tracks that demand fidelity across a range of frequencies. Little Something, a duet by Sting and Melody Gardot — a song that I just discovered via Tidal — is a perfect example. It features two vocalists backed up by a rich mix of acoustic guitar, bass, drums, and synth. But the musicians all apply a subtlety to their playing, which a lesser set of earbuds would muffle or mask. The CX lets you appreciate each detail.

It’s also worth noting that if you’re not crazy about the factory EQ, the Smart Control app lets you tweak it using one of two equalizer formats. Whichever you choose, the changes you make are stored aboard the earbuds so that you can enjoy the results regardless of the music source or the device you use for playback.

The CX 400BT are supposedly optimized for voice calls, but I found they generally performed no better than many less expensive models I’ve reviewed.

The lack of a hear-through mode proved frustrating.

Voice quality was good when conditions were quiet, but as is the case with so many true wireless earbuds, they struggled when other sounds vied for attention.

Passing cars, distant construction sounds, overhead helicopters — each of these noises had a tendency to push the speaker’s voice around. At no time did this prevent the speaker from being understood, but it was at times quite distracting.

Those Comply Foam eartips that created such a wonderful seal for sound quality also blocked a good chunk of my own voice on calls. The lack of a hear-through mode proved frustrating.

I’d say the CX 400BT are perfectly adequate for the occasional call, but quieter locations should be favored for anything longer than a quick “I’m running late for our meeting” message.

Given that Sennheiser has managed to equip the CX 400BT True Wireless with the same sound quality as earbuds that cost $100 more, corners needed to be cut elsewhere.

There’s no wear sensor to automatically pause the music when you remove an earbud. There’s no active noise cancellation (ANC). There’s no hear-through mode for piping in outside sounds when you need to have a conversation, and there’s no IPX rating for water or dust resistance.

The Sennheiser CX 400BT offer superb sound for their $200 price. If only they had a few more bells and whistles, we’d be in true wireless earbud heaven.

I don’t think you’ll get better sound quality from another set of $200 true wireless earbuds, but you can come close. The Jabra Elite Active 75t and the Sony WF-SP800N are both $200, and while they may not quite match the CX 400BT’s sonic purity, they overachieve on every other feature, like comfort and fit, hear-through, battery life, ANC (in the case of the Sonys), and water resistance.

Without any official protection from water, you may need to take extra care with the CX 400BT, but they (and their charging case) are very well-built and should last many years. Sennheiser backs them with a two-year warranty, which is twice as long as some other brands.

It’s a tough call. If getting the absolute best sound quality for your money is your top priority and you can make your peace with CX 400BT’s considerable list of absent features and potential fit issues, then yes, I recommend them. But I’d take a long, hard look at the many strong competitors at this price before buying them.