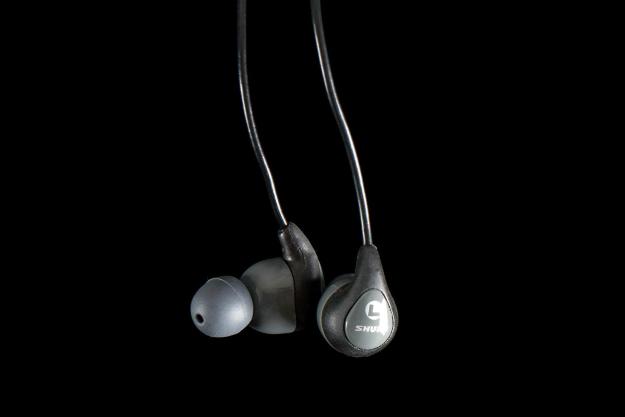 “Pound for pound, Shure’s SE112 are some of the best budget buds on the market.”

The steadfast engineers at Shure have cranked out an abundance of awesome headphones in their time. The company’s $650 SRH1540, for instance, rank as one of the highest performing pairs of cans we’ve ever had the pleasure of putting on.

But working with premium components surely makes crafting glorious sound a much more feasible obstacle to overcome. What could the same engineers do for a pair of headphones that cost a tenth of the price?

Perhaps looking for a challenge (or a share of the booming budget headphone market) Shure set out to easily best your budget buds with the $70 SE112, which now retail as low as $50 online. And while they’re not without their faults, these earphones definitely set the bar for low-cost performance.

No surprise: These budget earphones come in a budget box. But pulling the phones free of their inner foam cartridge, we were impressed with the overall quality of the construction. A thick rope of black cable was curled around a heavy-gauge fork at the center, stretching up to bulbous plastic earpieces that felt solid in our hands.

Accessories inside the box included a surprisingly thick packet of instructions and warranty information, along with a small felt carrying case that harbored a baggy of exceptionally large silicone ear tips.

The sheer size of these buds makes them stand out more than anything. The earpieces are covered in glossy cuts of thick plastic, with a stripe of soft rubber around the edges for easy ear placement. Apart from that, the “medium-sized” silicone tips that come attached are large and in charge — we usually go with that size, but ended up choosing the SE112’s smallest option, something that may be of concern for those with smaller ears.

Pulling the phones free of their inner foam cartridge, we were impressed with the overall quality of the construction.

The designed is tailored around delivering good passive noise isolation, perhaps helping to explain the oversized tips, and housings large enough to fill out your ear canal. We noticed right away that the stereo logos on the exterior of the earpieces are upside down when inserted in the standard configuration – a good indicator that the SE112 are designed to be inverted, with the cable worn around the back of the ear (more on that in the comfort section).

Despite their price point, these headphones do exude an air of quality. Apart from the robust housings, we like the extra-long 50-inch cable, which comes complete with a sliding clip-piece for cable management. However, a glaring omission quickly made itself apparent when we extended the cable for our maiden voyage: The SE112 offer no mic or control piece on board. That’s a big omission for an entry-level pair of earbuds, considering most people will be targeting a replacement for their stock phone headphones, which almost always come with controls and a mic.

As for the audio specs, Shure does not disclose the size of the driver that powers the SE112, but we do know that it’s a dynamic driver (no surprise there, at this price) and is capable of a respectable 102 dB SPL, or max volume, with a claimed frequency response of 25Hz to 17kHz.

The SE112 are ostensibly designed to be worn inverted, with the cable wrapped around the back of the ear. However, the angle of the driver housing is such that the buds work in either direction, and we found them to be more comfortable (and much easier to take in and out) in the standard earbud configuration, with the cable extending from the bottom. We also noticed nominal performance differences.

As advertised, we enjoyed above-average passive noise isolation with the SE112 – in either position. With a bit of music going at mid-level, the earphones basically wiped out the chaos of the outside world, even on a crowded bus ride home.

There’s no doubt that the SE112 are one of the best $50 pairs of earphones we’ve spent time with. However, considering their paltry company, that’s not exactly a resounding endorsement. What’s more impressive is that these headphones also held their own against earphones that cost twice as much. And when we put them up against competitors like Apple’s EarPods, or even the Sennheiser 30G, it was no contest.

What makes the Shures most impressive is their ability to deliver a pure, open sound without the kind of muddy overtones that clog up the lower register of so many of their peers. Sound is clear and tight in the bass, and finely focused in the midrange and treble. Some users may find the light touch up top a little too snappy, and lament the lack of pounding bass – we could’ve used a bit more ourselves at times – but when it comes to a choice between clarity and “here comes the boom,” we’ll take the former every time.

What makes the Shures most impressive is their ability to deliver a pure, open sound.

The SE112 also revealed more than their fair share of detail. We never enjoyed the rich, textural exploration of instruments that comes with pricier fare, but the wide-open soundstage offered room enough for clean separation of each track, and even a bit more. A tour of She’s Leaving Home from Sgt. Pepper, for instance, dug up some edgy grit from the languid string orchestration, and even allowed for the sweet echo behind the vocals and plucked harp strings to flutter audibly in the background.

Moving to some heavier numbers, like the Black Keys’ She’s Long Gone, the ‘phones showed a pretty firm hand at delivering the richer colors in the dusty fuzz bass and guitar, and some nice potency from the heavy kick drum as well. However, the same punchy rock tunes also revealed some of the headphones’ limitations. Heavy crash cymbals brought out some distortion, and the chaos of overdriven guitars occasionally sounded a bit pinched and tight, as well. The sound also got a little too sharp at the attack on hotter vocals and snare hits, revealing too much sibilance at times.

Still, the SE112 are pretty adept at revealing the subtler moments we don’t expect to hear from budget earphones, like that extra tail of reverb from vocals, or the metallic shift of an 80s synthesizer. And even when the ‘phones seemed to get in a little over their head on brighter tracks like Van Hagar’s 5150, bouncing back to other buds at a similar price reminded us how high above the fray these headphones were actually riding.

Pound for pound, Shure’s SE112 are some of the best budget buds on the market. If quality audio is of a high concern, we don’t normally recommend you pay less than $100 for a pair of earphones. But if you just don’t have the cheddar, you should probably pick up the SE112.