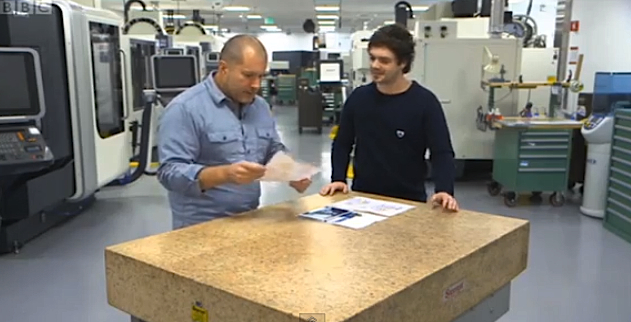 Ask any Brit, young or old, to name a TV show they enjoyed watching as a child and the likelihood is Blue Peter will be top of the list.

Their eyes may even glaze over as they recall with nostalgic pleasure the time presenter Anthea Turner demonstrated how to make your very own Tracy Island model, the sad day when presenter Janet Ellis left the show, and the unfortunate incident with the excited elephant.

Neither Blue nor having any clear connection with the name Peter, the BBC show launched way back in 1959 and is still going strong, making it the longest running children’s TV program in the UK, and possibly in the entire universe.

The show is held in such high regard that when its researchers called up Apple design guru Sir Jony Ive for an interview, he leapt at the chance. Yes, even Jony watched Blue Peter when he was little.

A popular segment in the show has a presenter making something useful (pen holder) or fun (Tracy Island) out of discarded items like empty egg box cartons, cereal packets and detergent bottles. It’s perfectly possible that it was this part of the show which inspired Ive to go on to become a designer.

In his recent Blue Peter appearance, Ive talked about his early memories of the show before being asked by presenter Barney Harwood to offer his thoughts on a selection of entries for a design competition the program was holding.

Children had been asked to come up with a product that combined a school bag, lunch box and pencil case. Ive offered a series of enthusiastic comments and seemed genuinely interested in the entries brought before him.

Asked how he would’ve approached the brief, the British designer said that with regards to the lunchbox, he’d immediately banish the word “box” from his mind because it gives you “a bunch of ideas that could be quite narrow because you think of a box being square and like a cube.”

Offering a little insight into how his design team goes about things at the Cupertino company, Ive commented, “We’re quite careful with the words we use because they can determine the path you go down.”

A short video shown to Ive (on an iPad, of course) included comments from a few of the competition entrants. “You’ve inspired us to design things that people use every day,” said one.

But for Apple’s senior vice president of industrial design, the best was yet to come. The show presented him with a gold Blue Peter badge, a rarely awarded prize given, as it says on the show’s website, “for really outstanding achievements like saving someone’s life or showing amazing bravery and courage.” Or in Ive’s case, for designing the iPhone.

Last up, Ive had a surprise in store for Harwood, presenting him with an aluminum Blue Peter badge so large that if you were to pin it to your shirt it would probably tear it right off.

Ive’s appearance on the show is a fun six-minute segment and you can watch it below.

What is Apple TV+? Everything you need to know