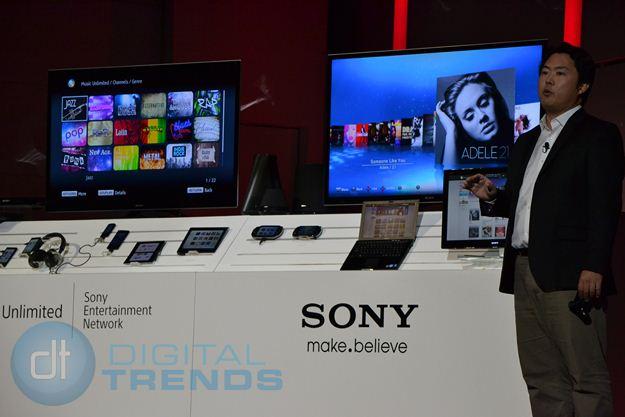 Sony’s predictably large-scale press conference yielded a few surprises, though not the sort we were anticipating. New additions to the A/V category included the return of the Walkman, some balanced armature earphones, version two of Sony’s foray into the audiophile speaker market, some new Google TV products, a new LED TV technology, the Fresh Prince and an American Idol.

If you remember Kool and the Gang, then you probably recall the Walkman-the first world’s first easily portable music player. Now back from an electronics
coma, the new Walkman looks a carbon copy of an iPod Touch at first glance but, in truth, is pure Sony. The Z1000 series Walkman runs on Android Gingerbread, offering access to the Android app market, and sources content from Sony’s online music catalog. Sony says Windows users can easily port their iTunes catalog or Windows Media tunes over to the Walkman using a provided transfer system. The new Walkmen also feature built-in digital amps for what Sony describes as superior audio output. The 8G Z Series will retail for about $249.99, the 16G for about $279.99 and the 32G for about $329.99.

Sony’s balanced armature earphones looked pretty slick from our seat. The XBA series includes four models, which each model number indicating the number of drivers enclosed in the earphone housing. The top-of-the-line XBA-4 features a tweeter, super tweeter, woofer and super-woofer. Perhaps more impressive are the XBA-NC85D noise-cancelling in-ears which use drivers small enough to allow the noise cancelling circuitry and battery to fit in the earphone itself. No external box necessary. Sony says the battery life in these noise-cancellers goes up to 20 hours and that the set is capable of reducing ambient noise by up to 97.5%

Coverage of the latest addition to  Sony’s outrageously expensive SS-AR speaker series was brief. All we know is that the SS-AR2 are here and likely carry a price tag that is likely as lofty as their $27,000/pair siblings. We’re working on getting a pair.

Sony has beefed up its Google TV offerings by expanding the technology beyond its TVs. Google TV now powers the
NSZ-GP9 Blu-ray Disc player and NSZ-GS7 Network Media Player. The two players come with a slick new remote featuring a touch-pad on one side, Qwerty keyboard on the other and a built-in microphone to accept voice commands. There was also talk of a Blu-ray player with 4K upscale capability.

Possibly due to time constraints, Sony barely touched on any new TV developments, but we managed to dig up a little bit of dirt. Sony touched on what it is calling Crystal LED Display technology. Apparently it isn’t OLED. Sony describes it as a “self-emitting display” with ultra fine LEDs mounted in the RGB color space. Apparently the RGB LED light source is “mounted directly to the front of the display”—but it’s not OLED. Confused? We are too. Sony has a 55-inch prototype on display, so we’ll get the scoop from Sony and some hands on time later this week, then fill you in on what we learn.

As for OLED and 4K TV? It’s all “in development”. As a matter of fact, a lot of Sony hardware us under development…hey look over there! It’s Will Smith and Kelly Clarkson!

Google Chromecast tips and tricks to make you a master caster
The best Bluetooth speakers for 2022: Marshall, Sonos, JBL, and more
Best 75-inch TV Deals: Get a big-screen TV for $630 today
Best 70-inch TV Deals: Supersize your screen from $500 today
Best Sonos Deals: Save on the Sonos Move and Sonos Roam
How to download movies and shows from Amazon Prime Video
AMC Plus Free Trial: Stream hit shows like The Walking Dead for free
Prime Video’s first solo Thursday Night Football NFL game went … fine
Amazon Fire TV tips and tricks: 8 ways to master your streaming
What’s new on Hulu in October and what’s leaving soon
What’s new on Disney+ in October 2022
The ‘streaming wars’ aren’t what you think
How to set up a Google Chromecast to get streaming fast