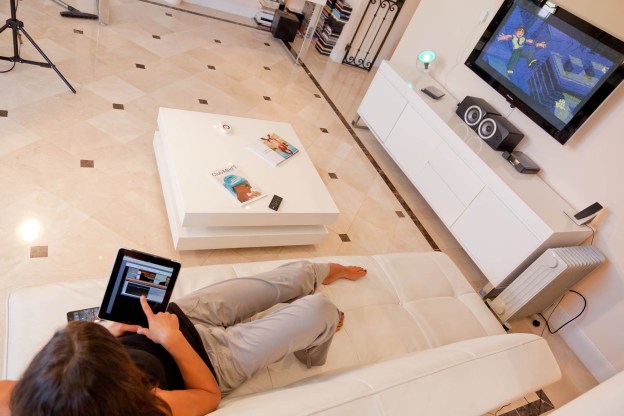 It’s time to talk about something we’re doing wrong. This might sound arbitrary and pedantic and like something only a handful of us care about, but it’s going to become more and more important, so let’s just get ahead of the curve and clarify something:

The second screen and social television are not the same thing. Except sometimes … when they are. Most of the time. Kind of. Maybe?

Digiday recently touched on the confusion in this terminology. We’re using the terms interchangeably but in reality, they’re defining two different sides of the evolving real-time TV market – however, there is ample overlap.

Second Screen generally refers to an application that complements your TV viewing. These apps can be social, but they aren’t necessarily. Lots of second screen apps allow you to dive deeper into the experience. For instance, ESPN apps that show you the stats of who’s playing, or apps for TV series that dive into the world of the characters.

Founder and CEO of Zeebox Anthony Rose says that in the company’s research, there were five key factors that consumers need in a second screen app:

Social TV itself, however, is still far, far more difficult (impossible, really) to define thanks to the relatively ambiguous, amorphous nature of all things social media-related. So really, instead of a need to define the difference between second screen and social TV apps, the question really is: What is social TV?

Anything “social” is overarching and vague, and social TV is no exception. Social interaction with television content is happening with and without apps specifically targeting this market. For instance, Facebook is a “social TV” app even though it never positioned itself as such. Same goes for Twitter. And Instagram. And Tumblr. But in a handful of ways, each of these are providing a social element to watching TV. Does that make them social TV apps? That’s for us to decide, but case in point: Pretty Little Liars.

“Social TV is a rubbish term. Please kill it.”

Pretty Little Liars, for instance, is a show with an incredibly active and tuned in social media following – in part, thanks to the Instagramming, Twittering, Facebooking obsessions of its young and digitally devoted cast. The Stars of the ABC Family show have active Twitter and Instagram accounts, post plenty of behind-the-scenes looks and interact with fans. According to a recent interview with Entertainment Weekly, there used to be a sign on set that asked people not to post to social media accounts, but after realizing it was adding to the hype instead of diminishing it, the sign was taken down.

The season 2 finale recently made “social TV” and Twitter history: 645,000 tweets were sent during the first showing of the episode, reaching a rate of 32,000 tweets per minute. In total, 1.6 million PLL-related tweets were sent by 667,000 users that day.

There is a Shorty award for “The Best Prettylittleliars in Social Media” in which the most actively tweeting fan will win.

Clearly, PLL is social TV – but then take a look at some of the available second screen apps. The selection is fairly lacking.

“Social TV is effectively Twitter and Facebook,” Boxfish cofounder and CEO Eoin Dowling says. “There have been many attempts over the last couple of years to build businesses off the back of the social TV hype – most are now in the deadpool. The fact is that Twitter and Facebook own social TV. This has become more apparently with Twitter’s movements in the space – the Bluefin acquisition and deal with Nielsen are great moves toward monetizing their position. And they have a lot more to come. Facebook will be the dark horse here also, it has a great position and no doubt will reveal its intentions soon.”

“Either way, social TV is a rubbish term. Please kill it.”

Point taken: Social is a vertical of everything and anything that has to do with media (if this isn’t true for your media content, you’re officially doing it wrong).

“Tweeting ‘I’m watching this football game,’ is no more social than being stranded on an island and throwing out a message in a bottle saying ‘I’m stuck on this island.’”

Right now there are a disappointing amount of applications out there that throw a Twitter stream on the sidebar or include a “share” button that call themselves social, when really all that does is allow for passive activity – you can see what’s happening, but you can’t do much (or anything) about it. “The ‘second screen,’ be it tablet or smartphone or laptop, can and should serve as a conduit that facilities ‘social TV,’” TweetTV founder and CEO Bradley Markham says. “But the problem is that most of what is considered ‘social TV’ right now has little actual ‘social’ value. A second screen that offers time-synced content in relation to a TV show, for example, is not social.”

Really, the fact that we’re experiencing some confusion between second screen and social TV apps is because we’re still uncertain what qualifies as social. We instinctively know what isn’t social, but it’s become a broad, vague industry term that too many undeserving apps and services claim to offer. Slap on a share button and you’re good to go! Except that you’re not.

“Simply tweeting to say ‘I’m watching this football game,’ is no more social than being stranded on an island and throwing out a message in a bottle saying ‘I’m stuck on this island.’ That message wouldn’t be social until someone actually responded,” Markham explains.

Then there’s the fact that all of these apps can actually just be pulling us out of the viewing experience.

“There’s a ton of overlap between social TV and second screen apps,” says RUWT?! founder and CEO Mark Philip. “But to paint with broad strokes, in social TV I see the actual TV as the protagonist and the smartphone as the foil, while in second screen apps, the roles are actually reversed.”

“Our phones have intuitive, comfortable interfaces, but are filled with distractions that pull viewers away from the content on the TV,” he says. “As the ability to use your phone or tablet as your remote becomes more commonplace, the TV and the smartphone will become peers in the relationship, making the apps infinitely more useful to – and sought after by – users.”

As it goes with all things digital, we’re laying the tracks while driving the train. And it’s especially confusing because everyone is involved in this building process; it’s not just app developers and TV producers or networks, it’s anyone with a Tumblr account who knows how to make an animated GIF or who has the potent combination of bravado, sarcasm, and immunity to Twitter haters to start a parody account.

Admist all of this confusion, a few things are true: Consumers want to interact with TV, and they want to do it using popular social platforms. A good second screen app is going to know this, and leverage the mechanisms already making this happen. So pay attention to us, developers. We’re creating loads and loads of content and conversation for you. Less time spent trying to make a “social app” and using what’s already out there is a good starting point.

Topics
This massive OLED TV has a $1,000 price cut at Best Buy today
LG’s latest portable CineBeam Projector now available for $600
What is a laser TV?
Best Amazon Echo Deals for January: Get an Echo Show for $45
The best TV shows on Amazon Prime right now
Best new movies to stream on Netflix, Hulu, Prime Video, HBO, and more
I replaced my kitchen TV with an Echo Show 15 — and I kinda liked it
The best HDMI cables you can buy in 2023
The best speakers for 2023: great hi-fi options for music and more
The best Blu-ray players for 2023
Why the Nest Hub Max still rocks as a kitchen TV
Stream live sports without cable with Sling — now 50% off
OnePlus Buds Pro 2 to support Android’s new spatial audio feature