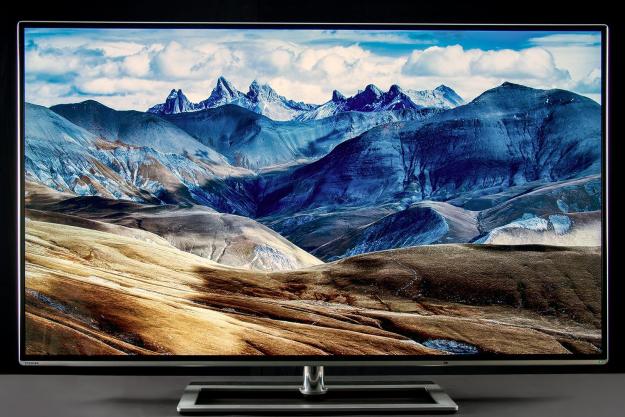 “We’ll stop short of recommending this television, but we can’t deny it will be an appealing option for those looking at premium 1080p sets in the same price range.”

Toshiba L9300U series information: This review is based on our hands-on experience with the 65-inch 65L9300U TV. However, our observations also apply to the 58-inch 58L9300U and the 84-inch 84L9300U. According to Toshiba, the three sets differ only in dimension and weight and offer identical features and performance.

With the Super Bowl fast approaching and prices bound to drop even further as the next generation of Ultra HD televisions nears the market, we think Toshiba’s L9300U is going to be hard to resist. After all, conventional wisdom tells us that, even without 4K content, Ultra HD televisions should also make the best TVs for watching 1080p content. Right? With that in mind, we worked Toshiba’s 65-inch Ultra HD over for a few weeks to see if it is the sort of TV you’d want to live with on the long term.Having reviewed Samsung’s F9000 and LG’s LA9700, we’ve gone on record in two reviews as saying that buying a current-generation Ultra HD TV simply doesn’t make sense. It would be fair to ask, then, why we would bother to review yet another current-gen Ultra HD set when we’ve already made our opinion clear. The answer is simple: Toshiba’s 65-inch L9300U is currently selling for $3,600 online. To put that in perspective, it’s at least $900 less than any other top-tier competitor at that size, and dangerously close to equally-sized top-tier 1080p TVs.

If you’re not in a hurry to buy, it’s worth pointing out that this particular television has absolutely no bearing on what Toshiba will be bringing to market next year. As we detail in our report from CES, Toshiba has instituted a long list of reforms and hardware upgrades for its next line of televisions, and we think those efforts will put it in a very strong position when they arrive. With that in mind, let’s take a look at what’s out now.

The 65-inch model we received for review is one of the heaviest TVs we’ve ever tested. At just over 100 lbs. it tops the LG LA9700 by 10 lbs., and the Samsung F9000 by a good 30 lbs. You feel that weight as you lift it from its box, too. Have a (strong) friend around for any setup or mounting of this television, because you’ll need them for sure.

We’d like to point out, though, that Toshiba’s packaging was as effective as it was manageable. You’d be amazed at some of the convoluted foam contraptions we see these TVs arrive in – putting them back together the right way can be a nightmare. Fortunately, Toshiba gets it right here. Inside the box we found a table-top stand and the requisite hardware, four pair of passive 3D glasses, a wireless keyboard, remote control and batteries for the remote.

While the L9300U may weigh a bit more than its contemporaries, it certainly doesn’t look bulky for it. The TV lacks the insanely trim bezel found on Samsung’s set, and it is a touch deeper than LG’s, but it still looks marvelously fit for such a large-scale television. While we haven’t had a chance to really give the 58-inch model a proper once-over, we imagine it has the same appeal.

While the L9300U may weigh a bit more than its contemporaries, it certainly doesn’t look bulky for it.

As we stared at the dead-black panel, we noted a fair amount of reflection bouncing back from it, even in relatively dim light. The mirror-like surface does great things for the picture when it is bright, but is decidedly less desirable when it is the least bit dim. Just a touch of anti-reflective coating would have gone a long way here.

We appreciate that this television will swivel on its base, simply because this handy feature is often overlooked by other manufacturers. However, in the case of this television, its ability to swivel is crucial to anyone sitting off axis, because its off-axis performance leaves much to be desired. More on that later.

An Ultra HD television, the L9300U features a resolution up-scaling feature and some other processing meant to clean up less-than-optimal video sources. In this set, Toshiba touts its Cevo 4K 2nd Generation Quad + Dual Core Processor along with local dimming technology with “more dimming zones” to enhance black levels. As previously noted, this is a 3D-capable set.

Aside from that, the L9300U shares a lot in common with the L7300U series we recently reviewed, including Smart TV functionality with a full Web browser, plus the same keyboard with trackpad and remote. One notable benefit is the TV’s ability to decode and play back MKV files, a popular format for ripped DVD and Blu-ray discs commonly used by folks who maintain a media server at home. For us, this turned out to be a particularly nice perk.

As we first powered on the L9300U, it was immediately apparent that it was a bit speedier than the L7300U we had tested just weeks before. That television took a rather long 17 seconds until it put an image on the screen, and a few more on top of that before you could really do anything such as change the inputs or launch the smart TV interface. With the L9300U, that number came down enough that we didn’t bother to pull out a stopwatch to find out what the actual time was. Our assessment: It is acceptably short.

When the TV is powered on, the set’s zones of locally-dimmed backlights are immediately evident, thanks to clear segmentation showing through the panel. On a TV of this size, it’s really difficult to pull off even backlighting without a full array of LEDs, but the L9300U seems to suffer a bit more than other edgelit tier-1 televisions did in this regard. With that said, it’s still a few notches above some of the budget Ultra HD televisions we’ve looked at over the year.

Since 4K content is scarce, we started out with Blu-ray material and worked our way down in quality of video through cable/sat HD, streamed HD, cable/sat SD and streamed SD. Streaming sources included content on our own media server as well as content delivered by Netflix, Hulu Plus and Vudu. Associated equipment included an Oppo BDP-103 Universal Disc Player and a Roku 3.

On a TV of this size, it’s really difficult to pull off even backlighting without a full array of LEDs, but the L9300U seems to suffer a bit more than others.

Blu-ray content looked very good, due in no small part to the Oppo’s excellent 4K upscaling chip. When we disabled the Oppo’s upscaling capabilities and let the L9300U take over, we noticed a very slight drop in overall sharpness of the image, though we don’t expect most casual viewers would notice the difference. We think that most consumer-level Blu-ray players will have a tough time competing with the upscaling work the L9300U did.

As the quality of our content dropped, it became clear that the TV’s extensive suite of processing options were going to be necessary to keep the picture looking clean. By default, we turn nearly all processing off before starting our evaluation. We found that, without the resolution upscaler, MPEG noise filter, digital noise filter and other settings turned on to at least medium, lower-quality content looked dismal on the massive 65-inch screen. For example, dark areas became overrun with large, blocky, murky boxes that evoked an effect similar to listening to a really low bitrate MP3. The trouble here is that the bitrate, compression and resolution of some of the content we used really wasn’t that low.

To be clear, it is usually the content source that makes a TV look terrible. Most TVs have to work untold magic to get compressed cable and satellite (even HD stations) content to look good. The L9300U can do it, but it has to use every weapon in its arsenal and, even then, we felt like it didn’t do quite as good a job as the LG or Samsung we reviewed. Once again, however, we’d still place it above a lower-tier budget brand. The L9300U still provides enough of an improvement to justify its slightly higher price.

So how does the L9300U do with 4K Ultra HD content? It looks beautiful. During our evaluation using 4K material provided by Toshiba, the television’s color reproduction capabilities were fully revealed, and its local dimming technology was shown at its best when given a quality signal to work with. Blacks were shockingly and suddenly deep and smooth, and contrast was right where it needed to be. We could still see segmenting of the local dimming zones (by way of vertical lines that down certain areas of the screen) but only in particularly tough scenes, and only because we’ve been trained to look for it. None of our officemates caught it, and plenty of them took the time to stop by and marvel.

A first-generation Ultra HD television purchase just doesn’t make sense, no matter the manufacturer. Since their introduction, standards have been settled on and new apps have been developed that will make accessing 4K content later this year a real possibility, but mostly on next-generation models.

But the L9300U lures buyers in with a price point to performance ratio that bests its competition. Is this a top-performing Ultra HD TV? No. It is, however, far less expensive than the top performers, and it still manages to significantly outclass the budget brands. We’ll stop short of recommending this television, but we can’t deny it will be an appealing option for those looking at premium 1080p sets in the same price range.

Topics
Best 75-inch TV deals: Get a large screen for the Super Bowl
Klipsch follows the success of The Fives with The Sevens and Nines powered speakers
The best indoor TV antennas for 2023
The best OLED TVs for 2023: from LG, Sony, and Samsung
Peacock does away with free tier for new subscribers
Is there a Sling TV free trial? Here’s what you need to know
What’s new on Apple TV+ this month (February 2023)
YouTube TV loses MLB Network and MLB.TV add-on
YouTube TV: plans, pricing, channels, how to cancel, and more
Apple’s MLS Season Pass is about more than just streaming games
Flash sale drops the price of this 55-inch QLED 4K TV to just $370
Netflix expands its spatial audio, number of devices that can download content
Sony’s 2023 AV receivers are Sonos-ready and work with wireless speakers