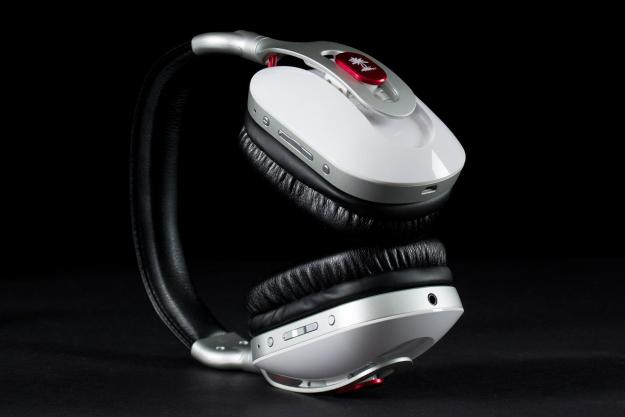 “Now that we’ve experienced the i60, it seems like the sort of product that Apple users should have had all along … it’s the sort of device you never knew you always wanted.”

Turtle Beach is like the people’s choice in the world of gaming headsets. Sure, there’s some pretty fancy high-end competition out there, but there’s something especially accessible about Turtle Beach. The gaming crowd digs its products, and so do we. The company provides quality, forward-thinking tech that performs very well, and at an approachable price point. How can you argue with that?

As such, we’re generally interested in checking out Turtle Beach’s latest and greatest; but when we heard the brand had taken a big step in a new direction … well, we were a little more than interested.

We’ve long thought that Turtle Beach had the chops to branch out from gaming-specific headsets, but it hasn’t really done so until now. Turtle Beach’s new i30 and i60 headsets are aimed in large part at Apple fans and have clearly gone through Apple’s design wringer. Turns out, underneath the glossy, Apple-friendly exterior, there’s some serious tech at play with both models.

Here we review the i60, a desktop and laptop computer-friendly set of cans which serve up wireless (or wired) movie and music audio while at home or on the go. And then some.

Apple must have some pretty stringent packaging guidelines, because the products it offers on its shelves rarely fail to impress during the unboxing phase. The i60 are no exception. A deep, heavy-gauge box with a magnetic clasp on its flap successfully delivers the premium feeling we’ve come to expect from an Apple-Approved device. Then, right on schedule, the layers come, with the headphones sitting front and center, a shrink-wrapped carrying case seated just above, and, underneath, an unmistakably Apple-esque control module seated next to a box of cables and connectors.

Having desktop control over your audio system is both handy and fun.

The control module, which is designed to connect to your computer and act as a control system, has the sort of heft and thunk-y build quality that suggests Apple built it. It feels solid in your hand, and sits with authority on your desktop.

The headphones strike a difficult balance between being heavy enough to take seriously and light enough to be comfortable. The leatherette material over the padded ear cups and headband looks almost dated to the eye, but is deceivingly soft and smooth to the touch.

Then there’s the instruction manual – or, more accurately, guide – which explains how to use the headphones. Resist any inclination to toss these aside. Maybe you’re pretty tech-savvy, but we still think you will need them. In fact, if you’re a PC owner, you’ll need these instructions as well. P.S., they aren’t included in the box.

Because the i30 and i60 bear many similarities, we’ll start out with what differentiates the two: The i60 offer Wi-Fi wireless connectivity in addition to Bluetooth (and, therefore, superior audio quality potential), 7.1 virtual surround sound, touch-capacitive controls, and a control module for chat volume, media volume, and sound presets. What you do not get is active noise cancelling, a feature reserved for the i30.

Common to both headsets is Bluetooth wireless capability, three built-in EQ presets (which can be customized via smartphone app), an invisible microphone, voice morphing (which lets you sound like a chipmunk, the devil, or God to the person on the other end of your chat or phone call) and a built-in rechargeable battery.

What makes these headphones so slick is that they perform wirelessly both at the desktop and on the go. While at the desktop, the i60 headset connects to its desktop control module via Wi-Fi for high-resolution surround audio. When away from the desk, the headset will pair via Bluetooth to any compatible device, including smartphones, tablets and laptops. The i60 can connect to up to eight devices at a time, allowing the user to listen to music or gaming audio from their laptop and take a call from their smartphone if one comes in.

Were it not for the i60s specialized control module, there wouldn’t be much to this setup section. However, since Apple and PC computers each deal with auxiliary devices in different ways, it will be necessary for some to strictly follow Turtle Beach’s setup instructions. There’s no need to freak out here; if you follow the instructions, you’ll be good. But to get the i60 doing everything they are capable of, care must be taken to set up the connected computer correctly.

When that is done, the i60 can be your go-to headset for anything that involves sound or voice. Game chat, Game audio, Skype calls, video conferences, music listening, movie watching … whatever.

You don’t often hear people say, “Don’t underestimate the value of a desktop control module!” Perhaps that’s because saying something like that won’t get you a whole lot of dates. But ”they” really should say it because these things are totally underrated. Having desktop control over your audio system – especially one in a package as pleasantly designed as the i60’s – is both handy and fun.

The overwhelming majority of gaming headsets today have on-board controls, and the i60 do too, but when you have a desktop, why not use it? When you’re gaming or working and need to make a quick volume or other sound setting adjustment, you don’t want to have to stop what you’re doing while one hand goes searching around for tiny on-board buttons hiding on the back of a headphone. It’s far easier to make a quick move to a large dial placed inches from your keyboard or mouse and quickly scroll up or down.

As far as the onboard controls are concerned, they do take some learning. The i60 has enough buttons spread out on the back of both earpieces that it will take a little time to learn which does what. In time, however, operation would probably become second nature.

Comfort level with these headphones is about par for the course. The i60 don’t exert an undue amount of clamping force, and the headband is amply padded; we had no trouble with pinching during our evaluation. The ear cup material doesn’t breath as well as cloth material, so there’s bound to be some ear sweats at some point.

Because we started our evaluations by listening to the i30, we went into our i60 evaluation expecting good things. But once we experienced the enhanced audio quality and surround-sound capability made possible through the headphone’s Wi-Fi connection, it became clear that Turtle Beach had a legitimate up-charge on its hand.

What we heard was as convincing as the best surround headsets we’ve tested to date.

To be honest, the i30 were good enough that we felt the i60 had something to prove. A $100 premium is a lot to ask for what, on paper, might seem like a marginal gain in performance. Combine that with the sacrifice of a noise cancelling option, and the i60 begin looking like a tough sell.

But the slight gain in audio fidelity, addition of virtual surround capability, and the readily available desktop controls afforded by the i60 have us thinking the extra C-note may be worth it.

From a pure sound quality standpoint, the i60 delivered what we’ve come to expect from Turtle Beach: a brilliant, exciting, high-impact sound that neither tries too hard, nor sacrifices too much. One of the things we appreciate about Turtle Beach’s approach is that its headphones never sound harsh, chintzy, or forced. The i60’s treble and midrange is capable of adding detail to subtle sounds like footsteps, breathing, cymbals and brass overtones, but it’s never so aggressive that it makes you want to take a break. The midrange, while a bit bold at times, delivers clear, intelligible dialog in movies and plenty of the meat we long for in music instrumentation, both acoustic and electric. Bass is on the heavy side, but it’s not the sort of reckless, heavy-handed-for-the-sake-of–outdoing-the-next–guy kind of bass you tend to get with more careless designs.

Our only real complaint is that we feel the i60 could be more dynamic. There’s a finesse involved with executing the wide swings between quiet sounds and loud ones that the i60 don’t pull off as well as other $300 to $400 headphones. Then again, those headphones don’t offer half of the features the i60 do.

We watched several movie clips, played a selection of PC games and ran some 5.1 surround test patterns to gauge the i60’s surround sound prowess. For reference, we kept a pair of USB-connected 7.1 headphones (still under review) handy.

Only once have we ever been truly impressed with a headphone surround-sound demonstration. That moment came when we visited DTS’s booth at CES 2013, and we’re still shaking our heads in disbelief. Since the i60 sport the DTS Headphone:X label, we went into this evaluation wondering if it was possible for them to deliver an experience similar to the one we had in DTS’ booth that day. While it may be possible, what we heard during our tests wasn’t on par with what we heard that day, but it wasn’t too shabby, either.

To get the DTS Headphone:X experience, you have to listen to material that was mastered using DTS’ special algorithm. None of the material we used during these tests was and, in fact, very little exists at this time. The sources we did use were a mix of 5.1 and 7.1 sound tracks and stereo audio which the i60 would reproduce using virtual surround processing. What we heard was as convincing as the best surround headsets we’ve tested to date. That is to say, it’s as good as headphone surround has sounded prior to our experience with Headphone:X.

When we step back and think about it, it seems odd that a headset which so successfully and completely folds in Apple’s device capabilities is only now being realized. Then again, that’s what Apple tends to do: develop devices that seem obvious, while executing their function better than you could ever have imagined. Now that we’ve experienced the i60, it seems like the sort of product that Apple users should have had all along. Perhaps that’s what has us finding it so attractive.

Best 70-inch TV Deals: Supersize your screen from $500 today
The best noise-canceling headphones for 2022
Best Amazon Echo Deals: Get an Echo Dot for $25
The best gaming speakers for 2022: Improve the sound on your PC or game console
2022’s best TVs for under $1,000
Amazon saw 15.3 million watch Thursday Night Football on Prime Video
How to watch Pittsburgh Steelers vs. Cleveland Browns on Thursday Night Football
The best wireless earbuds for 2022
Thursday Night Football stream struggles continue for Prime Video
The best Roku TVs of 2022: which should you buy?
The best 4K TVs for under $500: premium picture on a budget
The best speakers for 2022: great hi-fi options for music and more
Nothing teases its next wireless earbuds with photos of a lipstick-like case