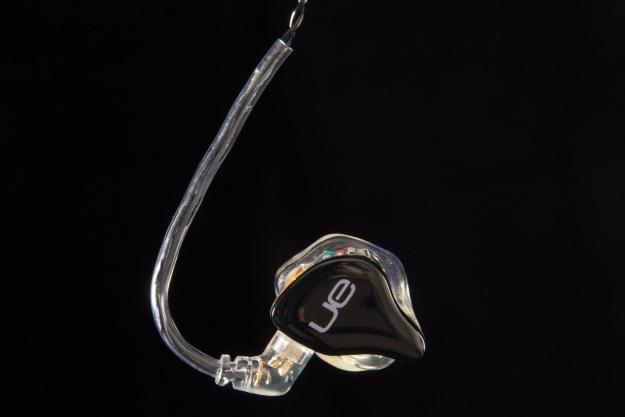 Somewhere in Portland, a man in a non-descript office crams cotton far deeper into my ears than I thought humanly possible, then proceeds to inject cool liquid goo into every remaining crevice, filling my ear canals to the brim. Shouldn’t this guy be wearing a lab coat or something?

The office’s generic art and fake silk plants do nothing to distract me from the fact that the man is now shoving a rubber stopper into my mouth to force my jaw open. I softly pat away streams of drool with a paper towel as I wonder what the hell I signed up for.

This guy should definitely be wearing a lab coat.

Don’t worry: The casually-dressed man isn’t a masochist (not officially, anyway), and this is no scene from some twisted 50 Shades of Grey sequel for sick-minded dental professionals. Actually, the man is an audiologist, and the bizarre, uncomfortable process I volunteered for is the last antiquated step in an otherwise state-of-the-art process of procuring a 3-D printed pair of custom-made professional in-ear monitors, courtesy Ultimate Ears Pro.

One day soon, UE Pro aims to help replace the analog process of in-ear goo injection with a decidedly more modern laser mapping approach. And thank God for that – I spent a week enduring near-deafness before visiting a doctor to have my ears forcefully liberated of compacted wax with nothing more than a glorified water bottle. Otherwise, though, UE Pro has completely revolutionized the custom in-ear genre by porting the entire manufacturing process into the digital realm, using CAD software and 3-D printers to turn that waxy negative impression of my ear hole in to perfectly functioning in-ear monitor.

And when I say perfectly functioning, I’m not kidding. Yes, the fitting process was a pain in the ass. But it was totally worth it.

I had to endure about 3 weeks of impatient anticipation (around half the time it often takes to get custom monitors crafted the old fashioned way) before the clear plastic gems arrived in a brushed-metal case so robust it felt like it could sustain a tour of duty in a foreign land. The first thing I saw after unwrapping the package was a small-print moniker on the top that read “handcrafted for Ryan Waniata.”

The RM’s talents for near-perfect sonic reproduction are abundant.

And though I hate to admit it, there are few times in recent memory that I’ve felt more special.

Popping off a rubberized lid gave a first look at the sparkling molds of heavy plastic within, their black cover plates gleaming through a tangle of heavy-braided cabling that terminates with a 90-degree jack, which is covered in more translucent plastic. Beneath the ‘phones I found the bare accessory essentials: a small extension cable, a gold quarter-inch adapter, and the requisite cleaning tool which, believe me, gets more than its fair share of use.

UE offers a full array of flavors to choose from in its custom collection. Each pair is designed with a specific application in mind, be it stage performance, studio monitoring, or premium “audiophile” listening, though most options will excel in all categories.

All of UE Pro’s designs employ balanced armature drivers, favored for their diminutive size and exceptional accuracy, beginning with single and dual-driver sets, and moving all the way up to the 6-driver flagship model, the $1,400 UE 18.

Naturally I was tempted to go for the gold, however, after some careful comparison, I settled on the 3-driver Reference Monitors (UE RM), which are crafted to recreate a sonic illustration of the music exactly as it was originally laid down for meticulous study of every breath, bow, or pick of a string. To that end, the UE RM provide a claimed frequency response that begins at an astonishing 5Hz in the low end, stretching all the way up to 22kHz up top.

Though you can select from a rainbow of colors, the translucent shells come standard with black plates on the exterior, which is just my style. The UE logo on the left earpiece is opposed by a Capital Studios logo on the right, underscoring the partnership UE struck up with the legendary studio to help create a sound that is “tuned for producers and studio engineers.”

As someone who used to virtually live in the studio, it’s an intriguing idea, and one that I greeted with no small measure of healthy skepticism.

The clear plastic casing surrounding each earpiece gives way to a spider web of premium audio components inside. It was hard at first not to just stare hungrily at the glittering flecks of circuitry like a street urchin peering through a fancy restaurant window in an old movie. Apart from what’s inside, it really is impressive to see just how perfectly the heavy plastic glides along the random curves that outline the inside of my imperfect ear canals, creating the perfect seal and an ideal fit.

And when it comes to quality listening, the importance of a proper fit cannot be understated. This allows the RMs to offer myriad benefits in comfort and noise isolation, the latter of which is rated at a massive -26dB reduction, allowing the outside world to melt away at even modest listening levels. Most importantly, audio performance is highly elevated, allowing virtually zero disruption of the intended sound.

While my molds had to be sent to UE the old fashioned way, audiologists with 3D scanners can transmit them instantly, saving even more time in the new process. Speedier turnaround is a welcome dividend, but the collective benefit of a perfect fit was the driving force behind UE Pro’s move to 3D printing.

The costly transition required the retraining of all of UE’s designers to learn to work in the digital realm. Among other benefits, it allows them more freedom to tinker, without fear of ruining expensive shells. Each piece can now be virtually sculpted just so, before the design is sent to the 3D printing press.

The result of UE’s efforts is a product of premium fabrication from top to bottom, right down to the sturdy elbow joint at the top that guides the cable behind the ear, which is important, considering it’s the easiest way to pop the earpieces in and out. The needle-thin braided cable provides remarkable strength as well, ready to stand up to a demanding workload in the studio, stage, or the world abroad.

It’s no surprise that an earpiece created in your ear’s own image is pretty damned comfy — once you get used to the initial invasiveness of sticking something that deeply into your ear, that is.

Unlike cookie-cutter in-ear monitors, the UE RM lock into place with a quick twist before you even curl back the cable, and from that point, they aren’t going anywhere. I’ve been able to keep the earpieces in for 2-3 hours or more, with only traces of discomfort. In fact, my only real complaint here is the infernal fight against earwax, which can get a little itchy, and also makes it pretty hard to keep that showroom shine on the eartips.

Imagine sitting in nebulous room, completely devoid of sound; that is, until Ryan Adams lets out a tired sigh and ruffles his clothes before whispering “Alright…sittin on my foot is weird.” It’s the intro to the song “In My Time of Need,” and one which few listeners have experienced because it is so often covered by outside noise.

Adams then begins to play a guitar that seems to rest somewhere just beneath your hands, a dusty resonance ringing from the strings as he plucks out the simple melody, soon joined by a loose band of instruments circling around you. The slight reflection of the space draws out the most delicate nuances: You can tell by the forgiving wooden timbre of the guitar and the deadened strings of the banjo that the instruments are a bit old and worn — you hear slight mistakes in the counter melody guitar, like the occasional buzz from a missed fret.

… occasionally, the treble gets edgy, like a katana sword.

That’s just a small taste of what it’s like to re-discover your favorite songs through the UE RM, the most accurate earphones I’ve yet to experience.

The RM’s talents for near-perfect sonic reproduction are abundant, revealed in multiple snapshots over time: The subtlety of a perfectly sculpted slide along the low E string on a stand-up bass; the smooth enameled tone from the high register of a Yamaha grand piano ; the fluid glisten of David Gilmour’s guitar solo from the Pulse version of “Shine On You Crazy Diamond” as his pick cuts at the edge of the strings.

In fact, let’s dig deeper into that last gorgeous production for a moment. There, I was treated to the most realistic saxophone tone I’ve ever encountered on tape. In fact, every instrument in that expert recording is put on display in acoustic technicolor through the RM, especially when driven by the HA-1 Oppo headphone amplifier. I swear, I could almost see the laser light show the first time I cued the tune up.

Of course, not everything comes out smelling like roses through the UE RM. They can be extremely unforgiving to poor quality recordings or low-resolution MP3 tracks, especially in the treble. Before the UE RM, I thought the Westone W40 were just a touch bright on some tunes, such as my crappy 160kbps version of REM’s Eponymous album. But in comparison to the RM, the W40 was downright ruddy on those tracks. Extension into the upper realm is fascinating to follow, as the level of accuracy is pretty astonishing, but occasionally, the treble gets edgy, like a katana sword.

Depending on the song choice, one might be led to think the RM are short on bass … until you hear a properly beefy recording, that is. Bass is thick, vibrant, and powerful when called upon, as did Jay-Z’s “Big Pimpin’.” While the earphones can’t rumble your body like a real sub, the RM deliver the feeling of being transported to a well-balanced studio in such moments, without the hassle of dealing with diffusion, diffraction, and all the other acoustic complications that occur when sound waves bounce around in the real world.

If you’ve never really dug into Peter Gabriel’s solos career, album’s like Up will leave you in sheer awe of the pop star’s production skills when listened to through the UE RM, revealing a collage of textures and colors in sweeping circular movement.

And thanks to the -26dB ambient sound reduction, you can harness these kinds of musical experiences almost anywhere, including flying through the air at 35,000 feet — sans crying babies. In short, the UE RM aren’t just my favorite earphones, they’re my sonic sanctuary.

When it comes to reproducing music exactly as it was intended, there are few sonic devices on earth that can contend with the Ultimate Ear Reference Monitors. If you take music really seriously, there is perhaps not better listening tool around.

The best Apple Watch bands and straps for 2022: The best for all budgets