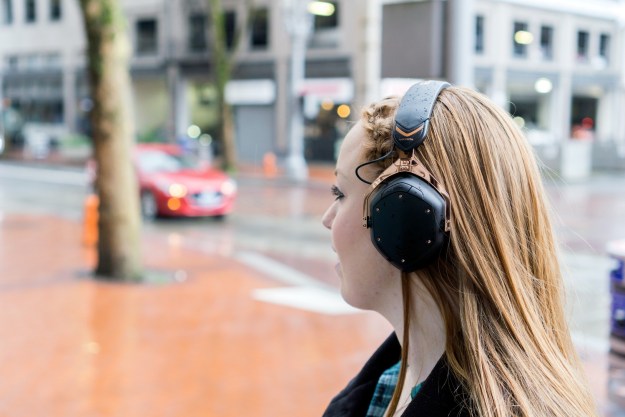 “V-Moda’s Crossfade 2 wireless is an impressive second act that should easily appeal to style-minded bass heads.”

In movie nomenclature, the word “sequel” is often associated with an unabashed grasp for cash as studios look to parlay a successful property into a second payday (or third, or fourth, or fifth). Even in the age of the mega franchise, the prevailing theory is that few — if any — cinematic follow-ups can reach the same heights as the original that inspired them.

In the audio world, it’s a much different scenario. A second take is a chance for a monetary reprise, yes, but also for improvement over the original, shoring up quirks, mistakes, or omissions. When it comes to the Crossfade 2, V-Moda’s follow-up to its popular Crossfade Wireless headphones, the company (for the most part) has done just that. With signature design traits left intact, inside and out, the Crossfade 2 improves on the original with a cleaner sound and some subtle design upgrades that make them well worth another screening.

On the surface, the Crossfade 2 headphones look like an identical twin to their predecessor, which themselves were all but a wireless mirror image of V-Moda’s first hit headphones, the Crossfade M-100. Opening the sleek black and orange box reveals the cans packed inside V-Moda’s signature case of superhero-esque putty armor, complete with the requisite carabiner attached. At the bottom of the box is a 1/4-inch adapter and a V-Moda sticker.

Unzipping the small case outlines the first notable upgrade. Unlike the original Crossfade, the second coming fold in on themselves via dual hinges to fit neatly inside the smaller case. This was a hallmark of the M-100, and something we’re glad to see joining V-Moda’s wireless (ahem) fold. Tucked into the micro bundle is a pair of Kevlar-reinforced braided cables, including one with USB terminals for charging, and one for wired audio with a three-button iOS microphone.

While the folding hinges appear to be the lone aesthetic update, zooming in closer reveals another design change, though you’ll almost have to line up the cans back-to-back to notice. The Crossfade 2 bear thicker heaps of padding along their hexagonal earcups. Made from memory foam, the new pads are designed to add better passive noise isolation.

V-Moda makes the right tweaks to deliver superior sound over the previous model.

Other than that, there’s virtually no notable differences between the two pairs on the surface. The Crossfade 2 bear the same resilient Steelflex headband (designed to be twisted and turned at will), the same steel arms clutching the same robust hexagonal earcups, and even the same input ports and controls as the original Crossfade to a T. “If it ain’t broke,” as they say. The new cans also bring back V-Moda’s original Matte Black color option, along with two new colors in Matte White and Rose Gold.

We’re glad to see so many familiar traits in these well-designed cans, including the controls, which favor tangible plastic keys atop the right earcup over the touch controls so common in today’s wireless headphones. The easy-access keys on the right earcup allow for simple control of volume, play/pause, taking and ending calls, and song skipping. The Crossfade 2 also have the intuitive power/pairing switch we loved on the original. Simply flip it to turn the cans on, and hold it for Bluetooth pairing to your device. Also on the right earcup is a wired audio input and a tiny microphone slot, while the left earcup bears only a micro USB port for charging.

Another familiar V-Moda trait is the earcups’ ported shields along the exterior, which can be swapped out for a rainbow of V-Moda’s 3D printed options, with themes and textures to cater to your style. On the inside, however, the dual-diaphragm 50mm drivers have been redesigned, fitted with an all-new “CCAW” voice coil designed in Japan for “hi-res” performance. In fact, the headphones now bear the Japan Audio Society’s certified Hi-Res Audio insignia (in wired mode only) with an extended frequency range of 5Hz-40kHz. V-Moda faithful can relax, though, as the Crossfade 2 still boast a version of that thrilling bass-forward V-Moda sound signature. If anything, the Crossfade 2 simply refine their predecessor’s sound (more on that below).

A few other alluring features include an impressive wireless connection (we could walk dozens of feet away through walls with no issue), virtually latency-free wireless listening, and auto shutdown after inserting the audio cable. Battery playback time of around 14 hours has also improved slightly. Interestingly, the Rose Gold color we reviewed is the only version to add in the AptX codec for improved streaming resolution over Bluetooth with capable devices (for a $20 premium). That puts them at $350 with AptX and $330 without, which is still a 10 percent price rise over the original Crossfade Wireless.

One update we’re not as excited about is the new earpads, which are designed for better comfort and noise isolation, but feel a bit more obtrusive. While the original Crossfade’s pads squished down to fit more like a hybrid between over- and on-ear headphones, the new pads crowd our ears more, making the hexagonal earpieces pinch a bit during longer listening sessions. We expect the pads to soften over time, but we still prefer the previous design.

As we alluded to above, those who loved the Crossfade’s sound (and the M-100 for that matter) will find many of the same hallowed sonic hallmarks in the Crossfade 2. That includes smooth and authoritative bass, balanced with a clear and detailed upper register for a thrilling, bass-forward sound.

The differences are subtle, but to our ears, V-Moda has made all the right tweaks to deliver a superior experience in the Crossfade 2. The biggest difference is in the bass, which has been tightened over the original for a firmer, more refined response. Make no mistake, there’s still plenty of thunder here, and bass can occasionally run a little hot for our ears. That said, it’s more controlled in the latest design, offering less boom and, therefore, more space for the other frequencies to expand.

Up top, the midrange is clear, though it’s a little less forward and present than in the first iteration. That’s ok, though, as the extra space afforded by the firmer low end allows for as much or more detail and clarity, as well as better definition in the outer stereo depths. Perhaps the biggest difference between the two sounds is the overall depth and dimensionality in the Crossfade 2’s soundstage, which provides more room for the textures of instruments like percussion and brass to shine, and a cleaner overall delivery of the sound.

It’s that slimmed down bass we love best, though, which is even more pronounced when wired into a hi-fi sound source like our Antelope Zodiac amp/DAC. While some listeners may miss a bit of the punch, the cleaner sound allowed our ears to dig into the chocolaty goodness more readily, evidenced in tracks as wide ranging as Billy Joel’s Travelin’ Prayer, where the bass’s chalky amp sound is wonderfully synthesized, to The Weeknd’s Starboy, where the song’s gratuitous low thump hits with grounded authority.

The Crossfade 2 includes a one-year limited warranty for any inherent product issues with valid proof of purchase from a verified retailer.

Improving on the original in sound and design, V-Moda’s new Crossfade 2 is an impressive second act that should easily appeal to anyone who likes their headphone sound with a heavy helping of smooth, musical bass.

V-Moda is famous for its robust headphone designs, and there’s nothing here to indicate a change. We expect the Crossfade 2 to outlast many of its contemporaries when it comes to durability, especially for those who aren’t strangers to the occasional headphone mishap.

What are the alternatives

Thanks to Dr. Dre and his contemporaries there are, of course, teems of bass-forward headphones on the market. But few achieve the thrilling power of the low end many listeners seek without sacrificing clarity and quality up top. V-Moda’s own past collection are obvious options (especially if you’re a bargain hunter), as are high end competitors like Sennheiser’s Urbanite XL wireless, which offer a similar sound, but decidedly different styling. There are also similar options from Beats, like the Studio Wireless 2.0, but for both sound and build quality, we prefer V-Moda.

Yes, if you’re looking for a sturdy, bass-forward pair of wireless cans that don’t short clarity and detail up top, V-Moda’s new Crossfade 2 Wireless are an excellent option.

Topics
BluOS will be updated to 4.0 with a fresh look, new features
The best Bluetooth speakers for 2023: Marshall, Sonos, JBL, and more
NAD’s CS1 adds wireless streaming music to any audio system
Bowers & Wilkins’ wireless earbuds get better battery life and longer range
The best VPN for streaming for 2023
Marshall’s latest Bluetooth speaker has four drivers for 360 sound
Showtime is being merged into Paramount+
Sling is now 50% off — stream live sports without cable
Klipsch follows the success of The Fives with The Sevens and Nines powered speakers
Everything leaving Hulu in February 2023
Peacock does away with free tier for new subscribers
Is there a Sling TV free trial? Here’s what you need to know
What’s new on Apple TV+ this month (February 2023)