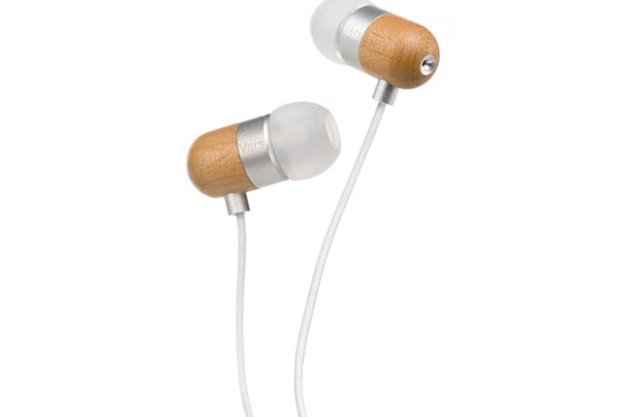 “The Vers 1E sound good as long as you are selective with your musical genre; we don’t like that the bass bottoms out at high volumes in addition to getting muddy.”

Priced at an affordable $49.99, the 1E ear phones are available in three different types of wood: bamboo, walnut and cherry. Due to Vers Audio’s environmental stance, we would put the company as a direct competitor to ThinkSound, another company pushing green design with headphones sculpted from wood.

With a minimalistic approach to design, the Vers 1E feature an off-white headphone cable and come with three pairs of silicon sleeves to ensure a nice snug fit in your ears. The clear silicon sleeves tend to be quite a bit softer than their black silicon cousins; a trait that we prefer as it eliminates a lot of the ear fatigue people tend to experience after prolonged use. Also included in the package is a nice carrying case produced using recycled metal. Instructions are not included in the package, however, so if you are not familiar with how the single clicker remote works on an iPhone, you’ll have to ask a friend or Google.

Our review sample came in the walnut variety, although all of the 1E varieties share the same hardware. A large 10mm driver with a port in the back of the ear phone is designed to give a full bass response. The 1E’s are rated at a 114 dB sensitivity level with a frequency range of 18Hz to 20kHz frequency range. The inline remote control has a built-in microphone and single clicker used to play, pause and mute your music.

Vers claims that the 1E’s are compatible with the Apple iPhone, iPod or “Any device with a 3.5mm headphone jack” which is clearly a claim that anyone should be skeptical about. Another embellishment is the claim that a canalphone can block 90% of outside noise through passive noise cancellation. We have yet to really see this with any earphone out there.

We tested the Vers 1E with the Apple iPhone 4, Motorola Droid X and the Blackberry Bold 9700. Music in our tests included Kanye West Graduation, Lil Wayne Tha Carter II, Zero 7 When it falls. We also broke the Vers E1’s in for 10 hours before testing.

The E1’s have a snug fit when positioned correctly, although the clear silicon tips are almost too soft, and tended to fold when pushed in too much. As for the 90% noise cancelation claim, while they did help block outside noise, you could still hear cars and people while walking and listening to music downtown.

Out of the box, it’s apparent that the E1’s need to be broken in as bass, and mids are very flat; so do not make a decision until you spend some time with them. Even after some breaking in, bass is nice and deep, but bottoms out and becomes muddy at high volumes. Mid-range is not as warm as the ThinkSound ts02mic’s, which we reviewed a while back. (Keep in mind though, that the Thinksounds carry a $20 premium over the E1’s.) Vocals are a tad bit distant depending on the genre of music you are listening to. Acoustics are rich and warm, although the bass during acoustic performances tends to overwhelm a bit.

The in-line microphone and remote are a real issue for the E1’s. In our tests, the inline remote control worked well on our Motorola Droid X (and we would assume any Android-based phone). The clicker was able to play and pause the music in both the Pandora app, and while playing music directly from the phone. The microphone also worked well in our call tests, and you are able to mute the call by clicking on the remote while talking. The same was true for our Blackberry 9700 Bold test, the remote and microphone worked as advertised. The only difference we could tell between the Android and BlackBerry phones and the Apple iPhone 4 is that double clicking the remote would move the song to the next track on the iPhone, but would not on the other two aforementioned phones.

The real problems with the E1’s occurred when testing them with our Apple iPhone 4 (and iOS 4.3+ installed). During our call tests, we experienced a loud repeating chirping noise, and people on the receiving end claimed our call was being broken up. On the music side, sometimes the music would pause when the remote was clicked, other times it would do nothing, and sometimes it would quickly increase, then decrease, the volume. Basically, the remote and microphone were rendered useless on the iPhone 4. We tested this on three iPhone 4’s, each one had iOS version 4.3 or higher installed, so that could be the problem. For good measure, we tried out the E1’s on an Apple iPad (with iOS 4.3.3 installed) and again the remote would not register the click to play or pause 100 percent of the time. Clearly this is an issue Vers is going to need a fix, as this is a deal breaker for Apple users.

At this point in time, we cannot recommend the Vers E1 earphones, as there appears to be a major manufacturing defect with their Apple compatibility. If you own a non-Apple phone or MP3 player, then the E1’s work fine and there is little to complain about. From a pure musical standpoint, they sound good as long as you are selective with your musical genre; we don’t like that the bass bottoms out at high volumes in addition to getting muddy. If using an environmentally friendly product is very important to you, we would recommend that you look at the Thinksound ts02+mic ear phones. They sound better and work with any phone out there.