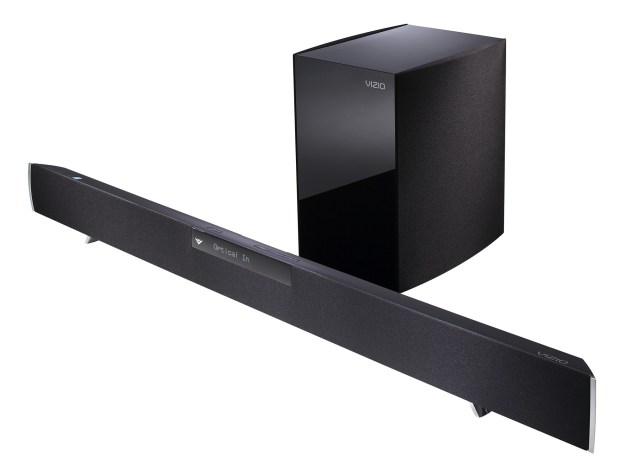 Vizio may clean up this holiday season. It recently announced some ground-breaking holiday deals on a new line-up of TV’s, and today sent out word on some equally provocative sound bar systems.  In total, there are four new model numbers announced with separate prices for each, though what we’re really looking at are two different sound bars, each available with or without a wireless subwoofer.

Here’s how it all breaks down:

At first glance, the two series appear differentiated primarily by design aesthetic. As you can see from the photos, the E-series features a streamlined look, with the sound bar’s cabinet tapered from the top and bottom at its center. The M-series takes on a more angular appearance, maintaining a consistent thickness across the width of the cabinet and adding angular edges on the left and right. Look a bit closer, though, and you’ll note the M-series sports a display window front and center where the E-series has none. Also, control buttons are placed on the top of the M-series while the E-series packs its controls on the right hand side. Both offer similar looking remote controls.

Both sound bars take advantage of SRS TruVolume and SRS TruSurround. TruVolume keeps those violent swings in volume at bay (ever gotten a rude awakening by the slapchop guy?) while TruSurround provides a simulated surround sound experience.

Under the hood of the sound bars are two 2.75-inch full-range drivers. Both models of subwoofer use a 6.5-inch driver. No details on amplifier power are provided. Of course, specs rarely tell the full story anyway, for a more detailed look check out our published review of the SB4021M.

Vizio’s products are available at Costco, Sam’s Club, Walmart, Target, Amazon and, of course Vizio’s website. We wouldn’t be surprised if some or all of those retailers had trouble keeping its shelves stocked with Vizio gear this year, considering these ultra-low price points and Vizio’s reputation for delivering ever-increasing bang-for-your-buck value year over year.

Something tells us this holiday season will see some record TV sales and, since the speakers built into TVs tend to sound exponentially worse the thinner the TV gets, it is likely that sound bar sales will soar right along with them.

Check out our review of the Vizio SB4021M-A1 sound bar and subwoofer.