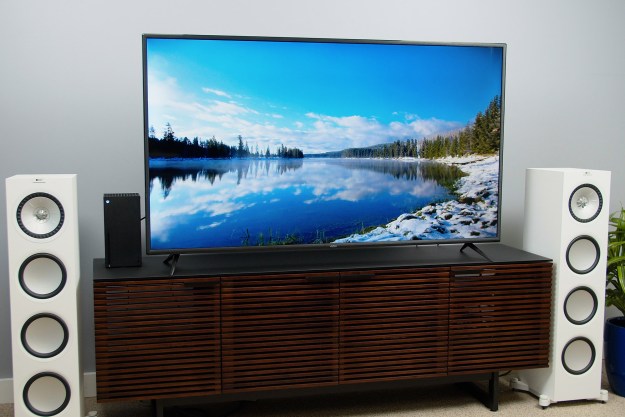 “Vizio's least expensive TV line leaves something to be desired.”

While we reviewed the 65-inch V655-H19 model, our review also applies to the screen sizes available in the series.

As you would expect with a TV at this price range, setup is fairly simple — screwing in the TV’s plastic feet and removing some protective film is all that’s required for a stand-mounted setup.

The TV set itself looks … OK. The V-Series bezels are a bit chunkier than we’re used to seeing, but that not surprising at this basic price range. In fact, “basic” is a word that will come up a lot in this review.

The back of the V-Series has composite video inputs, an antenna input, analog and optical audio outputs, and an Ethernet port. On the digital side (and also facing the side of the set) are three HDMI inputs and a USB input. Keep in mind that those HDMI ports are 2.0b and will not support most HDMI 2.1 features. Initially, we didn’t think this TV supported eARC because there was nothing mentioned in the spec sheet, but it turns out one HDMI port does support eARC (more on that later) and is clearly labeled as such.

The process of setting up the V-Series takes a while — around 10 minutes. Thankfully, it’s mostly automated, so you can wander off to get more coffee and just let the TV do its thing. After that, you’ll have to agree to some terms and conditions that have to do with informing the sponsored content you will see at the top of the SmartCast home screen, which is where you will land at the end of the setup.

The V-Series ships with the picture mode on Vivid, which we moved to Calibrated since that gives us the most accurate picture to start out with. In the Calibrated picture preset, the backlight setting is already maxed out at 100, but most of the other options are set around 50 and can be adjusted to taste. The TV does have full-array local dimming, but it’s a pretty limited system with only 12 zones, so certainly not very advanced. In Advanced Picture Settings, the Backlight Control is switched on, which shows that local dimming control is on by default.

The only control available for motion smoothing is Film Mode — there is no other motion menu we could find. Granted, the V-Series is a basic TV, but it would be nice to have at least some control over motion settings. It’s possible that when a different picture mode like Sports is selected, the motion smoothing automatically adjusts for that content, but the lack of any other controls left us wanting.

As we mentioned, there is no external label for eARC support on the back of the TV. However, we discovered that there is an option to turn eARC on or off under the Audio menu. We would suggest an inexpensive soundbar for the V-Series as its built-in audio isn’t very good.

It’s also worth noting that the V-Series ships with DTS: Virtual X surround sound turned on, which we disabled since it seemed to add a washed-out quality to the sound.

After running several test patterns and switching between standard dynamic range (SDR) and high dynamic range (HDR), there didn’t appear to be much of a difference between the two formats. The V-Series does come with support for Dolby Vision, HDR10, and HLG, but the set just isn’t bright enough to have that make a difference in the picture quality — according to Vizio, the screen maxes out at 400 nits.

As far as overall picture quality goes, it’s not particularly special. Bright highlights tend to be a bit washed out, and color also appeared to be a little aggressive. That’s forgivable for a budget option and, once again, the word “basic” applies. But if you’re looking for a standout picture experience, stepping up to the Vizio M-Series would be a better choice at around $220 more for the 65-inch model and a more modest upgrade of about $90 for the 55-inch model.

We should also note the screen had some vignetting in the corners and odd bright spots down the sides. Maybe that’s a “screen lottery” thing, maybe that’s a quality control thing, or perhaps it’s a damage in transit issue. If we had purchased this TV, we would certainly look for an exchange if we decided to keep it.

Vizio advertises the V-Series as having a pro gaming engine, but it looks like the only real options are Game Low Latency (which switches the TV to its lowest input lag settings) and Game HDR. And while it did automatically recognize our Xbox Series X, it switched the picture mode to Bright instead of Game, which we had to manually select. You can also toggle the Backlight Control (the full-array dimming feature) as well, presumably to help reduce lag.

But as far as gaming features go, that’s about it. Even with HDR gaming, the V-Series isn’t quite bright enough to have HDR gaming appear to make any discernible difference.

When it comes down to it, the V-Series is designed to be used right out of the box by people who simply want to have a big screen and don’t care about the specifics. The perfect use case would be putting it in the garage or man cave or game room — somewhere that you just want a big screen for occasional movies or games, and something you don’t have to fuss with or gawk over. If what you want is a lot of screen real estate for a low price — and that’s about it — then the V-Series is worth checking out.

Yes, the Vizio M-Series would be a better buy for picture quality; however, the V-Series does manage to edge out the comparably priced TCL 4-Series.

With Vizio’s latest SmartCast system and record of long-term performance in TVs, the V-Series should last several years.

Vizio provides a one-year warranty on its TV products. More information can be found on Vizio’s warranty page.

Outside of those looking for the most screen for the least money, no. Again, we would suggest looking at the much better-performing Vizio M-Series.