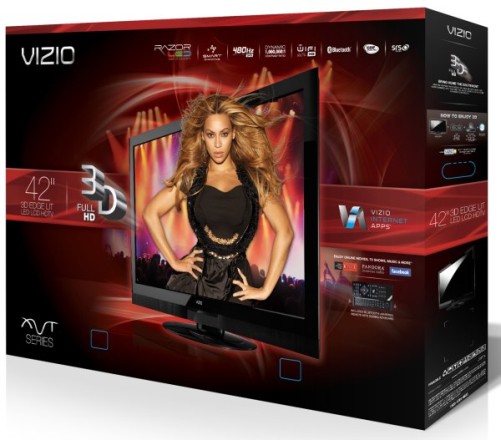 Vizio is taking its acclaimed XVT HDTV series into the third dimension. The company has announced its latest lineup of 42-, 47- and 55-inch HDTVs are now for sale online and appearing in retail stores later this month. The sets boast an impressive array of both old and new features, but the big improvement this time around is the addition of 3D support (3D active shutter glasses sold separately) and a superior 480HZ refresh rate.

Vizio also announced the release of a pair of 3D compatible Blu-ray players to compliment its 3D HDTV offerings. The Blu-ray players promise to deliver “breathtaking” 2D and 3D video as well as Wi-Fi support to enable streaming through online sites like Netflix and Vudu. The players are priced at $189.99.  Not to leave consumers without a complete package, Vizio has also announced a new Wi-Fi router ($99.99) as well as some fancy HDMI cables ($59.99) to see you on your merry way to 3D HDTV land. Don’t forget those 3D shutter glasses!