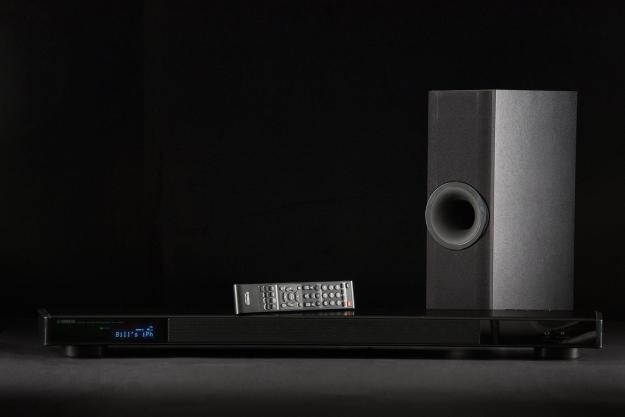 “Yamaha’s YSP-2500 throws a powerful burst of surround sound imagery that pulls you in, and doesn’t let go”

Don’t call it a sound bar. As the latest of Yamaha’s “Sound Projectors,” the YSP-2500 aims to distinguish itself as something different: a home theater device designed for realistic mimicry of a full-blown, multi-speaker surround sound system. While most sound bars rely solely on digital signal processing for virtual surround effects, Yamaha’s sound projectors employ an array of small drivers the company calls “beams,” which bounce sound off the walls to create a bigger, more immersive audio environment.

At $1,000, the YSP-2500 is definitely an investment, but it backs its audacious cost with a legion of 16 beam drivers and a powerful subwoofer, along with just about every other available sound bar feature under the sun. And while we’ve heard its sound projection at work before, Yamaha’s latest iteration is proof the tech is more than just hype, pairing detailed nuance with a massive soundstage in a slim, hassle free design.

At first glance, the YSP-2500 seems to boast the same glossy layer of black plastic we’ve encountered with the company’s mid-tier offerings, like the YSP-1400. However, as we pulled it from its package we were greeted by a sleek layer of brushed aluminum along the top panel that conveys a much more premium air.

Detailed nuance with a massive soundstage in a slim, hassle free design.

The bar is uncommonly slim, even for the genre, thanks to a frame that barely extends beyond the edges of its tiny beam drivers, which glare from behind their grill like thin slits of insect eyes. The wireless sub is also slim, yet sturdy, with a sexy port carved into the front face. At the back of the sound bar is a litany of connection ports which sit, beneath a slender white bar which serves as an IR repeater for your TV’s remote.

Inside the box users will find a healthy selection of accessories including a basic setup guide and CD-ROM manual, an Optical cable, a full-sized remote control wand, a microphone for virtual surround sound setup, a mounting guide and screws, pads, and cardboard pieces to construct a makeshift stand for said microphone.

As slim and inconspicuous as Yamaha’s YSP-2500 is, it’s designed to get even slimmer. Its feet can be removed to allow the bar to disappear beneath your TV screen, or raised to lift it over your TV’s extending stand.

The YSP-2500’s 16 drivers, each of which is 1.125-inches in diameter, are individually powered, pulling a meager 2 watts each from the sound bar’s allocated 32 watts. The rest of the system’s claimed 162 watts of power are all directed at the wireless sub, which houses dual 4-inch woofers working in tandem to provide the low stuff. System frequency response is rated at 40Hz-22kHz.

The sound bar’s connection options include three HDMI inputs and an ARC HDMI output, dual optical digital inputs, a coaxial digital input, an RCA analog input, and even a subwoofer output. At the front is an input for the setup microphone and a virtual surround sound headphone output. Bluetooth with aptX for near CD-quality streaming (and access to Yamaha’s controller app) complete the feature set.

Atop the bar is a slim control panel for power, input selection, and volume control, but that barely begins the bevy of features aboard the good ship YSP-2500. A small digital display at the left front of the bar monitors settings while watching TV, but users going deeper into the system will want to use the onscreen menu, which pops up when tuned to any of its HDMI inputs.

The remote houses a multitude of familiar controls like input selection, volume and subwoofer level, and DSP effects like movie and music, each of which offer a handful of sub-settings. The options key calls up bass and treble adjustment as well as audio delay, which helps keep sound in sync with the action on-screen.

The YSP-2500 is proof that Yamaha’s surround sound tech is more than just hype.

However, buttons like ‘Target’ and ‘Beam’ are more foreign. The former allows users to adjust each “beam” driver to their liking, while the latter allows for more complex virtual surround sound adjustment, including options like 5 Beam, designed for a single listener at the optimal surround sound listening position, or 3 Beam, which better disperses the sound for multiple listeners. Under the setup key, users will find even more options, allowing for adjusting of each of the 7.1 available virtual surround channels, among other settings.

Other on-board features include DTS-HD and Dolby True HD, 4K passthrough at a max 60fps, and Dynamic Range Control, which compresses the audio to help prevent sudden spikes in volume and raise ultra quiet moments. There are a handful of other little features, but the real fun begins when you fire up the included microphone to calibrate the virtual surround sound for your environment.

HDMI connection is the best way to get full functionality from the YSP-2500. You’ll get optimal sound by connecting devices like Blu-ray players into the unit’s HDMI inputs directly, and then routing them to the TV via the HDMI ARC output. Those with ARC-enabled TVs can control basic sound bar functions using their TV remote. However, unlike many ARC configurations, you’ll have to connect a separate Optical cable for TV audio. Not a big deal, but it is one extra step. You’ll also need to engage HDMI control from the Setup menu.

Employing the Intellibeam mic is necessary to optimize the unit’s sound for your room (and it’s kind of fun too). To do so, simply set up the makeshift stand and microphone in the room’s centralized listening position, plug in the mic, and follow the onscreen instructions. Once you press return, there’s a 10 second countdown to exit the room, followed by 3 minutes of digital audio trickery that get’s the system locked and loaded.

From the very first scene we experienced with Star Trek: Into Darkness, we were convinced Yamaha’s sound projection system is one of the few viable replacements for a true surround sound system — especially in its more advanced form. While the YSP-1400 certainly offered a large soundstage, the 2500 was immediately more detailed and immersive, seeming to project a distinctly perceivable sphere of sound that drew us deeper into the interstellar adventure.

The seminal subway crash in Skyfall was handled with brutal bravado.

A particularly poignant scene came during the attack on the archives in London. Clean, lucid clicks buzzed from the catalyst ring as it clattered in the glass, moving quickly to the explosion which rang out musically in the low end, and swept from the center of the image, crashing into the side walls of the sound stage. Most impressive (and unsettling) were the screams of the victims that seemed to pop up all across the front of the room, and in clearly defined locations. We never quite got the effect of sound coming from behind us, however, this was most likely because our TV cabinet placed the bar in a position such that the sound it projected couldn’t bounce off the back wall effectively — a definite drawback of Sound Projector’s approach.

As we moved on to another favorite for evaluation purposes, Prometheus, the system impressed on an entirely different level. While the virtual surround was again on display, it acted more as scaffolding for the film’s complex layers of sound. David’s movements through the ship as the others slept were brilliantly detailed, marked by swishing doors and digital alerts, along with a myriad of little sonic nuances as he invades Dr. Holloway’s dreams. The gritty vocal textures from the hologram version of Peter Weyland were almost gripping, and we even heard aliasing in his voice as the hologram wavered – an effect that, previously, had gone unnoticed.

The system was just a tad light in the midrange at times, but in most cases we were surprised at how well the sub and sound bar worked in tandem, covering the full sonic spectrum with good balance. The sub also helped flesh out gunshots in action flicks with potent resonance, echoing into the sides of the soundstage. And the seminal subway crash in Skyfall was handled with the appropriate explosion of brutal bravado.

Music playback was less impressive. My Surround (which essentially deactivates virtual surround) pulled out the best performance, but overall the sound lacked nuance and presence in the midrange, and the treble leaned toward the sharp side. Still, that wasn’t entirely unexpected. This Sound Projector is built to deliver cinematic sound effects, and isn’t really geared toward producing music in a natural way.

Our only other real complaint (apart from the hefty price tag) is that the bar only performs to its full potential in an optimal environmental setting, and when heard from an optimal listening position. Sure, you can direct the beams to expand for larger audiences, and for larger rooms, but the YSP-2500 is at its best when it has obstacle-free, right-angled walls on its left and right off of which to bounce sound.

Edging towards the price point of diminishing returns in the sound bar genre, Yamaha’s YSP-2500 may not be cheap, but it offers a powerful burst of audio imagery that pulls you into the action and refuses to let go. While music isn’t its forte, Yamaha’s YSP-2500 strives to be the Oculus Rift of audio — and gets close enough to impress.