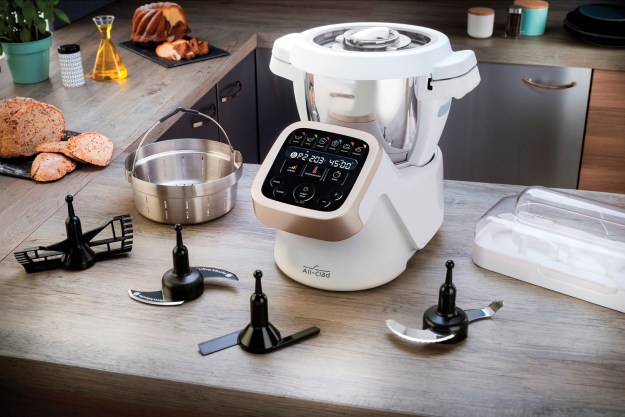 “With cooking programs and hundreds of recipes, the All-Clad can replace a bunch of appliances; just be prepared for sticker shock.”

It’s hard to know how to describe the All-Clad Prep & Cook. Is it a food processor? Steamer? Rice cooker? Yes, yes, and yes. Its closest counterpart is the Thermomix, which performs a similar array of functions. Unlike the famous Instant Pot, it’s not a pressure cooker. All-Clad calls it an all-in-one appliance that cooks, chops, crushes, kneads, stirs, mixes, whips, and more. From steaming to slow cooking to ice cream making, we put the All-Clad Prep & Cook through the paces for our review.

What is this again?

The All-Clad Prep & Cook somehow manages to look both professional and a bit dated. It features stainless steel, plastic, and a digital display. The colorful buttons remind us a bit of a toy appliance. With a 12.25-by-12.25-inch base, the Prep & Cook is a sturdy, 19-pound machine. It’s also more than 14 inches tall. In addition to taking up all that countertop space, it comes with a plastic case full of attachments, much like many food processors (a blade for chopping, two for whipping and mixing, and one for kneading), as well as a steamer basket.

The food processor comparison is an apt one, because we found ourselves constantly describing it as such, but adding that “it also cooks.” Its blades and attachments make it a bit different from the many multicookers on the market; though they’ll sauté, make rice, and slow cook, they won’t chop, crush, or whip. The Thermomix is relatively new to the United States market but has been around for decades in countries such as Italy, Spain, and Australia. The idea of an appliance that can first chop and then sauté your vegetables is a bit different here, where plenty of kitchens have room for a blender, mixer, and slow cooker. The beauty of an all-in-one is that it combines a bunch of appliances into one, so you theoretically have fewer dishes to do and don’t need to turn on the stove for every meal.

Unlike the famous Instant Pot, it’s not a pressure cooker.

The All-Clad has a 4.7-quart stainless steel, dishwasher-safe bowl. You can also clean the attachments in the dishwasher. The lid locks into place before you can start stirring or chopping, but there’s a small removable piece of plastic in the lid, too, that vents steam or gives you access to add liquid or other ingredients as you’re cooking. Six program buttons (sauce, soup, simmer, steam, pastry, and dessert) on the display offer preset stirring speed, temperature, and time, but you can manually adjust any of these as well. The All-Clad heats up between 90 and 270 degrees Fahrenheit in five-degree increments. The timer is can be adjusted in five-second intervals, and there are 12 stirring speeds available.

Let’s say you want to make some soup. You know you turn your stove on medium-high or high, but you might not know what that translates to when it comes to degrees. The All-Clad programs help a lot here. Many have multiple settings, and you can hit different buttons to toggle between them. Hitting the P1 soup program sets the temperature to 210 degrees Fahrenheit for 45 minutes. P2 has the same settings, but instead of also chopping the ingredients for two minutes for a smooth consistency, it only pulses 10 times for a chunkier mélange. For the cream of artichoke soup recipe in the included book (which includes more than 300 things you can make in the All-Clad), there are five minutes of prep and 40 minutes where you can go watch Jeopardy! or something. You’ll still need to cut an onion into more manageable pieces, for example, but the program has the chopping and simmering baked in, so you don’t need to babysit and prompt it to the next step. You’ll still need to add whipping cream when the 40 minutes are up and manually set the mix and time to 12 and 30 seconds, respectively.

In perhaps the All-Clad’s biggest departure from the Thermomix, the latter has a bigger display and fewer buttons. There are some presets, like for rice, but you’ll follow Thermomix-specific recipes that are broken down step by step. The Thermomix has an integrated scale, so you’ll add eight ounces of onion and hit the “next” button, and the time and speed will all be set for you. When it’s done, you’ll hit the next button, add a tablespoon of butter, and all the parameters for sautéing the onions will be automatically keyed in on the next screen. The Thermomix pulls this information from a digital cookbook, and new machines come with a at home, an hour of prep time means we’ll probably only attempt this recipe for a special occasion.

The All-Clad can do a lot, but it can’t do it all. It has recipes for pizza, burgers, and beef bourguignon, but you’ll still need an oven, grill, and/or skillet to make them. There were some recipes — like those for sauces, soups or stews, and steamed items — that made the Prep & Cook’s value clear. But there were a few things we were perplexed by. It’s supposedly a slow-cooker, but the time only goes up to two hours and there’s no specific program for this function. Because you manually dial in the temperature, there’s no equivalent of slow-cooker low or high settings. The settings indicate the time it takes for a Crock-Pot to reach 209 degrees Fahrenheit, according to the company — seven or eight for low and three to four for high. To make slow-cooker shredded chicken, we put the All-Clad at 190 degrees for about 3.5 hours; it was cooked through but ended up pretty dry. This didn’t seem like the best use for the Prep & Cook.

The All-Clad Prep & Cook comes with a two-year guarantee.

If your menus are soup and stew heavy, the All-Clad Prep & Cook could be in regular rotation at your house. It combines lots of useful appliances in one, but its $1,000 price tag should make you think twice before you consider tossing your existing machines for an all-in-one.

The Thermomix is really the only competition. It’s about $300 more, but it does have more recipes and works as a scale as well. While the Thermomix only goes up 250 degrees Fahrenheit, you can increase or decrease the temperature in 1-degree increments. Something like the T-Fal 10-in-1 or KitchenAid Multi-Cooker lack the food processor functions of the Prep & Cook or Thermomix because they don’t have blades.

The machine is sturdy and well-made. All-Clad has been around since the 1960s; while it’s perhaps best known for its cookware, it makes a variety of slow-cookers, toasters, and other small appliances.

For those with smallish kitchens (but sill a decent amount of counter space), the Prep & Cook does a nice job of preparing everything you’d throw at a blender, mixer, or food processor. There are a lot of main course options that are quick prep, but it’s important to note that you may still need your oven or stovetop for a fair number of them. We still prefer the Thermomix, simply because it is a bit more precise in terms of time, temperature, and weighing ability.