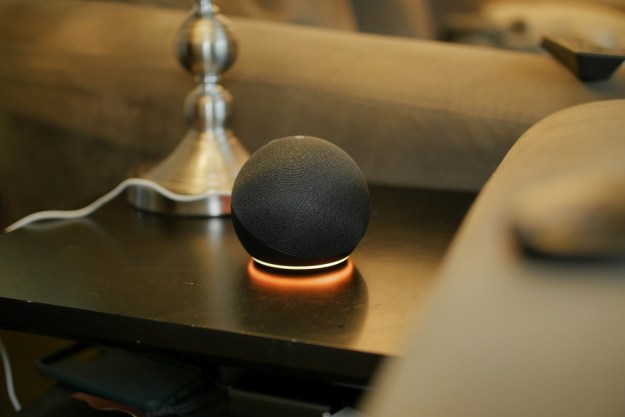 Ditching the puck-shaped design of its predecessors, the fourth-generation Echo Dot is looking to make a statement with its revamped design. You could say it’s a gamble because the spherical shape of the new design is a stark departure from everything else out there. But the bigger issue is where this latest model stands against the myriad of other smart speakers seeking attention.

Despite being the entry-level model, Amazon has never neglected the Echo Dot’s audio punch — and that’s apparent again with the fourth-generation Echo Dot. For its size, it’s actually quite impressive in how good it sounds. Sure, it’s in no way meant to rival the premium audio experiences of something like the Echo Studio, but for its size, I’m convinced it’s the best-sounding speaker in the $50 price range.

Underneath the 100% post-consumer recycled mesh fabric that wraps around the entirety of the speaker, there’s a 1.6-inch front-firing speaker that delivers crisp highs, balanced by full-sounding bass. If you’re a casual music listener, you’ll appreciate how the Echo Dot (4th Gen) is able to fill smaller spaces very well with its audio. You can certainly improve its output by pairing it with other speakers to achieve that room-filling sound, but it’s still able to stand on its own.

I’m convinced it’s the best-sounding speaker in the $50 price range.

It handles higher volumes well without ever coming off screechy or shrill in tone. There’s also a bit of elbow room when it comes to tweaking its audio, since there are controls through the Alexa app to adjust its bass, midrange, and treble. Don’t let its small size fool you — the Echo Dot can give some larger speakers competition with its performance.

A design for everyone

Just like its bigger sibling, the Echo (4th Gen), the Echo Dot (4th Gen) sports a spherical shape. Its height has increased over the third-generation Echo Dot, while physical buttons for volume, mute, and action all continue to line the top.

I was skeptical about this decision, especially when the puck-shaped design has become an iconic look. Yet, change can be a good thing — and that’s the case with the new Echo Dot (4th Gen). Whether it’s on my office desk, or on a kitchen shelf, the design complements just about any style and decor.

Amazon also announced the variants of the speaker during its September 2020 event:

If you need a bedside companion, the Amazon Echo Dot (4th Gen) with clock is the logical choice. It displays the time — along with the temperature outside, timers, and alarms. I honestly wish that the LED clock were a standard feature with the Echo Dot, as opposed to being an entirely separate model.

Beyond the clock functions, there’s nothing different about it versus the standard model. There’s a $10 premium on this version, though, which places it at $60. It’s worth the purchase because I can’t tell you how convenient it is just being able to know the time without having to turn to my smartphone.

More and more people are relying on smart speakers as they work from home, but those who have children will want to consider the fun and cute Amazon Echo Dot (4th Gen) Kids Edition.

At the moment, there are two design options available — a panda or tiger. The Kids Edition has all the same features as the standard Echo Dot, but Amazon throws in a bunch of kid-friendly content that includes a year of Amazon Kids+. Kids can ask Alexa to tell them stories, call approved friends, and use some educational skills. Just like the clock, the Kids Edition is $60.

Alexa to the rescue

Alexa, the digital assistant, continues to grow and evolve. While Alexa has gotten better at delivering relevant answers and responses to questions/commands, I still find that Google Assistant still does a better job. Despite that, there are still far more Alexa-compatible devices to command and control — ranging from everyday things like smart LED light bulbs, to some obscure gadgets such as garage openers.

It’s small things, like Alexa Guard, that adds more of an incentive value.

Alexa’s wealth of functions continues to grow as well thanks to the different Alexa Skills you can purchase. I really love that you can change Alexa’s voice to Samuel L. Jackson, especially when it comes to the explicit and witty commentary.

There’s one particular area that has gotten my attention more than anything else — security features that enable Alexa to watch over my apartment. With Alexa Guard, the Echo Dot (4th Gen) will listen for specific sounds, such as glass breaking or a smoke alarm going off. Google Assistant offers a similar feature, but you have to subscribe to its Nest Aware service. It’s a free service for Alexa Guard, so I appreciate that it’s thrown in without any additional cost. Wishing for a more complete service? Amazon Guard Plus will be launching soon at $5 per month, adding an emergency helpline where you can request for help by asking Alexa.

Most people expect smart speakers to do the typical things, like playing music and controlling other smart home gadgets, but it’s small things, like Alexa Guard, that add more of an incentive for the Echo Dot (4th Gen) being in the home.

The Amazon Echo Dot (4th Gen) makes some bold changes, but it delivers a resounding package that makes it the smart speaker to beat at the $50 price range. Its spherical design is a refreshing change that doesn’t keep it from being a capable speaker for music. The only gripe I have is that the LED clock should be default on all models, rather than having a dedicated model.

Since it’s unlikely to be moved around from place to place, there’s zero to very little worry about something unfortunate happening to the Amazon Echo Dot (4th Gen). Its construction is solid, but if anything does go bad internally, there’s a 1-year limited warranty that covers defects. If you require more, Amazon provides accident protection for a cost.

The Google Nest Mini is the logical choice if your budget remains at around the $50 range and you rely heavily on Google’s services.

Even if you have the previous version, the Amazon Echo Dot (4th Gen) makes for a great purchase regardless if you’re just getting started or plan to make an addition.

Celebrate Fourth of July with these patriotic Alexa skills
Amazon might be using Alexa to send you targeted ads
How to mount an Amazon Echo Show 15
Google Home (Nest Audio) vs. Amazon Echo
Zendure’s SuperBase V power station is industry-first with Semi-Solid State Tech
Grab this Roomba alternative while it’s ridiculously cheap today
The history of the Amazon Echo
What we want to see from Google’s fall event
Smart speakers vs. smart displays: Which is right for you?
Hate cleaning? The DreameBot L10s Ultra operates hands-free for up to 60 days
The Eufy Edge Security System offers better recognition chops and solar-powered cameras
Best standing desk deals for October 2022
I replaced my fancy coffee machine with a smart tea kettle, and I love it