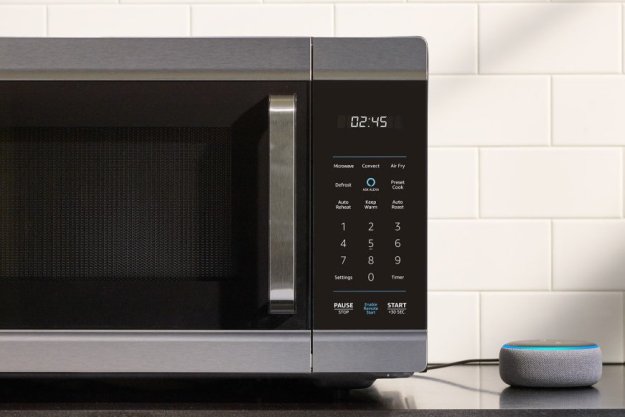 “It's a microwave, convection oven, reheater, and air fryer, but it doesn't do anything well.”

The Amazon Smart Oven is the size of a medium-sized microwave, but it’s actually a four-in-one machine that works as a microwave, air fryer, convection oven, and food warmer. For $250 you get all that plus a third-gen Echo Dot, so you can use voice commands to start, pause, and stop cooking.

It seems like a killer deal — but don’t get too excited. We’ve found some flaws with this smart oven Amazon has cooked up.

The Amazon Smart oven is billed as a device you can use voice commands to control. I was excited there was an oven I could talk to until I realized that you don’t really talk to it. You have to link it to an Alexa device, like the Echo Dot, then talk to the Alexa device, which controls the oven.

The Smart Oven is Certified for Humans, which means it’s supposed to be easy to use. That made me feel stupid, because I found the oven difficult to use.

With so many functions packed into one appliance, cooking comes with a learning curve. Most microwaves and ovens are easy to use without ever glancing at a manual; I had to re-read the manual several times to properly understand this multi-cooker.

Of course, if you solely use Alexa to run the oven, you don’t need to remember how to cook something using the various modes. In theory.

In reality, Alexa won’t always understand what you want. For example, I asked Alexa to cook a pizza, and Alexa asked how many I wanted to cook. I said, “One.” Alexa responded, “You can cook 5 to 15 pizza.” Then, she ended the task without starting the oven. After a lot of frustration, Alexa finally turned the oven on, but it took a few minutes.

You’d think the Alexa button in the middle of the keypad would solve some problems, but it doesn’t. The Ask Alexa button basically tells your linked Alexa device to listen so you don’t need to say, “Alexa.” I’m not sure how that’s useful, to be honest.

I also couldn’t find any information on how to use the temperature probe in the manual. Where do you plug it in? Does it go in your phone jack? Do you leave the probe in the food while it cooks? I’m still not sure.

With the first use, the smell of burning plastic filled my house. I checked to make sure I removed all of the plastic and couldn’t find the source of the smell. Thank goodness that only happened once.

I’m not unfamiliar with the “burn in” period some ovens can require. Ovens often need burn in, which removes leftover chemicals and manufacturing products. The smart oven smelled worse than most, which surprised me considering its small size.

The manual didn’t provide any information about burn-in requirements, so I’m not sure if this happens with every unit. I just know my eyes burned for hours.

I reached out to Amazon about the problem. A company spokesperson said “the issue may be present during first use, as with other heating-based appliances.” Amazon is right that some burn-in smell is to be expected, but the Smart Oven was particularly unpleasant.

Features galore, but not done well

The Amazon Smart Oven has a lot of features crammed into a small device, but none of them work well.

If you’re buying it for the air fryer, you should stick to one of our picks for stand alone air fryers, like the Ninja Digital Air Fry Oven. The Smart Oven has very few presets and the results aren’t delicious.

It takes longer than a dedicated air fryer to cook and doesn’t taste any better than foods baked in a conventional oven. My tater tots looked great, but when I took my first bite, I was greeted by a weird texture somewhere between crispy and chewy.

When using it as a convection oven, you have to put your food item on a tall rack, making a small space even smaller. This oven is barely big enough to cook a personal-sized pizza, so I’m not sure how useful it would be for anyone that wants to use it to cook a dish for more than one person. It’s larger than its multi-function competitor, the Toshiba Microwave Oven with Convection Function Smart Sensor, so I’ll give it that.

One of the more exciting features is that you can scan food barcodes using the app. After scanning a product, the oven will know how to cook the food, and for how long.

Right now, though, this feature isn’t compatible with most brands. Amazon assures me that the list is expanding.

The Tovala Smart Oven can recognize more than 650 food items, so if it’s scanning you want, you may want to go with Tovala. Even that’s a slim list, however, when you consider the tens of thousands of items in a typical grocery store.

Scan-and-cook sounds intuitive, but it’s not ready for most foods yet.

The Amazon Smart Oven is poor execution of a good idea. It’s small, complicated, and not user friendly.

If you want a machine that has 4-in-1 capabilities, uses Alexa commands and can scan food packages, then no. There isn’t another machine on the market that has all that.

You’d be better off getting a great microwave, air fryer, and convection oven separately. If your choice is between this 4-in-1 oven or a standard microwave, you’re better off with the microwave.

Though the outside of the machine seems sturdy, the wobbliness of the turntable concerned me. It does come with a 1-year limited warranty with service included. Amazon also offers optional 1-year, 2-year, and 3-year extended warranties for U.S. customers, but they’re sold separately.

No. All of the functions that seemed cool at first came up to a big “eh” after trying them. This is a surprising miss from a company that usually builds awesome home tech.