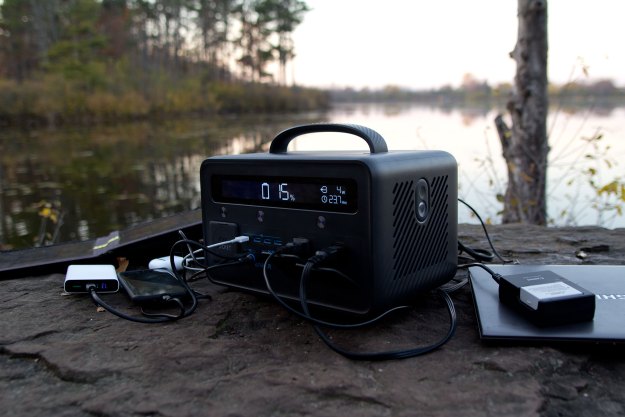 Anker is well-established in the field of backup phone batteries, and I’ve enjoyed some of its models for years. However, after a few camping trips laden with a dozen portable packs to keep my (and my friends’) phones well-charged, I was eager to streamline things with a chunky power station like the Anker PowerHouse II 800.

This 777 watt-hour battery has enough plugs to keep a slew of gadgets charging concurrently. Two AC plugs are available to handle your bigger devices, while four USB-A ports and two 60-watt USB-C ports can take care of your phones and tablets. There’s a DC car socket as well, which you might end up using for an air mattress pump.

As for charging inputs, the PowerHouse II 800 supports solar panels producing up to 120W. It also benefits from maximum power point tracking, which dynamically optimizes the battery to make the most of variable incoming power from solar panels. I was able to get an old Goal Zero Nomad 13 solar panel plugged into the DC slot and charging just fine, but after sitting on my balcony for two-and-a-half sunny days, the PowerHouse barely clocked 3%. You’ll likely need some big solar panels to charge this bad boy in reasonable time.

You can always juice up the PowerHouse II 800 the old-fashioned way with the wall socket. If you want to eke a bit more power into it, you can also plug the included USB-C cables into the wall at the same time.

The PowerHouse II 800 is positioned as a rough-and-tumble product thanks to its reinforced corners. We’re dealing with electronics, so generally speaking, you don’t want to be out standing in the rain with your phone while it charges, but as far as water protection goes, the AC plugs and DC car plug are covered well. The only complaint is that the joints aren’t well-positioned for plugs that angle down at 90 degrees toward the grounding wire. Anchoring those silicone flaps above the plug instead would have prevented extra wear.

The top-mounted handle is sturdy, rigid, and has great grip. For something that weighs 18 pounds, it’s much needed. However, the handle does break up the profile of the box, making it challenging to pack. So if you’re putting anything on top of it during your road trip or in your closet during the off-season, you’re adding stress to that handle and generally making storage awkward. You’re also losing out on prime real estate for your devices. Many other power stations in this category have their handles built into the corners of the case itself to avoid issues like this.

The front LCD display gives you all the relevant information you need, including total charge, estimated remaining output life, time to input a full charge, current frequency and power, and temperature warnings. Below that are three hardware buttons that let you activate each of the major sections independently. Sadly, there’s no companion app to monitor these things.

It’s probably wrong to see the PowerHouse II 800 as a proper home backup solution. It’s explicitly rated not to support devices over 500W, like microwaves, toasters, or hair dryers. The most aggressive test I put this battery through was having my desktop PC and plasma TV plugged in to watch some YouTube videos.

The PowerHouse II 800 seems to be for weekend camping getaways with multiple people who need their phones topped up.

The draw bounced between 460W and 500W, which bought me a little over an hour of charge. My dreams of rugged off-grid individualism dashed, I went for a more modest test the next day. This time I just had my laptop and external monitor plugged in, and they fared perfectly well for the full day. Anker estimates that you can get 55 phone charges, 19 tablet charges, or 10 laptop charges out of a fully charged PowerHouse II 800.

The 60W maximum output on the USB-C plugs isn’t as high as it could be. Many power stations have stronger USB output that are capable of keeping more powerful laptops running. As it stands, you’ll have to make do with one of the standard AC slots. You’ll also see more and more power stations with wireless charging on top for added convenience. For what it’s worth, Anker does employ its PowerIQ 3.0 charging technology via USB-C that is compatible with Apple, Samsung, and Qualcomm quick-charging standards.

The perfect use case for the PowerHouse II 800 seems to be weekend camping getaways with multiple people who need their phones topped up. If anything really hammers the outdoorsy use case home, it’s not one, but two built-in LED lights. One little guy can provide a focused beam, while the broad rear one has a nice diffuse light that would perfectly fill a tent. The small light includes an SOS mode, which can come in handy when you’re abandoned beerless on an island late at night and you need to signal friends at the other side of the lake.

The expectations I had of my first power station were a little on the ambitious side. I was hoping that this would be the sort of thing that could keep my fridge running in an outage, but I would have known better if I had looked at the box a little more closely. The $700 priced PowerHouse II 800 excels in keeping multiple small devices charged for brief off-grid excursions.

A few minor design quibbles aside, the PowerHouse II 800 is small and lightweight enough to be tossed in the trunk for a weekend getaway. Even if it doesn’t have the capacity to keep household appliances running, having a power source like this topped up in the closet could certainly help keep your personal electronics energized during extended electrical outages. Good connectivity for solar panels and extra built-in lighting make it a natural fit for the outdoors.

The market for midrange power stations is vast. The last power station we looked at was the Jackery Explorer 1000. It subs out a few USB slots for an extra AC plug, and has a larger capacity consummate with its higher price tag. Products from EcoFlow in the $700 price range include companion apps and expandable capacities, which may be gimmicks, but they certainly catch the eye.

The life of lithium ion batteries is about 3 to 5 years, though that can depend on usage. For something this seasonal, I would expect it to last quite a bit longer. Anker suggests keeping the PowerHouse II 800 charged every 3 months in order to maintain lifespan.

If you’re on the hunt for something that’s a step up from your everyday mobile battery pack, the PowerHouse II 800 is a fine pick. It’s missing some of the bells and whistles that you’ll find on other power stations in its class, but nothing significant.