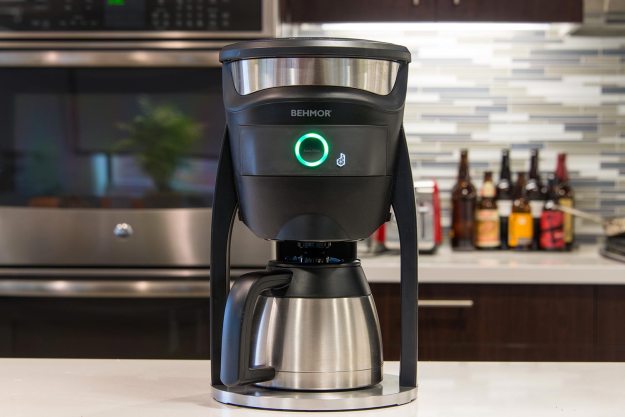 “Fiddling with brew temperatures and presoaks in Behmor’s app will turn anyone into a coffee geek.”

Companies generally try to sell connected coffee makers with the promise of brewing from bed — provided you load it up with grounds and water before you went to sleep. Of course, there are already programmable devices that let you set it to start making you coffee at 7:00 a.m., or whatever ungodly hour you wake up. The Behmor Brewer is offering something different: The ability to control all the details of your cup of coffee from a smartphone. If you’ve never thought about water temperature and pre-soak time before, the Behmor might just be the gateway brewer that gets you nerdy about Java.

The Behmor Brewer doesn’t look like a lot of other coffee makers — unless you’re used to the Behmor Brazen, which is essentially the same device, sans Wi-Fi. It looks like a coffee maker you might see on a space station, or at least at NASA. The 16-inch-tall brewer has a large, rounded top that perches atop three legs. The 40-ounce stainless steel-and-plastic carafe rests on a round stainless base. The stainless steel water reservoir (noticing a trend?) on top hides the heating element. It has a large shower head for wetting the grounds housed below. A gold flat-bottomed filter basket comes with the maker, but you can opt for paper ones instead as well.

Instead of a bunch of buttons, the Behmor has a big round one encircled by an LED ring that changes colors based on the stage of the brew. There’s also a small white button that blinks when it’s connecting to the Internet.

Setting up the Behmor is a fairly quick process, but be warned: You need to connect it to the Internet before it will make your first cup. It has to calibrate, so your first step is downloading the Behmor app, which just recently became available for Android, in addition to iOS. First, it’s going to ask if you can access your location. You must do this, because it will factor your elevation into its calibration, as water boils at a different temperature in the mountains. Create your account, then tap the little plus sign on the home screen. The app then takes you through the process of finding the Behmor Brewer and connecting it to your Wi-Fi network.

Once the brewer is hooked up to the Internet, it can start calibrating, which takes between 5 and 10 minutes (or 8, in my case). Once the calibration is complete and you’ve run the machine through a cleaning cycle, you’re ready to get your caffeine fix. There are two ways to do it: Press the big button on the machine, whose ring should be glowing a solid green, and the Behmor will resort to its default settings (200 degrees Fahrenheit with a 45-second pre-soak) and start brewing. Or you can use the app to do a quick or more customized brew.

It’s all in the app

One of the most striking things about the Behmor is its simple interface. If you walk up to it, you really only have one choice: Press the start/stop button. Everything else happens in the app. This is no mistake, as the engineers at Dado — the company that makes the Behmor’s software — told me that the instant you put a screen on a machine, it starts to look dated. Instead, Dado puts all the functionality in the app. That’s both good and bad. If your Internet goes out, you’ll still get a really good cup of coffee, but you’ll miss out being able to set it to your specifications. On the other hand, Dado can continually deliver updates that improve on the coffee maker’s performance without worrying about outdated software.

The coffee maker is so intuitive, there’s really only one button to press: start.

The first way you can use the app is to do a barebones, just-the-facts-ma’am approach. This is the “brew” button. It takes you to a screen asking you how many cups (eight or six), what kind of beans (packaged or fresh), and roast level (dark, medium, or light). It would actually be nice if these three screens were combined into one, because it’s a lot of hoops to jump through if you’re just choosing the defaults. The app will then take you to a fourth screen with a big check mark and two options: start brew or delay brew.

If you thought that was a lot of steps to get through, just wait, because that’s what you’ll be doing. Waiting. The whole process, from heating the water to pre-soaking to extraction, takes about 10 minutes. As the machine goes through the steps, you can follow along on the app (it will say “heating,” “pre-soak,” and “extracting” but won’t tell you how much time is left in each step or overall). You can also watch the LED ring on the machine, which changes from yellowish orange, to dark blue, to light blue, and finally green when it’s ready. Even if you have the app closed, you’ll get a notification (if you opted in for them) when it’s all over. There’s nothing quite like standing at the bus stop and getting an alert that your early-riser co-worker has already brewed the first batch of coffee of the day.

I quickly realized that I couldn’t specify fewer than six cups of coffee when using the Brewer. Behmor tells me this is because brewing smaller batches doesn’t work as well, because the grounds are spread too thinly across basket, letting the water flow through too quickly. Eventually, the company hopes to make an insert to allow for single-cup brewing.

The real reason for app is the other option, “craft.” It also starts off asking you if you want eight or six cups, but then it lets you choose a temperature between 190 and 208 degrees Fahrenheit. It should be noted that there are up-and-down arrows you have to hit to get through all those degrees, which isn’t a huge deal but it might have been easier with a slider. You can set the pre-soak time between 15 seconds and three minutes. This allows you to experiment with your favorite brand of coffee and see what it’s like with a hotter temperature and longer pre-soak. The Behmor Brazen let you do the same thing, it just uses buttons and a screen to make it happen.

But Behmor wants to give bean makers some control, too. Eventually you’ll be able to go to the “buzz” button in the app, find practically any brand of coffee, select it, and let the coffee maker default to the time and temperature the roasters think deliver the best cup. Users will be able to save their own profiles there, too. Right now, it has only partnered with Joe’s Brews.

One feature that’s missing from the app is a feature that lets you set a specific time for your coffee to start brewing. This might not be something the hoity-toity want, because they’ll be grinding (and maybe even roasting) their beans each morning, but hoi polloi still probably want it. It’s coming soon, says Behmor, which is good, considering the 10-minute brew time.

If you’ve ever had pour-over coffee made by a barista, you may have noticed he or she will wet the grounds before pouring all the hot water in. This lets the grounds “bloom” and degas, especially with freshly roasted beans. This may not be something you thought of doing with your own coffee maker, and you may not care what temperature the water gets to. But with the Behmor, you can taste the difference between a cup made with 198-degree water and one with 208. You can experiment with different pre-soak times as well. It just might turn you into a snob.

The Behmor Brewer was accurate when it came to temperature. When I put in 200 degrees Fahrenheit, the water heated up that hot in the reservoir. When it poured out into the carafe, it was 176 degrees Fahrenheit, which was too hot to drink, quite frankly.

Even though I was the only one in the office with the app on my phone, everyone who tried the default-setting coffee was a fan. The Behmor Brazen is one of nine drip coffee makers to have the Speciality Coffee Association of America seal of approval, and the Behmor Brewer, which is alike in terms of its heating element and design, makes it easy to see (or taste) why.

The Behmor Brewer makes a good cup of coffee, at the literal push of a button. Once you get it set up, you might not ever need to open the app again, but at that point, you’re paying $299 when you could just get the unconnected Brazen for $100 less. If you really want to geek out on your coffee, then it’s a great way to do it. The app is easy to use, but it’s pretty minimal at this point. It’s definitely missing a few features that we’re looking forward to, like the ability to save profiles of our favorite coffees, so we don’t have to remember specific temperatures and times. A few quirks might be deal-breaker for some buyers, like having to make so many cups of coffee at once. Still, Behmor and Dado are taking things in the right direction when it comes to a Wi-Fi-enabled home device. Starting my coffee maker from bed is nothing compared to the possibilities the Behmor is promising: Letting me brew coffee beans to the exact specifications my barista recommends.