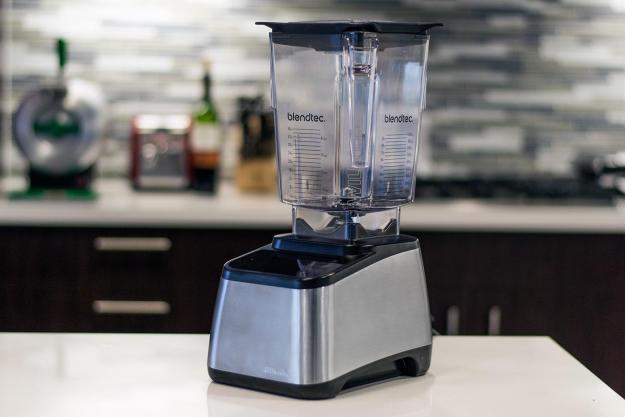 “The Blendtec is the best blender money can buy. If you can afford to spend $650, buy, blend, and enjoy.”

If you’ve browsed through YouTube any time in the past five years, there’s a pretty good chance that you’ve seen Blendtec blenders before. The company has made a name for itself by blending everything from iPhones to Bic lighers on camera — but pulverizing a smartphone doesn’t necessarily mean a blender will make you a good smoothie. To see how Blendtec’s blenders perform in real-world applications, we brought one of its top-of-the-line models into our kitchen and went berserk. Here’s how it went.

The first thing you’ll notice about this badboy when you take it out of the box is how damn heavy it is. Most blenders have a fairly hefty base, but Blendtec’s Designer 725 is like an anvil — which is a good thing. The heavy bottom keeps it stable, and all that extra heft presumably means a bigger, more powerful motor.

It can reduce a brand-new iPhone to a pile of dust, and make short work of fruit and ice.

The setup is more complex than your average blender, mostly because the Designer 725 is equipped with an interface that’s not as straightforward as what you’d typically find on a standard blender. It’s like upgrading from a car to a spaceship, so be prepared to learn a few new controls.

Not to worry though — the first time the machine fires up it’ll walk you through all the different functions in an easy-to-follow tutorial. It throws a lot of information at you here, which is a little hard to absorb all at once, but even if you miss something on the first go, the blender’s symbols make it fairly easy to figure out on your own.

The first feature you’re likely to notice after unboxing the Designer 725 is its distinct lack of buttons. In place of physical ones, Blendtec outfitted this blender with a big, beautiful touchscreen that occupies the machine’s entire face. The snappy, responsive touch buttons are also accompanied by a slider, which offers easy and intuitive speed control.

Speaking of speed, Blendtec boasts that the D725 offers 100 different speed settings, which is definitely overkill. Are you going to be able to tell the difference between a smoothie made at 98 versus one made at 96? Probably not — although having such a high degree of control over the blade’s RPMs is definitely not a bad thing.

Even more impressive than the blender’s speed is its power. Sporting a ridiculously powerful 1,725 Watt electric motor, the Designer 750 has more horsepower than some go-karts we’ve ridden (3.8 at its peak), and is drastically more powerful than flagship blenders from other brands — including its main competitor, Vitamix.

And the features just keep on coming. On top of the sleek interface, variable speed, and beefy motor, Blendtec’s Designer 725 also has brains. The blender comes with a range of pre-programmed mix settings, including cycles optimized for smoothies, salsa, ice cream, whole juice, and hot soup. There’s even a self-clean button that’ll take care of the mess when you’re done (with some water, of course).

These cycles will run automatically at the touch of a button, but if you should ever feel inclined to grab the reigns and take over, the D725 also has a Pulse button, as well as the aforementioned slider that allows you to run the blender at whatever speed you like.

We put this blender through a pretty rigorous testing gauntlet to see how it stood up to various fruits, veggies, and other foodstufffs; and even after seeing all of Blendtec’s infamous “will it blend” videos, we were still impressed by how well the D725 performed.

Despite having fewer blades, the BlendTec blender did a far better job at shredding up ingredients.

For a blender that can reduce a brand-new iPhone to a pile of dust in just a few minutes, it should come as no surprise that this machine makes short work of fruit and ice. The massive batch of smoothies we made on our first blend session were about as smooth as they come. The guac and hummus we made on day two? Fine and silky — you couldn’t find a chunk in there if you tried.

It’s definitely a great blender, but how does it compare to other machines? We needed some perspective, so after a few preliminary smoothies, we put it up against a cheaper, but equally-hyped up blender — the Ninja Professional.
In a side-by-side smoothie test, we ran both of these machines for an equal amount of time with the same ingredients (ice, juice, and various fruits & veggies), and when it was all said and done, the differences were obvious.

Despite having fewer blades, the BlendTec blender did a far better job at shredding up ingredients. The chunks in the Ninja smoothie weren’t necessarily big, but they looked massive in comparison to the fine-ground mixture the D725 produced. Things like seeds and broccoli buds –which managed to survive in the Ninja– were almost completely pulverized when the Blendtec finished its cycle.

Another big plus is that you don’t have to worry about strategically layering in your smoothie ingredients (or whatever) before you hit the “puree” button. Unlike the crappy Goodwill Oster blender I’ve got at home, it doesn’t matter if the ice is on top or at the bottom — the D725 will mince it up just the same.

It’s also much easier to clean. Blendtec’s blade is purposefully blunt, so you don’t have to worry about it biting back and slicing your fingers open when you attack it with a sponge. Technically you don’t even need a sponge — you can use the machine’s self-clean cycle to take care of the mess, but in our experience it’s usually faster to do it manually.

After a couple weeks of intense use and comparison, it’s abundantly clear that the Designer 725 is one of the best blenders money can buy.

In a lot of ways, it’s like a Ferrari. Do you need one? Probably not — your ‘96 Kia Rio will get you to work just the same — but do you want one? Hell yeah you do. It’s faster, better looking, more powerful, and has a smoother ride. If you want one and can afford the hefty price tag, then by all means, get yourself a Blentec.

If price is an object for you, you might consider going with something like the Ninja. It’s 400 bucks cheaper, and gives you almost the same blending results.

If you’re all right with dropping $650 on a blender, the Designer 725 is the one you want. It’s more powerful than other blenders in this price range, has better features, and comes with an 8-year warranty. ‘Nuff said.