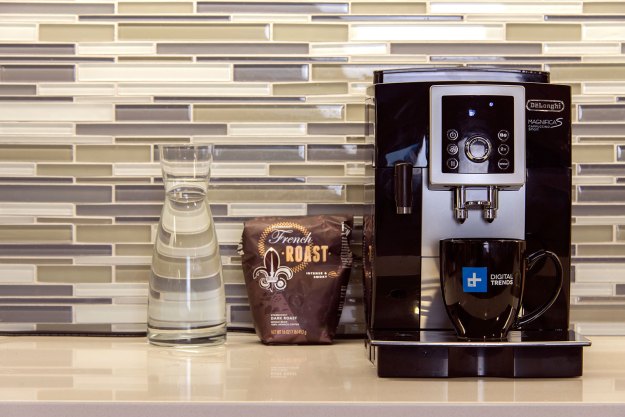 When it comes to automatic specialty coffee drink makers we want something that is easy to use, but doesn’t sacrifice taste. We found that in the DeLonghi Magnifica S. From its straightforward design to high-end extras like a warming tray, this machine brews a delicious espresso with ease. Our only quibble is demystifying the icons on the control panel can be trying.

The DeLonghi Magnifica S is an attractive specialty coffee maker, but it’s far from what we’d call sexy. We did appreciate its straightforward design. Bathed in shades of silver and black, the Magnifica has an upscale feel, but its boxy size makes it look like other specialty coffee makers on the market. Measuring 16.9 by 9.3 by 13.8 inches and weighing just less than 20 pounds, it doesn’t take up a ton of counter space, and it’s relatively easy to move.

It’s not immediately obvious what the symbols mean, and when they blink, it means something entirely different.

The front of the machine is stylish, with its dual spout, coffee buttons, and dial for increasing aroma intensity. You’ll also find a hot water spout, which can be removed and replaced with the milk container for crafting cappuccinos. The top of the Magnifica S is decked out with a heating tray and the bean container. There’s also a spot under the bean cover where you can insert ground coffee. Speaking of coffee grounds, the used grounds get stored in a container behind the coffee tray. To empty it, simply slide out the entire drip tray. Note: When emptying the container you’ll notice the grounds are in that perfect spherical shape that you get when making an espresso using a manual machine.

Above the buttons and knobs is a black area. This is the control panel, and it serves two purposes: to show you what type of drink is being made and to alert you when the machine needs attention. In both cases, an icon on this screen will illuminate. It’s not immediately obvious what each icon symbolizes. To make things a little more complicated, occasionally the image will blink, which means something entirely different.  For example, an icon that looks like a beaker with two rows of dots means “empty grounds container,” but if it’s blinking it means, “insert grounds container.” The manual includes a guide to all of these symbols. After a few uses, you’ll get the hang of it.

Initially, it seemed as if it would take a bit of time to properly setup the Magnifica S, but it actually turned out to be one of the easiest high-end models we’ve encountered to date. It took less than 10 minutes to remove it from the box, plug it in, turn on the main power switch in the back of the machine, clean a few items, install the water filter, fill the water container, and add some beans. Voilà. We were ready to brew our first cappuccino. Of course, there were other accouterments included: a water hardness test indicator, a coffee scoop, a brush for removing excess grounds, and a descale accessory. You can also select coffee strength by turning the knob (the closer to Max, the more beans it grinds) on the front of the Magnifica. You can change this setting for each drink you make as well.

Making a cup of Joe or a specialty drink is just as easy as the setup. For this part, you’ll likely want to refer to the manual, since the buttons just have images of coffee cups with various fill levels, though the cup with the smallest amount of liquid is obviously an espresso. The Magnifica can make an espresso, coffee, long coffee, cappuccino, latte macchiato, and hot water. If you’re feeling like something fancier, refer to the included recipe book.

To brew a drink, you’ll need to press the front power button, select the type of drink you want, choose a coffee taste (mild, standard, or strong) by pressing the coffee bean button, and then press the brew button. When the machine begins the brewing process, it makes a loud noise that if you’re not awake yet, it will definitely give you a jolt. It makes some gurgling sounds that somewhat resemble an upset tummy and border on the rude-noise category. A note about the coffee bean image: The screen will display a single coffee bean – it grows to represent taste. During testing, we also became enamored with the brew button. It’s pretty much the mastermind of the Magnifica, since this button can stop a brew, add more liquid (press for three seconds), and lets you select grounds instead of beans (press it for three seconds when first selecting a coffee choice).

Because the Magnifica has two spouts and options for making one or two drinks, you can brew two specialty coffees simultaneously. We were able to fit two standard-size coffee mugs on the tray side-by-side and make two cups. That said, you’d have better luck if you use proper espresso cups. You can also press the option for two cups and make your drink a double. While we’re on the topic of the spout, it does move up and down. For an extra creamy espresso, slide the spout down into the cup.

To make a cappuccino, you have to attach the milk container. To do this, you’ll need to remove the hot water attachment. It may seem like you’ll break it if you pull it in the wrong direction, but don’t over think it – the attachment removes easily. Attaching the milk container is just as straightforward; however, you’ll want to fill it with milk first. There’s a knob on the container to adjust milk froth. When you empty the milk, the accessory cleans itself. You’ll want to put a cup under the spout, as hot water is expulsed during this process.

Perhaps our favorite feature is the warming tray perched atop the Magnifica. The purpose of this is to, of course, get the coffee cup warm before adding liquid. Like pre-warming a plate in the oven, this helps enhance the overall coffee experience – making it feel special.

If the coffee doesn’t wake you, the machine might

The Magnifica S isn’t the quietest coffee maker we’ve tested, but the majority of the noise is emitted during the drink-initiating process. At 80 decibels, the sound is equivalent to a garbage disposal in use. That said, when the coffee is poured it clocks in at 54 decibels, which is similar to the sounds you’ll find in a quiet suburb. In our tests, we measured coffee temperature, how long it took to make, and overall taste. According to the National Coffee Association, coffee temperature should be maintained at 180 to 185 degrees Fahrenheit, though that is too hot for some folks. While the Magnifica S didn’t brew coffee that met that temperature, all the drinks were hot enough to enjoy. We did find that putting the cup on the warming tray first did make a difference in overall coffee heat.

The Magnifica S made a variety of 13 specialty drinks before needing to empty the grounds and refill the water tank. When the grounds are full, the machine will not work until you discard them. Overall, all the drinks tasted good, and we experienced the flavor from the beans. If you prefer strong coffee, select the biggest bean and turn the knob. This isn’t a gimmicky feature; it produces a stronger coffee flavor.

Overall, the DeLonghi Magnifica S is a solid machine. It’s not quite as sexy as the Jura GIGA 5, but it’s easier to use and, at $1,300, a quarter of the price. Would we call it magnificent? Probably not, but it makes delicious coffee, plus a few fancy drinks. Isn’t that what you want from an automatic coffee machine?

Best Keurig Deals: Get a K-Cup coffee maker from $80 today

The best Nespresso machines for 2021