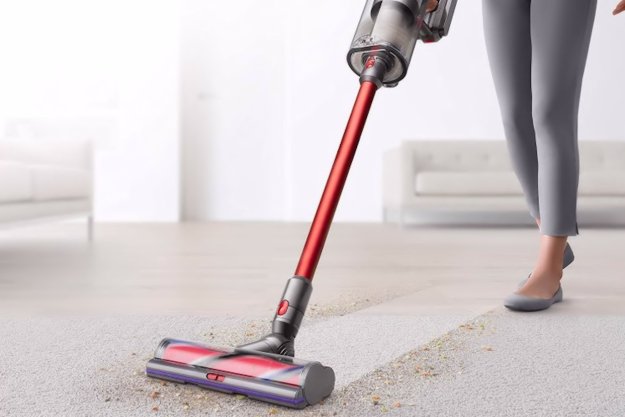 “A full-size cleaning foot and 18 cyclones of air make this cordless stick vac clean like no other.”

The Dyson V11 Outsize is exactly what it sounds like. It’s bigger than any other Dyson cordless vacuum on the market, and at $800, it’s more expensive than the other front-runners in the cordless vacuum category. Do its size and capabilities justify the price?

Here’s what we liked, and what we didn’t like, about this hefty cordless.

Think of the Outsize as the bigger little brother of the Dyson V11 Torque Drive. The Outsize has most of the same features as the Torque, it’s just larger. The bin is 150% bigger, making it the same size as a bin you would find on a corded vacuum, which is great because you don’t need to empty it as often. The cleaner head is 25% bigger, too, making it just as big as those on most upright vacuums.

Somehow, Dyson was able to add on these extra features and end up making the Outsize only less than a pound heavier than the V11 Torque Drive. This means that it weighs 7.85 pounds total, a little heavier than its biggest competitor, the Tineco Pure One S12, which weighs 6.61 lbs.

The Outsize is a monster when it comes to sucking up messes. The motor spins the brush bar up to 60 times a second at 125,000 rpm, creating 18 cyclones to generate centrifugal forces up to 79,000 Gs to suck up lint and dust. The six-layer filtration system traps 99.99% of particles as small as 0.3 microns to make sure those little buggers don’t escape.

All of this power is controlled by three different modes. Eco mode has less suction and gives you a longer battery time, auto mode automatically adjusts the suction depending on your floor’s needs, and Boost mode is basically super-suction mode. The nifty LCD display on the handle of the Outsize tells you what mode you’re in, and also tells you when there’s a clog.

I wonder if the suction is too powerful.

That all sounds good, but how well does it really suck? While I was testing, my huskies just happened to take eggshells out of the trash can and proceeded to crumble them all over the carpet. The Outsize sucked them up in Auto mode in one pass, no problem, and even vacuum up every bit of husky hair without clogging. In fact, I wonder if the suction is too powerful. There were times that I had a lot of trouble scooting the cleaning foot across the floor, especially in the Boost mode.

The cleaning foot consists of two lines of bristles wrapped around the roller. It does a really good job of sweeping up messes, though it seems to have some problems with tossing small bits around. I tried cleaning up some Nerds candies that I dropped on the floor, for instance, and the brush threw the tiny candies all over. On the upside, hair and bits of thread don’t seem to get wound up around the brush. That’s a big win for people with long hair.

I really like how easy it is to empty the 0.5-gallon bin. You just lower it into the trash can, push the release button and all of the dust falls directly into the trash can. With most other vacuums, both cordless and not, there is a filter inside of the bin that can trap dog hair, lint, and other debris and keep it from falling out of the canister. This means that you have to stick your hand up inside to free whatever is stuck up in there. Outsize has solved the hand-in-bin problem. When you push the canister release button, the whole canister moves downward, away from the filter. This frees anything that is trapped.

One thing the Outsize is missing is a self-cleaning tool for its filters, like the one that is included on the Tineco Pure One S12. That’s just a small gripe when you consider how well this cordless vacuum cleans. Cleaning your filter regularly helps the stick vac suck better and improves the life span of the vacuum. Cleaning a filter requires you to dust it off in a trash bin, rinse it with clean water, and air dry it, which isn’t a lot of work.

The Outsize has a runtime that is comparable to other top-of-the-line cordless vacs. For example, the Tineco Pure One S12 has a run time of 100 minutes and the Roborock H6 can clean for about 90 minutes, while the Outsize can run for up to 120 minutes. Of course, runtime depends on the power mode you’re using, floor type, and the type of attachments being used.

While running the Outsize on Auto on a low pile rug, the display on the handle told me that it had a run time of a little over 40 minutes. In the same conditions using the Eco mode, the display said I had about 65 minutes of cleaning time, and on Boost, I had about 10 minutes of cleaning time. For a stick vac, that’s not bad. I was hoping to see the 120 minutes pop up on the screen, but no matter what I did, I couldn’t get it to. That was a bit of a disappointment.

The Outsize also has swappable battery packs and two chargers. So if you have a really big job, you can keep going as long as you need. Each pack does take 4.5 hours to charge, though.

The Outsize is quieter than a lot of stick vacs, but don’t expect to be able to watch television while you vacuum. It won’t blast your ears out, though it has its moments where you wonder if you’ve had some hearing loss. When the Outsize switches into Boost mode, it is, understandably, very loud. Thankfully, you won’t need it very often.

If you want a cordless vacuum that runs like a corded upright, the Dyson V11 Outsize ($800) is a great choice. It has a full-size bin, large brush, and plenty of power to take on most cleaning tasks. The suction is powerful and really hard to beat and the battery life is pretty good. Overall, it’s an excellent vacuum.

It is quite a bit more expensive than the top-of-the-line Tineco Pure One S12 ($430), and a little heavier. It doesn’t have self-cleaning filters like the S12, but if you want a cordless vac that cleans like an upright, you can’t beat the Outsize.

Dyson doesn’t have a great track record with longevity on their cordless vacuums. In fact, Consumer Reports found that nearly half of Dyson stick vacs develop problems within the first five years. This includes V-rated vacuums. I’m hoping that the Outsize breaks away from this trend, but it seems to be made a lot like its predecessors.

Luckily, it has a 2-year parts and labor warranty. When I contacted Dyson, they refuted the reliability of Consumer Report’s findings and a representative had this to say: “We conduct rigorous battery life testing in the development of our products, including thousands of battery life cycles. We also conduct very intense reliability testing, where we put our machines in the worst conditions possible, in order to ensure that they can withstand the long-term use that our owners expect.”

Yes. I would definitely recommend it.