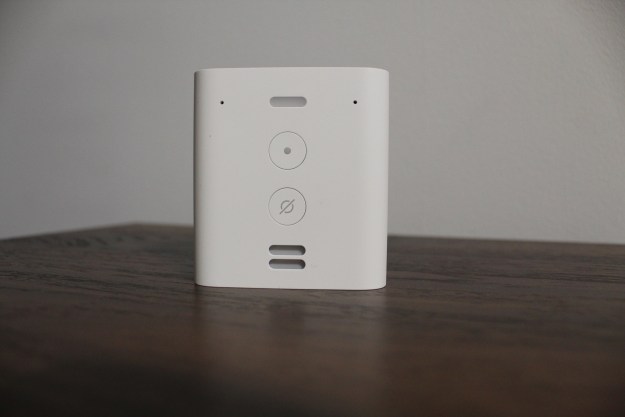 “Being a stand-alone, fully functional Echo speaker, the Echo Flex is an excellent value.”

Amazon recently released several new Alexa devices, and one of the company’s most affordable new offerings is the Echo Flex. The Flex retails for $25, but during Cyber Week and other shopping events, Amazon has been offering the device on sale for an even lower price. What is the Echo Flex? What exactly can the Echo Flex do? What features does it boast? Is this $25 device a suitable alternative to larger, more expensive Echo speakers?

Plug it in, plug it in

However, if the app doesn’t automatically prompt you to set up your Echo Flex, you just tap the devices icon in the app, select the “+” sign to add a device, choose to add an Echo Flex, and follow the on-screen prompts. Overall, setup takes less than five minutes.

The Echo Flex speaker is extremely small, measuring only 2.8-inches tall and 2.6-inches wide. Unlike most Echo speakers that have a cylindrical shape, the Echo Flex is box-shaped. It has a USB port on the bottom portion where you can connect the optional accessories (more on that later), and you can even connect a charging cable and charge up your phone.

You can plug the Flex directly into your wall outlet where it can sit unnoticed. It’s not too much bigger or any more noticeable than a typical smart plug.

On the front face of the Echo Flex, there’s an indicator light that lets you know Alexa is listening. There’s also an action button and a microphone off button, so you can completely stop Alexa from listening if you want. On the side of the device, there’s a 3.5 mm audio output jack.

Amazon has other miniature Alexa devices, like the Echo Input. But, the Echo Input requires a separate speaker to operate. The Echo Flex is a completely standalone, extremely compact Alexa-enabled device. Alexa’s responses come directly from the Flex, as it has its own built-in speaker for playback and microphones for voice detection.

The device can control your smart devices, play the news, perform Alexa skills, answer questions, and more. You can even use the Echo Flex to make hands-free calls, use custom skills you create through Blueprints, manage your schedule, or get the morning traffic report.

You can play music on the Echo Flex, just as you can with larger Echo speakers, but Amazon clearly states in the product’s description that the speaker is “not optimized for music playback.” So, the audio quality on the Echo Flex isn’t very good at all. Yes, you can hear music, and you can hear Alexa’s responses, but the sound isn’t very loud and it lacks depth. It probably sounds about as good as the speakers on an average smartphone. You can, however, connect a more powerful speaker via Bluetooth or using the 3.5 mm audio output jack.

It’s not optimized for music playback

Although the lousy audio can be circumvented by connecting an external speaker, there’s nothing to help out the Flex’s poor speech detection. The Flex’s microphones don’t do a very good job of hearing commands unless you’re in close proximity to the device. You usually have to be within six to eight feet of the Flex to get it to consistently hear your commands. This is perhaps the device’s biggest flaw.

The Echo Flex is useful in areas like the kitchen or the garage. You can control your smart lights and use Alexa without having to shout commands at another Alexa speaker in another room in your home. If you’re cooking in the kitchen, you can ask Alexa questions about measurements and recipes, or have her control your smart appliances.

Plug either of them into the bottom of the Echo Flex, it automatically recognizes the accessory. There’s virtually no setup required. Since the Echo Flex only has one USB port, you can only use one accessory at a time, so you cannot use the light and the motion sensor simultaneously (unless you have two separate Echo Flex speakers).

The motion sensor is a PIR (passive infrared) sensor. It can detect motion up to 20 feet away, and you can create routines using the sensor. For instance, you can have your lights or a fan turn on when you enter the room, or you can have Alexa play a custom message when you walk by.

The nightlight also connects to the Echo Flex’s USB port, and it features 6 RGB LEDs you can control with your voice or with the Alexa app. You can tell the nightlight to change colors, adjust the brightness level, or create routines using the light. It also has a sensor that automatically turns the nightlight on when it gets dark, and then turns the light off when it’s daylight.

I tested both accessories as part of the review, and I found myself using the nightlight more than the motion sensor. The nightlight isn’t super-bright, but it’s just bright enough to light the way in pitch dark. It’s fun to change the light’s colors from pink to blue to green, and the light makes the Echo Flex look more complete, and it improves the overall aesthetic.

The motion sensor, while somewhat useful, operates on a bit of a delay sometimes. I set a routine to have the lights turn on when the sensor activates. However, it took almost 45 seconds for the action to fully take place. The sensor also falsely reports motion at times because of certain environmental triggers. So, all in all, I’d say the light is more of a worthwhile addition.

The Echo Flex comes with a 90-day limited warranty. However, you can purchase an extended accident protection warranty from Square Trade for between $3 and $8 that covers the device for up to three additional years.

Being a standalone, fully functional Echo speaker that retails for $25, the Echo Flex is an extremely good value. Although it doesn’t offer stellar voice-recognition or sound quality, the device still has its merits as an extra speaker for placement in rooms like garages, bedrooms, and kitchens.

That depends. The Echo Dot is a more powerful device in terms of its sound quality. It has four far-field microphones to pick up your voice, and it has a significantly larger driver for playback. However, the Echo Dot is designed for positioning on a surface, instead of in a wall outlet. The Dot also retails for $50, which is double the price of the Flex.

Amazon updates its hardware… a lot. The company continues to come out with more and more Alexa devices, so the Alexa app likely isn’t going anywhere for a long time. The company also appears to be focusing more on affordable speakers and displays. The Echo Show 5, Echo Show 8, Echo Dot with Clock, and Echo Input are all examples of such affordable Echo offerings.

Based on what we’ve seen from Amazon over the past few years, history tells us the company will likely come out with a new or different version of the Echo Flex. But, this does not mean the company with discontinue support for the Echo Flex anytime soon. You can confidently purchase the device, and it should last you for quite a while. The Echo Flex is well-made overall, and it shouldn’t randomly break without reason.