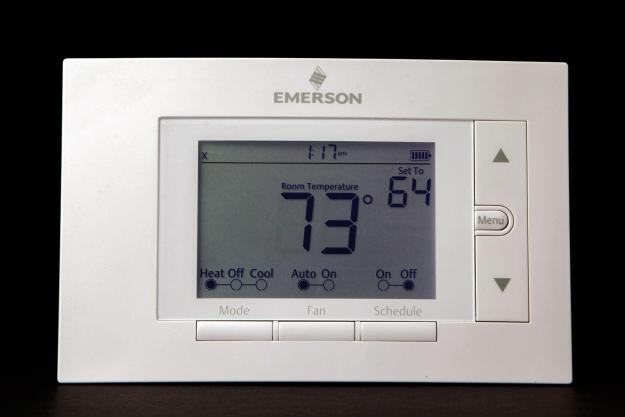 “The Sensi smart thermostat offers plain Jane functionality at a price that’s easy on the wallet.”

It isn’t easy being green—especially for thermostats. Making them smart enough to improve energy efficiency yet dumb enough that we can operate them without a degree in astrophysics is a challenge. Fortunately, Emerson’s Sensi earns some good grades on both counts, albeit with a few deductions for poor penmanship.

There are no cute icons to tell you you’re saving energy or have the personal thanks of Ed Begley, Jr.

Joining the growing ranks of remote-controlled smart thermostats, the Sensi is less expensive that sexier models such as the Nest and Honeywell’s Lyric. With an average retail price of $125, it’s half the price of others, yet it has the basic functions you’d expect from a smart, Internet-connected thermostat. The Sensi connects wirelessly to a home Wi-Fi network, allowing it to be controlled and programmed using an iOS or Android device.

As well as being less expensive, the Sensi is also low maintenance. It doesn’t, for example, require separate power (the so-called C wire) and can run on two included AA batteries. It does not have a color LCD screen or a proximity sensor, so it doesn’t attract much attention and it doesn’t track your whereabouts. Its plain Jane monochrome screen is succinct (battery level, temperature, time, and Wi-Fi connection); there are no cute icons to tell you you’re saving energy or have the personal thanks of Ed Begley, Jr.

The Sensi also isn’t picky. It works with a wide variety of heating and cooling systems, including heat pumps and most 24-volt systems.

If you’re replacing an old rotary thermostat, you’ll need a screwdriver and a drill to install the Sensi. It’s nearly 6 inches wide, so it needs a little more wall space and a couple of new holes. Your instructions, like so much else these days, come in the form of a downloadable app (there’s no detailed paper manual).

For the most part, the app has sufficient information. The Android version makes helpful suggestions, such as to take a picture of the existing wire configuration, although it glosses over other points, such as explaining the importance of the built-in level. And we found it was far from perfect.

In the midst of our installation, the app failed to recognize our wiring configuration (R and W). Making matters worse, it would not allow us to proceed. There was no way to move forward in the app or proceed on our own. The installation process was halted and a dialog box asked us to contact the company with the thermostat model. Frustrated, we noted that the app did not include Emerson’s help number, although it’s on the Sensi pamphlet.

Support staff suggested simply telling the app we had a C wire (even though we didn’t) and ignoring subsequent references to the C wire. We followed their instructions and the rest of the process—activating the thermostat via direct Wi-Fi and then connecting it to our network—worked without further trouble.

We tested the Sensi using the app to set a high temperature that would initiate the heating system. Within seconds the heat came on and everything functioned as it should, sans the C wire.

In day-to-day use, the Sensi is responsive and not overly complex. You set the temperature on the app, and it either turns red to indicate the heat is on or blue for cooling. The thermostat also proved obedient to online commands, turning on the heat almost immediately.

Rather than automatically learning your quotidian habits, the Sensi takes the traditional programmable approach, allowing you to create your own heating and cooling schedules. You can set a typical week for turning things up and down Monday through Friday, and then a weekend schedule, or create your own custom seven-day routine. You don’t have to sort through menu settings on the thermostat itself (and then hope for the best). All the scheduling can be done easily via the Android or iOS app. While there isn’t a lot of complexity associated with the Sensi, it does allow you to make one important tweak. In the advanced settings area of the app you can adjust the thermostat to register the same temperature as your old thermostat. For example, our old model said it was 62 degrees Fahrenheit in the basement, but the Sensi model said it was 64. No problem, just bring the Sensi down 2 degrees and it will register the same 62. Why would you want to recalibrate this? Mainly because if you’re accustomed to setting the temperature, let’s say, in winter to prevent the pipes from freezing, you’ll want the new thermostat to register the same as before given one’s experience with past winters and protecting your home.

On the downside, after our experience with the C-wire issue, Sensi support staff warned us that the batteries may run down more quickly (perhaps within weeks) and that the thermostat would probably sever the Wi-Fi connection to conserve power. After one week of use, our Sensi was still online; your mileage may vary.

If you’re not looking for sex appeal in your smart home a home thermostat and are more concerned with utilitarian values, the Sensi is a worthwhile bargain. It won’t hook up to any other elaborate smart home systems, and it won’t learn your circadian rhythms and start adjusting the heat and cooling automatically. You have to tell it what to do. That isn’t always a bad thing.