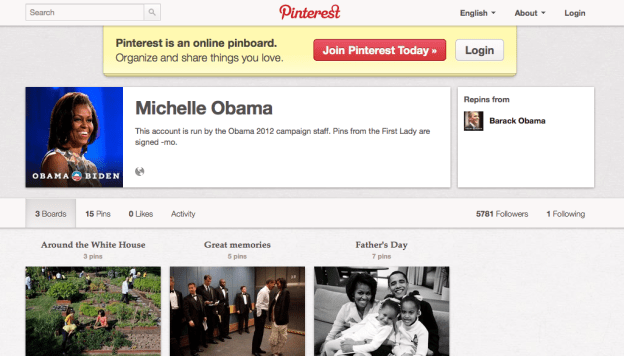 If you thought your “Harajuku Nail Art” Pinterest board was pretty nifty, what about one called “Around the White House” with pictures of you and your family gardening in the First Veggie Patch? Or another titled “Great Memories,” with a photo from the 2009 inauguration, when your husband became – ahem – leader of the free world?

It’s a good thing that Pinterest isn’t an awesomeness competition because, frankly, we’d have lost. First Lady Michelle Obama joined the ranks of the highly popular scrapbooking network Pinterest today, becoming the latest political spouse to get in on the pinning craze. In addition to “Around the White House” and “Great Memories,” which respectively contain photos depicting activities at 1600 Pennsylvania Ave. and more personal shots such as one from the Obamas’ wedding day, a third pinboard called “Father’s Day” includes pictures of the President with his daughters and family. The account is run by the 2012 campaign staff, but certain photos – like the president cheering in the bleachers at one of his daughters’ basketball games – are signed “-mo” and are from Mrs. Obama herself.

Pinterest – the top board categories of which are “Home,” “Arts and Crafts,” and “Style/Fashion,” according to business intelligence firm RJ Metrics – is thought of as being primarily a women’s site. Estimates for the gender skew of the site range from 68.2% female to 97% female, and as the election draws near, Pinterest is becoming an ever-more attractive way of reaching the female electorate. Mrs. Obama is only the latest of a number of politicans and politicans’ spouses coming around to Pinterest as a viable means of reaching the “soccer mom” demographic. President Obama’s campaign opened an account in March, announcing via Tweet: “Organizers, infographics, murals, and cake – now pinning all of the above for #Obama2012 on Pinterest.” Ann Romney, wife of presidential hopeful Mitt Romney, also has an account, which contains photos of her family, crafts, and scenes from the campaign. Sen. Claire McCaskill (D-MO) and Iraqi war veteran Tammy Duckworth, a Democrat running for U.S. House of Representatives in Illinois’ 8th District, have likewise recently started pinning to promote their runs for office, while Sen. Kirsten Gillibrand (D-NY) has started an account for her organization, Off The Sidelines, which promotes civic engagement among women.