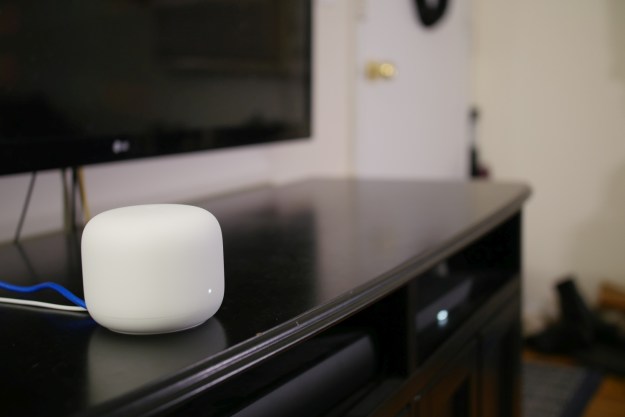 “Google's Nest WiFi is a great mesh networking system with a secret. It's also a smart speaker.”

For the average person, getting internet service at home is simply done by calling up a local cable provider or surfing the web to uncover some of the best deals around. Once there’s something worth subscribing to, a technician comes out for the installation. You’re usually up and running in a matter of minutes. And frankly, most people never ever have to worry about replacing a router. Well, that’s unless they realize later on that they need more coverage to fill in any gaps.

That’s where the Google Nest WiFi comes to life with its whole-home coverage and consistency. Fundamentally, the Nest WiFi aims to accomplish the same task as most other Mesh Wi-Fi routers, but Google’s interpretation is distinct for notable features that continue the company’s focus on delivering multi-functional devices for the smart home. Not only will it be the brains behind monitoring your home’s Wi-Fi network, but it’s a system that will help to build up your smart home with Google Assistant. Why just stick with smart speakers when this incorporates Google’s smart assistant into its access points?

It’s priced at $189 (originally $269) for the starter pack, which includes the router and access point. Are you looking to expand your existing system? You can buy additional access points for $149 through Google directly

Routers can be overwhelming to set up, especially for those who don’t have a background in networking. Google makes the process painless and simple with the included quick start guide. I’ve had my fair share of frustration with overly complex router setups, but this one was without question the simplest to get up and running.

Using the Google Home app on my Android smartphone, I was guided to connect the Nest WiFi router to my existing Xfinity xFi Gateway modem using the included Ethernet port.

Once I finished setting up the appropriate SSID and password for my network, connecting the Nest WiFi point required me to capture the QR code on the unit using the Google Home app. From there, it automatically communicated with the router to establish the mesh network.

The real key to Google’s approach is Google’s own brand. The Nest WiFi maintains the company’s software look and feel. If you use a Pixel phone, or own another Google Home device, the Nest WiFi will seem familiar from the start.

There’s little love given to routers in general. Once they’re set up, they’re typically left hidden behind a cabinet or entertainment system and forgotten unless a problem arises. Here, the integration of Google Assistant with the Wi-Fi point shows the company embracing the multi-functional aspect of its devices.

Not only is the Wi-Fi point helpful in expanding coverage in the home, but it can be used to do all the same things as any of Google’s smart speakers. It essentially doubles as a Nest Mini speaker, allowing it to play music, access Google Assistant, and even control other connected smart home gadgets through voice actions.

Speaking of music, it’s a slight step up from the Nest Mini’s audio performance with the pronounced bass it pumps out, making it a smidgen more substantial and pleasing to the ear. Similar to the Nest Mini, proximity sensors can detect when you’re close, and will light up the LEDs on top of the unit. Even better, I like how the LED ring around the body lights up whenever you command the Google Assistant.

Mind you, it’s $149 a pop, versus a meager $50 for the Nest Mini. The Nest WiFi access point is router first, smart speaker second. Still, it’s nice to see it function as more than just an access point for a mesh network.

The pricing is on par with its rivals, seeing that add-on satellites for Netgear’s Orbi and Amazon’s Eero mesh systems have a similar MSRP. Letting the hardware double as a smart speaker gives Google’s offering more value.

I live in a small apartment that’s around 1,100 square feet, so my existing xFi Gateway manages to cover most places, though outlying areas can be spotty. The worst spots are in my bedroom and bathroom, where I tend to see weaker Wi-Fi connectivity, usually at around one or two bars. The signal needs to pass through a couple of walls and other obstructions.

The Nest WiFi mesh system blankets those areas with sufficient coverage, without degrading speed in the process, by simultaneously leveraging the 2.4GHz and 5GHz bands for optimal performance. I’m still able to get speeds of about 900 Mbps down and 40 Mbps up, which are similar to what I get when I’m in the same room as my Xfinity xFi Gateway. For those outlying areas that didn’t quite get blanketed previously, it’s great to see that my connection speed is now retained.

The benefit here is the added reach of my Wi-Fi network. Even though it doesn’t drastically change my current setup, I can enjoy better Wi-Fi in the extreme corners of my home, which makes for a more reliable connection overall.

By itself, the router delivers upwards of 2,200 square feet of coverage, while each Wifi point adds another 1,600 square feet. The benefit here, naturally, is that you can scale the setup accordingly to deliver proper coverage throughout the home. Of course, this isn’t something you can achieve with most routers, unless they’re designed with mesh networking in mind.

Overall, Google’s Nest WiFi is not the most technically capable option. However, the average American home is just under 2,500 square feet. That means a Nest WiFi router with one access point should be adequate.

Google’s approach to this is networking simple and easy, something I feel is achieved here with the Nest WiFi. However, those who crave advanced controls and features will be disappointed by the slim offerings here.

Sure, there’s access to features such as setting up a guest network, parental controls/restrictions, and even prioritizing traffic, but you won’t find other advanced features that serious networking geeks love about routers — like MAC address filtering, specifying static IP addresses, and dynamic DNS. There are mesh systems that do offer these features, but the cost attached to them is higher.

Another thing that may disappoint people is that the Nest WiFi router only features a single Ethernet port. Meaning, you’ll need to purchase an Ethernet hub if you need to hardwire several devices to the network. The majority of mesh Wi-Fi routers tend to offer a single ethernet port, but then you have a few, like the Linksys Max-Stream AC2200 router, which are more generous with its four Ethernet ports.

While I do appreciate the Google Assistant integration with the Wi-Fi point, it really would’ve been beneficial to have an Ethernet port as well — but sadly there’s none.

The broadcast feature is beloved for so many reasons, especially when it comes to announcing dinner’s ready throughout the home. Now, though, you’ll be able to broadcast messages to specific rooms. Just say for example, “Hey Google, broadcast to the bedroom, ‘breakfast is ready!'”

Did you know Google Assistant can deliver personalized information to multiple people in the home? Google Assistant is now capable of supporting up to six people’s voices with Voice Match on a smart speaker or display, so that you only get relevant details that pertain to you.

In busier or noisier areas, it’s possible that Google Assistant can be initiated by accident. If you want to adjust the sensitivity whenever the wake phrase “Hey Google” is spoken, you can now do it through the Google Home app.

Google Assistant’s interpreter mode can be handy when you have guests over who speak another language. Rather than having to translate each spoken sentence, interpreter mode will simply translate conversations in real-time — so conversations can be spoken naturally. You can enable it by saying, “Hey Google, be my German translator” or “Hey Google, help me speak Spanish.”

It’s more critical than ever before to ensure you wash your hands properly, especially with the coronavirus COVID-19 outbreak continuing to spread. The Nest Mini offers a brand new feature to help out kids. You simply say, “Hey Google, help me wash my hands,” and from there, it’ll play a tune for 20 seconds to encourage adequate time for washing hands.

Since it’s stationary, there shouldn’t be much of a concern about it going bad. In the event it does, there’s a one-year limited warranty that covers defects.

The Google Nest WiFi is priced at $189 (originally $269) for the starter pack. It’s more costly than some of the alternatives. However, incorporating Google Assistant adds value, but it’s also one of the easiest mesh systems to configure and cover your entire home.

If you’re looking for something cheaper with the same expansive reach, then you’ll want to consider the alternatives — like the Netgear Orbi that costs $200 for the same configuration. While Netgear’s mesh system offers more range, it doesn’t have the smart assistant feature you get with the Nest Wifi point.

Another option is Amazon’s Eero 6 router, which at $200 for a 2-pack system, is a bargain compared to Google’s offering. Similarly, it offers the same straightforward setup as Google’s Nest Wifi.

If you want more advanced setup options, consider the Linksys Velop MX5300 or Netgear XRM570 Nighthawk Pro Gaming WiFi Router. They’re substantially more expensive at $400 each for the routers themselves, but you get advanced networking controls and several Ethernet ports to hardwire devices.

Given that the router and Wi-Fi point are going to be stationary, it should last quite a while undisturbed — much like any networking gear.

Yes. Not only will you be able to expand your Wi-Fi’s coverage, but the Nest Wifi system can be used to control your home’s various connected devices.