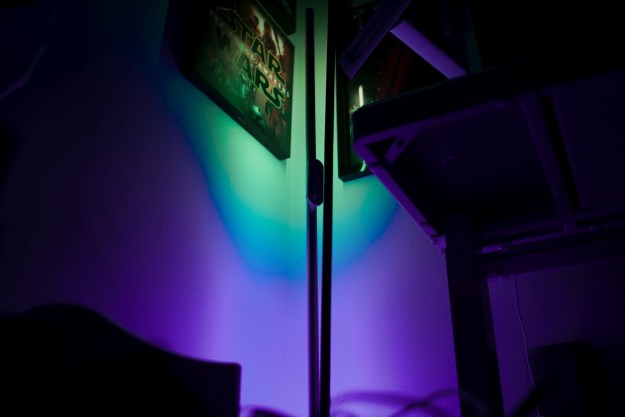 “If there's a bare corner in your home, the Govee Lyra Smart Floor Lamp will paint it with light.”

Govee is a brand that I’ve talked about many times in the last several months, partly because of how affordable its smart lights are compared to alternatives from established brands like Philips Hue and Lifx. Traditional light bulbs and light strips have become rampant in the smart lighting space, saturating the market with products that have very similar purposes and features — so Govee is choosing to expand its portfolio with its next device.

At first glance, the Govee Lyra Smart Floor Lamp looks like something from a futuristic sci-fi movie with its round base and skinny protruding column. But once it turns on, there’s something fascinating that happens to draw your attention. It’s certainly intriguing, but the $150 price tag makes it the priciest model in its ever-growing smart lighting lineup.

Putting together the Govee Lyra Smart Floor Lamp is a fairly straightforward process involving four components: A base, a narrow tube, a light strip, and a power connector. The narrow tube is fastened together and then connects to the base, which allows it to top a clearance of 57 inches when fully assembled.

Govee took the best qualities of a smart light strip and transplanted it into a potent floor lamp.

The toughest part of the entire setup is snaking the flexible light strip along the thin cutout along the tube. It reminds me of your ordinary light strip you may put up on a wall or around furniture, but it’s encased in a tough and flexible rubbery casing to fit inside of the narrow channel of the tubes. From start to finish, the whole process takes around 15 minutes at most.

Like I said, the Govee Lyra Smart Floor Lamp looks very different — so much so that it may not mesh well with traditional décor. If you’re after the minimalist look, then you can certainly appreciate what Govee has going on here. Compared to the Wyze Floor Lamp I reviewed, which looks very much what I expect a floor lamp to look like, Govee’s interpretation is undeniably as minimalist as it gets.

That’s not a terrible quality per se, especially when it doesn’t take up a huge footprint on the floor. I ended up placing it in one corner of my office, so that the light would be able to bounce off the wall more effectively. And sure, you can have it positioned so that the light strip faces away from the wall, but I ended up doing the opposite because the intensity of the light can be harsh to the eyes due to its potent brightness.

Light shows are sort of expected with these kinds of smart lights, but Govee goes the extra distance compared to some other table or floor lamps. While I really enjoy the ambiance that table lamps like the Philips Hue Iris offer, they can’t produce different colors simultaneously. That’s what makes the Govee Lyra special because since it’s a light strip, it can produce many different colors at the same time. This is achieved thanks to Govee’s RGBIC (red, green, blue independent control) technology.

Through the Govee Home app, available for Android and iOS, there’s an assortment of dazzling light patterns to choose from. What makes it better is that the light patterns are dynamic, instead of just emitting one color — which is fine if you prefer a more static ambiance, but I really enjoy the pattern changes offered by the Lyra. From breathing effects to mimicking the look of candlelight, it’s nice to know there’s a pattern to choose from for any mood.

Cementing its versatility is the Lyra’s ability to customize patterns. Through the app, there are options to select colors and what areas of the light strip to turn on so you can customize a light show. There’s a mode that allows the Lyra to light up whenever the microphone detects music or sound. If you intend on hosting a dance party, the Lyra nicely lights up to coincide to the beat of the music.

Finally, it’s compatible to work with Alexa and Google Assistant. I managed to get it set up with the latter, so I’m able to instantly turn it on/off through voice actions.

When it comes to being a main source of light, the Govee Lyra’s brightness easily makes it a perfect reading lamp. It also works well as an accent or ambient light with my particular setup because the light coming from the strip is harsh when looking at it directly.

Meanwhile, the colors it’s able to produce are saturated in tone — especially when different colors are emitted simultaneously. There’s something mesmerizing to say about the colors clashing with one another along the wall — it makes for an impressive light show. It’s one thing to see its color explosion through a picture, but it’s something else seeing it in action in person or on video.

The $150 cost of the Govee Lyra Smart Floor Lamp is without question the biggest hurdle to overcome for most people. It’s still on the pricey side, but it’s justified when you look at what the competition offers.

Yes and no. There aren’t that many smart floor lamps that offer this level of customization, especially for its price. The only other alternative worth looking at is the Philips Hue Signe, which is distinct for its ability to work as an ambient light with your home theater experience, but you’re looking at paying $250 for it.

If you wanta smart floor lamp with more emphasis on being a primary source of light, you can’t beat the Wyze Floor Lamp. Even though it only emits white light, you’re looking at paying under $50 for it.

Luckily, the base is weighted down enough to prevent the Lyra from tipping over, but the skinny metallic column could incur some damage in the event it’s tipped over by accident. Otherwise, you can expect to get long-term use out of this lamp since it relies on LED technology. Govee offers a one-year limited warranty that covers against defects.

Yes. It’s a floor lamp that emits potent lighting, making perfect as a primary source of light. And its color light show will dazzle the eyes.