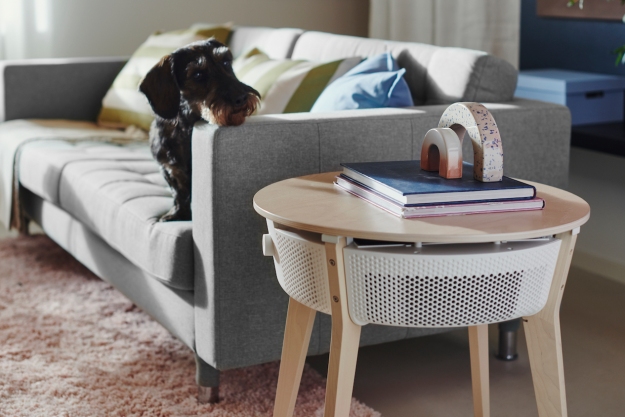 “The Ikea Starkvind combines a table with an air purifier, serving as smart furniture instead of just a smart appliance.”

It sometimes feels like air purifiers are a dime a dozen these days, but most have the same design: A tower-like body with numerous internal filters. The Starkvind sets itself apart by storing the air purifier inside a table. It doubles its utility by providing both a table and an air purifier.

But does it make a good smart home product? That’s debatable. Its overall functionality is somewhat limited, but so are the smart functions of every other air purifier I’ve ever tried out. With that comparison in mind, the Starkvind is a preferable option since it does more than just take up space on the floor.

The Ikea Starkvind has four table legs and a top. There’s a slight gap between the top of the table and the body to accommodate the airflow intake. It’s available in two colors: Stained oak veneer, or white (but more beige) veneer.

Once fully assembled, the table stands at 22 inches high, 21 inches in diameter, and has a cord length of 4 feet 11 inches. A button and dial on the front of the air purifier acts as a physical control point for the Starkvind.

The top of the table is locked in place but lifts up to allow access to the filter beneath. When you replace the filter, you’ll need to take the top off, but that’s as simple as snapping four pins out of position. There is also an optional extension for the power cord to give you slightly more length.

The Ikea Home smart app has the same basic, streamlined design as most of the company’s furniture. That’s not to say it’s bad by any means — it just doesn’t have a lot of bells and whistles.

You can also manually shift the speed from one to five, although I found it unpleasantly loud at both the fourth and fifth speed settings.

The Starkvind Air Purifier can be controlled entirely through the app and is actually incredibly responsive to it. A built-in air quality analyzer will tell you the condition of the air in your home, and if you set the controls to Auto, the Starkvind will automatically adjust its fan speed to compensate.

You can also manually shift the speed from one to five, although I found it unpleasantly loud at both the fourth and fifth speed settings. The Starkvind expels an impressive amount of air, and that’s nowhere more apparent than at its highest settings.

If you have small children around (or you just want your air purifier left alone), you can disable the on-device control knob from within the app. This locks the control panel, but don’t worry — an LED on the front of the Starkvind acts as a reminder so you don’t accidentally try to turn the knob.

The app also tells you how long until you need to check the filter, and will remind you when it’s time to replace it. If you tap the information icon — denoted by an I with a circle around it, it breaks down how to inspect and change the filter with step-by-step instructions and information graphics.

The app has other features, like the ability to create scenes. The features are par for the course; the app works well, even if it doesn’t have much to set it apart from the other apps on the market.

Outside of this, there isn’t much to say. The Starkvind does a good job of cleaning the air in your home, and the assembly process makes for an interesting conversation starter.

The Ikea Starkvind’s main selling point is its unique design, but its air purification qualities shouldn’t be underestimated. I kept an air quality monitor (separate from the built-in one) hooked up near the purifier, and I saw marked improvements while the Starkvind ran. It’s a great option for getting more functionality out of an appliance that would otherwise just take up space.

There are certainly air purifiers with more bells and whistles, but there aren’t really any options that combine a table with an air purifier in the way the Starkvind does. If you’re looking for two-in-one functionality, you might consider the LG PuriCare Aerotower — a purifier and fan in one.

The Starkvind has a filter life of around six months, after which it can easily be replaced. The design itself is sturdy, with intelligent design choices to protect potential ingress points. While I wouldn’t try standing on it, the Starkvind should last for years as a side table or end table.

Yes. If you don’t mind assembling it yourself, the Starkvind makes for an attractive piece of furniture and an effective air purifier. While I would like to see more functionality in the app — and to see the next iteration of the Starkvind introduce something new to the air purifier space — this one is a solid buy.