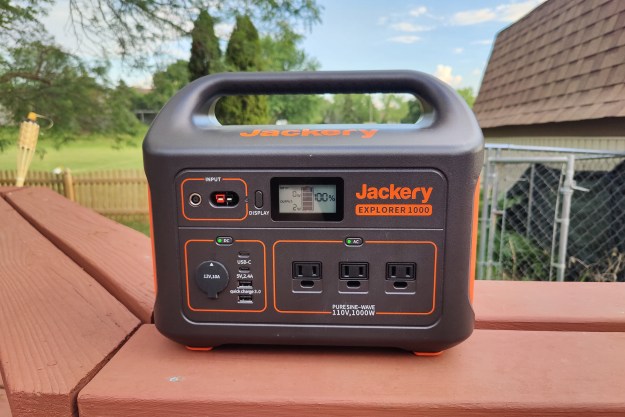 “The Jackery Explorer 1000 Portable Power Station is a solar-powered powerhouse that will keep you charged and ready for days.”

When I first sat down to review the Jackery Solar Generator 1000, I was initially — and wrongly — disappointed, and it was entirely my fault. When Jackery reached out to gauge interest in a review of the product, I leaped at the opportunity. I’d been thinking about picking up some kind of battery backup for my home for when the power goes out. More so, I’d been looking at a good way to generate power while I’m out camping, and again, this seemed like a good fit. So, before we get to my misplaced disappointment, let’s talk about what this device is.

The Jackery Solar generator is a 1000W portable power station with a 1002 Wh capacity. It has three pure sine wave AC outlets, 2 USB-C ports, 1 USB-A port that supports Quick Charge 3.0, and one DC power port. In short, you can plug basically anything into this bad boy, from a phone to a refrigerator, and it will run just fine. All the power ports are located on the front, along with an LCD display that shows you the current charge level, incoming power, and outgoing power. Both AC and DC sections have power buttons, so you can turn them off when not in use. Around the side is a single flashlight with its own power button, and on the left is a large vent that accommodates airflow for the fans inside.

Power from the sun

Along with the Explorer 1000, you can purchase two SolarSaga 100 solar panels that recharge the Explorer. The cells run at 23% efficiency, which is pretty decent in the field. They can generate up to 100W of peak power on a bright sunny day. Each of those panels weighs in at just over 10 pounds apiece. The Explorer 1000 battery weighs in at over 22 pounds. The panels fold up into 24 by 21 by 1.4 inches; put simply, none of this package is very portable nor small.

That, along with large and obvious warnings to keep all components out of the rain, I questioned the viability of this product as a “camping device.” Toting around 40 pounds of gear isn’t exactly my idea of portable. But we’ll discuss this more later on.

I used the Jackery to power a couple of different portable setups for work. In one instance, my son used it for his Windows laptop, school Chromebook, iPad, Android phone, and wireless headphones for two and a half days. I also set up a mobile workstation with a Windows laptop, iPad, portable monitor, and two wireless chargers that lasted me two days at a stretch. During that time I pulled around 40-60W of power. I admittedly forgot to turn off the outlets overnight, which probably could have kept me going another half day or so.

Using the battery is very straightforward. Just plug in what you need to power and turn on the outlets you need. You turn them on in groups — AC and DC. While you’re working, you will notice when the fan kicks on, because it’s fairly loud. It’s not jet-engine loud, but it can cover up a soft-spoken person for sure. Really, the fan is my only complaint about the device. It’s really noticeable.

When it came time to recharge, I tried two different methods. First, I plugged the Explorer 1000 into the wall. That took around eight hours to charge back to full. That’s not too bad. Next, I busted out the two solar panels, and that’s where the fun began.

Power from the sun

On the first day, I tried to keep the battery pack and solar panels in my sunroom because I was paranoid about rain. It was a cloudy day, but even so, the battery managed to take in a 41% charge. On day two, I was lucky enough to get a sunny day, so I put the panels out on the back deck facing the sun. I turned the panels twice throughout the day to keep maximum exposure, and I was able to easily top off the rest of the battery. But the most interesting part of the experience was the numbers.

In bright sunlight, both solar panels started pulling in over 100W of power. If you’ll recall, my portable productivity rig used between 40 to 60 Watts of power. Math is hard, but that suggests to me that I could theoretically work indefinitely off of this battery. If I set up my workstation near a window and put the panels outside, I’ll be charging more than I’m using. Of course, that’s under ideal circumstances. But the possibility is still intriguing.

But let’s get back to the “portable camping device” I talked about earlier. When I think “camping,” I think about a tent and being out in the elements. But camping can also include a trailer, and this is the use case I think this device is designed for. In a camper, you need power and the ability to generate more power. Plus, in a camper, you’re protected from the elements much more than in a tent, and you don’t have to carry the battery anywhere. You just keep it in the camper.

But also, a device like this makes sure you can still work or stay connected even when you lose power at home, even if you lose power for days. That’s a very important use case. Plus, being a solar generator, that power is cleaner and less noisy than a gas-powered generator. If you’re looking for a backup power supply for your home or a portable power generator for a trailer-assisted camping trip, this is a solid device. It even has a flashlight, if you’re jonesing for a 20-pound flashlight.

Overall, this is a great power generator/battery that does exactly what it promises. The combination of the battery pack and the solar panels adds up to a pricey $1,300 with the solar panels included (or $1,000 without them), but honestly, many backup generators are around the same price or even more. The variety of ports available, including USB-A, USB-C, AC, and DC, means you can power anything. The two solar panels are huge — laughably huge — but they can recharge the entire 1000 Wh battery in under two days. That’s impressive.

There certainly are other power packs and portable batteries of this size, but there aren’t many of this size, with this power-generation capability, and with this many outputs. It’s pretty hard to beat on all of those counts. If you want to save some money, you can go with a gas generator, but over time a gas generator needs gas, while the Jackery just needs the sun. Last I checked, the sun is still free.

If you’re looking for something that’s easier to lug around, the RAVPower Portable Power Station is an alternative that weighs 7.7 pounds and features  250W of power using one only outlet — or a grand total of 300W when using both outlets. It’s a lot more affordable too and perfect for those weekend camping trips. It’s enough to power a Peloton bike through your next workout too!

The Jackery Explorer is made of thick durable plastic. I don’t anticipate any problems on that front, but it is crazy heavy, so I could see an errant drop causing some damage. It would take an extraordinary set of circumstances to cause this thing to break. My only concern is a lack of water resistance on both the Explorer 1000 and the solar panels. There isn’t just a lack of water resistance; there are warnings on the packaging to keep these devices the heck away from water. The Jackery is backed by a two-year warranty as well.

Yes, if you fall into one of the two categories I laid out. If you want a reliable backup power pack that can run a couple of essential appliances in the event of a power loss, or if you’re a camper owner looking for power in the great outdoors, this is a great setup. It’s expensive for sure, but the value it offers is top-notch.

Topics
Anker finally admits to Eufy security camera issues
Samsung SmartThings gets Matter support on iOS
The best Google Assistant-compatible devices
The best video doorbells for 2023
Best Smart Plugs: What is a smart plug, and which do I need?
The best outdoor smart plugs for 2023
This Shark cordless vacuum is under $150 — who needs Dyson?
Apple HomePod vs. Apple HomePod 2023
Apple HomePod Mini vs. Apple HomePod
The best robotic lawn mowers for 2023
Blink Wired Floodlight Camera offers heaps of features and an affordable price tag
How to fix an orange flashing light on the HomePod mini
How to set a timer on Amazon Smart Plugs