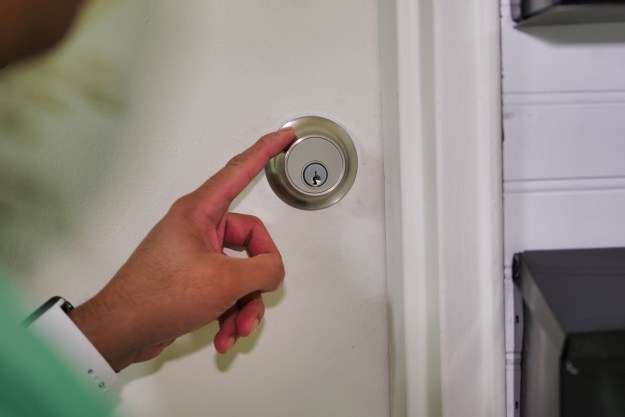 “The best looking smart lock gets improved with the addition of touch access and NFC keycards.”

Without a doubt, Level redefined our perception of what a smart lock should look like. Instead of a clunky keypad for all to see, Level sought out something far more graceful — and one that didn’t distract or take away from the existing look of a door. The Level Bolt Lock was an engineering marvel, but now the company intends on taking the next step.

The Level Touch is the continuation of the company’s approach to blend seamlessly into the smart home. Featuring the same discreet design as before, combined with the power of touch, it’s aiming to be a complete all-in-one system that makes it even more convenient to access your smart lock.

A contemporary design that blends in

Similar to its previous smart lock, the Level Touch doesn’t stray far with its ingenious design that tucks away all of the components — so the end result is a smart lock that looks awfully like an ordinary lock. It’s available in four finishes: Satin nickel, satin chrome, polished brass, and matte black, so it’ll match just about any door’s paint job.

Just as before, installation is a breeze taking no more than 10 minutes, but unlike the Bolt, the Touch requires you to swap out your original lock with a new one. This is important because the Bolt was pegged as a system that could turn any lock into a smart one. However, it’s not the same situation here with the Level Touch, so you’ll have a new set of physical keys to use after you’re done setting it up. I really prefer the other implementation, but I understand that this is meant to be an all-in-one solution out of the box.

Even more ways to unlock

As the name implies, the Level Touch can be operated with the power of touch — in addition to the usual method of using the Level app on a smartphone or through GPS proximity. Now, you can set it up so that a touch of the outside key housing allows you to lock and unlock it. Initially this was a finicky experience because it failed to initiate the unlocking mechanism. Luckily it was short-lived and after a few tweaks of the settings, it started to work like a charm. There’s peace of mind knowing that not anyone can just touch the lock and unlock it. That’s because you still need your on you in close proximity, in order for this to work.

In addition to touch, Level introduces these NFC keycards that function as another way of accessing the lock — a useful option if you want to give access to a caregiver, family member, or someone else. It comes with two keycards, which can be programmed through the app. It definitely reminds me of a hotel key, since it functions in the same way by placing it flush against the keyhole and slightly above it. My only minor complaint is that it requires upward of five seconds for it to recognize the card, rather than being instantaneous.

You can set it to auto-lock itself after a preset interval through the app, which is useful if you’re just rushing out the door to get somewhere. There’s also the option for auto-unlock, something that’s handy if you’re tied up carrying groceries. This feature, of course, is GPS based and it’s only enabled when you first cross and enter your home boundary. In my situation, the app displays the home boundary as covering nearly a block, so I’d say about a radius of 150 feet. That’s a bit alarming considering that’s still a sizable distance, which could give someone enough time to enter your home before you get there. In reality, though, the Level Touch begins to auto-unlock when I’m about 8 feet away from the lock — so there’s no cause for alarm.

While I enjoy the convenience of just tapping the lock to operate the mechanism, there’s one particular situation when it doesn’t work — and it’s a problem I hope gets addressed. Unfortunately, the touch to unlock function won’t initiate unless you step outside the home boundary and renter it. Therefore, if you forget something at home after locking it via touch, you won’t be able to use touch unlock right away.

A smart lock that looks awfully like an ordinary lock

This is due to the fact that it’ll all monitored by GPS coordinates. You’ll need to venture outside of the zone and re-enter the space before it recognizes you left home and re-enables touch unlock. I was outside of the door when I forgot something inside, so I’m not able to touch the lock to unlock it. Instead, I had to open the app and unlock it through there.

Thankfully, there are several other methods to unlock. As I mentioned already, you could always have an keycard on hand, but you can fall back on using the Level app, HomeKit control by asking Siri to unlock the door, or as a last resort, the physical keys. While there is an Android app to use the Level Touch, Apple users are given more controls thanks to HomeKit support — so it can be tied to other automations through the Home app for iOS. However, there’s still no support for Amazon Alexa or Google Assistant.

Battery power comes in the form of a single CR2 battery that fits snugly inside of the bolt. It’s rated to deliver over a year’s worth of battery on normal usage but obviously, that’ll vary.

The Level Touch commands a premium $329 cost, which is a $100 increase over the Level Bolt. It’s not cheap, but the high cost is the price to pay for all the engineering challenges of having such a minimalist-looking smart lock — as well as introducing a few new lock/unlock methods.

All the components are meticulously crafted from metal and exhibit a sturdy build quality, so I’m confident that it’ll hold up very well. In the event something malfunctions due to a defect, there’s a two-year limited warranty that covers defects in materials and workmanship.

Yes and no. There are few that can match its minimalist design, since many of them tend to be bulky and imposing figures on doors. SimpliSafe’s Smart Lock closely matches Level’s philosophy of not being a distracting element on a door.

As for features, the Lockly Vision continues to be the Swiss Army knife of smart locks with its keypad, fingerprint sensor, and built-in video camera that effectively turns it into a doorbell cam as well. If you’re looking for something that won’t cost a huge sum and are simple to install, consider the Wyze Lock and August Wi-Fi Smart Lock.

If you absolutely want to retain the look of your door so it remains as natural, then the Level Touch is the logical choice. Not only does it look like a traditional lock, but I really appreciate the added new ways of unlocking it.