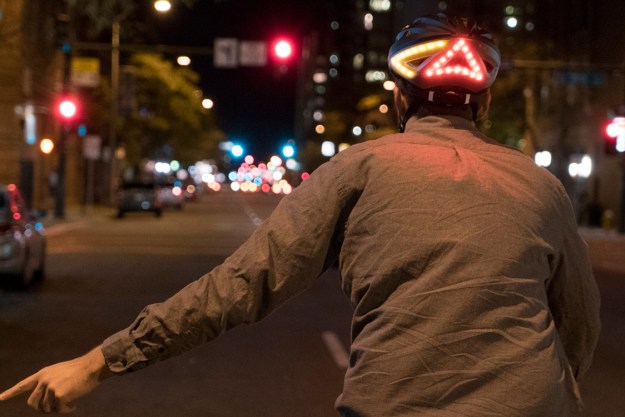 “The ultra-bright Lumos smart cycling helmet is a shrewd choice for cycling safety.”

The smartest thing anyone could do with a cycling helmet is to wear one while riding. The soft, squidgy thing inside our skull is fairly important, so it’s a good idea to protect it in the case of a spill. However, cycling helmets aren’t very smart — and we mean that in both ways. They’re rarely the most flattering of headgear, and they don’t usually offer much in the way of high-tech functionality either. After all, neither of those aspects are terribly important if protecting our noggin is its number one priority.

The Lumos cycling helmet is the exception to the rule. It’s properly smart, in that it boasts smart connected features, and it looks cool while wearing it, too. No, we wouldn’t wear it casually or on a date, but in the grand scheme of cycling helmets, it’s a winner. That’s partially due to its sci-fi looks, which come from a series of LED lights in the front and the rear of the helmet. It helps you see and be seen, and gives a lot of information on your movements to drivers around you, helping keep you safe.

We’ve been wearing it for a couple of weeks and are here to tell the tale, which goes some way to proving its effectiveness.

Like regular cycling helmets, Lumos constructed its cycling helmet from plastic with soft, foam inserts running around the inside for comfort, along with a pliable plastic skeleton which supports the chin strap, along with a size adjustment wheel at the back. Our model arrived in a rather flashy cobalt blue, though it also comes in white or black. It’s bulkier than some racing-style cycling helmets available — due to the lights and electronics housed inside, of course — ending up like a blend of racing and city style helmets.

Despite its bulkiness, the fit is excellent and incredibly comfortable. The straps tend to lose their position though, requiring constant adjustments to keep the helmet tight every time it’s worn. However, the wheel for tightening up the fit is accurate and simple to move while wearing. It’s impossible to say if the helmet fits everyone but Lumos has the measurements available on its website to check before buying. At 440 grams, it’s heavier than some of the more expensive cycling helmets, though it’s not entirely noticeable, and we never felt any fatigue from wearing it.

How does it look?

We like the sci-fi cool style a lot. With its lights glowing, a friend compared it to the helmets worn by Viper pilots in the original Battlestar Galactica sci-fi TV show, and we’re happy with that. There’s an array of LED lights along the front and three sets around the back, all performing different functions. The front lights glow white, while the central rear triangle glows bright red and is flanked by two other triangles which operate either as direction indicators or stop lights.

How does it look? We like the sci-fi cool style a lot.

That’s right, the Lumos has the same functionality as the rear of a car. It’s all cleverly operated by a small unit attached to the handlebars of your bike — which connects via Bluetooth — with left and right buttons to control the indicators and an accelerometer that activates the “brake” lights while slowing down.

All the electronics sit inside the helmet but don’t worry about any contributing to injuries in the event of a fall — they’re suitably soft where appropriate or specially encased to prevent such a problem. It’s also waterproof, so there’s no risk of brain-zapping electric shocks if you’re caught out in a shower. The helmet itself conforms to CPSC and EN1078 safety standards for the United States and Europe. The smooth, slippery outside surface enables the helmet to slide along the asphalt nicely, rather than your hair, skin, and pulpy flesh doing the same. Please note, we haven’t put this to the test.

While we may be facetious about not getting hit, it’s a very important point. Lights on our bikes keep us safe after dark, and the more lights the better. It’s also incredibly beneficial to give as much guidance as possible to fellow road users about our intentions. The helmet turns on with a button on the back which lights up the front and rear LEDs. Concerning the indicators, the control buttons strap to the handlebars of your bike and require a single press to start the lights flashing in your intended direction.

A steady audible beep in the helmet lets you know the indicator is on, a feature added after beta-testers said they sometimes forgot to turn them off — which requires a second push of the button. The indicators are glaringly obvious to anyone behind you, adequately boosting visibility, but there are psychological benefits, as well. You don’t have to wave your arm around in midair to show which way you’re turning, meaning both hands remain on the handlebars. Plus, it’s comforting knowing there’s a very clear sign of what you’re up to at all times. Since it’s located up high, cars have the ability to see it even if they’re not directly behind you.

The benefits of the brake lights are harder to quantify. You can’t personally see them but they do give off a very bright light, and the way they quickly activate will definitely make a driver look in your direction. Testing out the accelerometer shows how well it worked, and the sensitivity can be adjusted in the Lumos app, so it’s not activated too often. It’s located inside the handlebar-mounted controller, so it’s not affected by head or body movements, either.

The light at the front stays on all the time and glows white rather than red. It’s not powerful enough to replace the main light on your bike, however, we probably wouldn’t want it to, as our head isn’t always looking directly in front of us. It is especially helpful if you store your bike somewhere dark, though. Ours goes in an outbuilding, and the helmet lit the area up really well after the bike lights went out.

The Lumos app is relatively simple. It shows the battery level for the helmet and the handlebar control and features several settings to adjust accelerometer sensitivity, warning beep duration, and the option to update the helmet’s firmware. It’s clear and easy to use, and it ran without fault. We also never experienced pairing or connectivity issues.

There is a battery in both units, each of which charges via a supplied, proprietary USB charging cable which connects magnetically to both units. We’ve tested the helmet for a little over four weeks and have charged it twice, based on an average of a ride every other day. If you use it to commute to and from work for a length of time, you’ll likely visit the charger a lot more. The control unit hasn’t needed charging once and still sits at 80 percent capacity, so we’re not expected to do so for a while.

The Lumos began as a Kickstarter product and after successfully raising its required funding, is now available for order through the company’s website. It’s priced at $170 which puts it in the higher range for a cycling helmet — cheaper versions run roughly a tenth of the cost — and only a few of the best-known brands charge more than this for their high-end models. However, they’re all just helmets void of the technology Lumos squeezed inside its offering, making it a good value in comparison. We also can’t think why anyone wouldn’t want to spend a little more on a device which protects and increases the likelihood of not being hit in the first place.

Lumos has a one-year warranty on its helmet, which doesn’t cover wear and tear, or the battery. The company also offers a 30-day money back guarantee, so if you’re not happy with it after purchase, you can return it for a refund.

The Lumos cycling helmet puts safety and usability first, ignoring overly complicated features that diminish its lasting appeal. It’s comfortable to wear and the sci-fi look appeals to our inner geek, but you’ll have to be prepared to spend more than usual on a cycling helmet to get one.

The Lumos isn’t the only smart cycling helmet on the market. The Livall Bling incorporates lights and indicators and costs a little less at about $100 on its own, but it’s considerably less attractive and comes with a whole host of features — from speakers to fitness tracking — many won’t want. Plus they require the purchase of additional sensors and extras. It’s the same story with the $200 Coros, which has a high level of functionality, but no lights.

We like the look and the functionality of the Brooklyness Classon helmet, which also has lights and indicators, plus a blind spot sensor and gesture tracking. However, it’s still not available for sale, despite being advertised through Indiegogo since July 2016.

The Lumos is simple to use, clear in its benefits, and available for purchase today. Outside of buying a helmet without any technology at all, it’s the best option for riders wanting to improve safety.

It’s waterproof and made from plastic, so to destroy it, it’ll probably take you to fall off your bike. The build quality is great but there are some creaks and groans from the plastic shell and some areas where parts don’t fit together precisely. It feels like a first-generation product, which it is. Additionally, even after only a few weeks, the foam liner is coming apart slightly. It’s not even close to being unwearable, and Lumos does sell replacements for this essentially consumable part, but it’s something to keep in mind if you wear it every day.

Yes. It’s comfortable, cool-looking, and features practical benefits every cyclist wants. The fact it makes us feel safer when riding and boosts confidence is also a considerable benefit. How can we not recommend a product that may help avoid an unfortunate accident? And how could you not want to invest in a product serving, and essentially fulfilling, exactly that purpose?

How to convert your window blinds into smart blinds

All the new tech that blew our reviewers away this month

Nanoleaf and Secretlab team on a new smart light strip