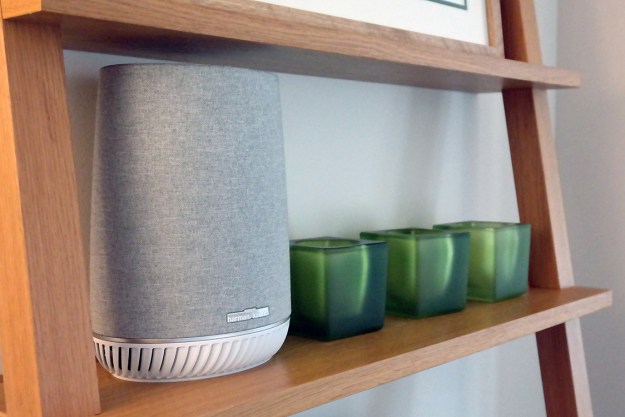 “With solid audio and blistering long-range Wi-Fi performance, the Orbi Voice could be the future of smart home everything.”

Over the last two years, Netgear has consolidated its position as a leader in whole-home Wi-Fi systems by building out a comprehensive selection of Orbi devices and supporting accessories. Following the launch of the original Orbi and Orbi Pro system for small business, the networking specialist has added a range of indoor satellites to suit homes of various sizes and outdoor access points for the yard.

The bundle we’re reviewing, comprising both router and smart speaker, hits stores this month priced at $430. It’s a significant outlay for any whole-home Wi-Fi system, but pricey for a two-hub solution. The smart speaker/satellite combo comprises much of that cost. It’s available on its own for $300 later in the fall, allowing existing Orbi owners to easily slot one into their home networks.

Alongside partnerships with Harmon Kardon and Alexa, since we last looked at Netgear Orbi, the company has also integrated Circle with Disney parental controls as a pre-installed option on Orbi hardware. As we’ve covered many of Orbi’s core features in previous reviews, we’ll take the opportunity in this review to focus on the new additions and update performance comparisons with competing systems.

The compact Orbi package retains the vase-inspired design of previous Orbi systems (indeed, the router is the same RBR50 model that debuted in 2016). While it’s certainly larger than many competing systems, it boasts better specs than most. This model is powered by a nippy 710 MHz Qualcomm IPQ4019 processor, backed by a generous 512 MB RAM. When connected to the new satellite, the router supports tri-band AC2200 Wi-Fi, three Gigabit Ethernet LAN ports, and a USB 2.0 for printer sharing. That makes it much more powerful and versatile than mesh Wi-Fi competitors, and looks good doing it, too. It’s no surprise that Netgear isn’t yet feeling the need to update the router.

The collaboration with Samsung’s Harmon Kardon line has resulted in a similar-looking smart speaker, although its gray cloth wrap brings Google Home to mind. Rounder and chunkier than the Orbi router, the speaker is smartly finished with a metallic silver stripe atop a sculpted base, designed to maximize low-end audio. It’s nice-looking enough to grace any shelf or desktop.

While it’s larger than many competing systems, Orbi boasts better specs than most.

Two rear Ethernet ports are standard, while under the hood, audio internals comprise a single, 1” tweeter and beefy 3.5” woofer, delivering 35W power and 63-230 KHz response. A bass reflex port wraps over both drivers to optimize low-end output. Above, Alexa voice control is delivered via a 4-microphone, far-field array. While it’s true that, on paper, those audio specs are behind the likes of Apple HomePod or Google Home Max and closer to Sonos One, the addition of Wi-Fi access makes this smart speaker highly versatile.

One major advantage of modern “whole-home” Wi-Fi routers over traditional devices is simple setup.  Download a mobile app, walk through a few easy configuration steps, and you’re done. Orbi Voice? Not so much. It’s a story we’ve told many times. Converged devices that bring together features from disparate partners must tread a fine line between convenience and complexity. Designing and delivering a multi-faceted setup experience that’s both slick and simple is a tough gig — one that Netgear, like others, doesn’t quite get right.

When setting our Wi-Fi network preferences, we found the Orbi app did a poor job of finding our new network name and completing configuration — exactly the kind of frustrating router configuration issue these modern systems were designed to resolve.

A few app resets later, we were able to continue, but we never had full confidence in the Orbi setup. Repeated attempts to locate the speaker satellite failed only for it to magically pop up as a connected device later. Attempting to connect our Alexa account was also greeted with errors, yet the satellite still responded to voice commands. Overall, setup was fragmented, frustrating, and a backwards step compared to our previous experiences with Orbi.

Once you are up and running, you can take advantage of an enviable array of network controls. But what we love about Orbi is that those who wish to set up their router and forget it ever existed can do just that. Netgear’s mobile app offers a simplified selection of mainstream options, like guest networking, parental controls, and speed tests.

But unlike most competitors in this class, Netgear also opens up full administration control in the web browser. If you’re an advanced tweaker, you’ll love Orbi’s full range of features, like VLAN configuration, integrated VPN, Dynamic DNS services and much more. With this device, “simple” does not mean “limited.”

The addition of Circle with Disney adds friendly and powerful parental controls to the Orbi range. Once enabled, you do need to manage settings with a standalone app, but setup is quick and painless. A basic, no-cost plan provides age and content/service category filtering, easy Internet service pause, and site reporting history. It’s a stronger selection of filters than you’ll find on most routers, and busy parents will love how simple Circle is to setup.

A premium ($5/month) plan boosts features with time limits, nightly curfews, “no Internet” blackout periods, screen time rewards, support for Alexa, IFTT, and more. Considering the standalone service usually requires a $99 hardware purchase, no-cost integration with Netgear devices is a differentiating feature for families, albeit one that others may ignore.

Alexa-powered smart speaker is a cut above basic models

When you consider the Orbi Voice satellite packs high-speed Wi-Fi access as well a “premium” smart speaker, its audio performance is remarkable. You certainly won’t hear the clarity and refinement of smart speakers like Apple HomePod or benefit from the sheer power of Google Home Max, but Orbi Voice certainly beats basic models like the Echo. Output from the speaker easily fills a large room, with surprisingly deep lows and a reasonable, if a little muddy, mid/high range.

Given the Harmon Kardon certification, we were expecting more detail and separation of instruments from the speaker, however. With a single, front-facing woofer and tweeter, there’s no attempt at 360-degree sound, so audio quality is quite directional. You’ll want to sit in front of the speaker for the best experience.

Meanwhile, Orbi Voice’s touch-sensitive manual controls were highly responsive throughout our tests. A tap illuminates top-mounted volume controls, which can be adjusted with a sliding finger. You’ll also find buttons to mute the speaker, disable the microphones, and activate Alexa.

You won’t hear the clarity of the best smart speakers, but Orbi Voice beats basic models.

Additional controls are available in the Orbi app, including four EQ presets and custom (basic) sliders for bass and treble. Whatever your preference, though, you shouldn’t push the speaker to extreme volumes (nor do you need to) where vibration gets unruly and quality diminishes.

We found Alexa responded quickly to commands, and the four-mic array did a great job of hearing us at normal speaking volume both at distance and when music was playing at loud volume. The Orbi app had consistent issues reporting the connection status of our Alexa account, but it had little effect on operation either way.

On balance, there are certainly better audio performers available than Orbi Voice, but as speakers go, few are as smart or as versatile.

Having tested most whole-home Wi-Fi systems on the market today, we know that Netgear Orbi is up there with the best. Thanks to its dedicated wireless and wired backhaul, Orbi Voice delivered strong Wi-Fi performance in tests throughout the home, although we found Ethernet performance to be slower than anticipated.

We tested wired and wireless connection speeds between the router and satellite in a four-story, 2,500 square-foot home. The router was positioned next to the cable modem in a second-floor bedroom. We then placed the satellite speaker in typical locations around the home hub — a floor above in the attic office, and then two floors below, in a basement where Wi-Fi coverage is patchy.

We’d previously seen great results with the original Netgear Orbi’s Gigabit Ethernet performance, but this time, Orbi Voice failed to compete. An average speed of just 729 Mbps is well behind the pack and was cause for concern.

At 302 Mbps, short-range Wi-Fi speeds were similar to the debut Orbi system – perfectly respectable, but, again, behind class-leaders. But it’s the long-range performance in which Orbi Voice truly shines.

Orbi Voice does a fantastic job of sustaining speeds.

We typically see the performance of cheaper mesh Wi-Fi competitors drop-off severely at long range, but Orbi Voice does a fantastic job of sustaining speeds. An average speed of 296 in our spottiest test location is the fastest we’ve encountered to date, and we were able to boost that slightly to 307 Mbps using Orbi’s wired connection.

If you need to blast strong and speedy Wi-Fi to the farthest reaches of your home, there’s no finer choice in today’s whole home Wi-Fi market than Orbi Voice.

While its audio fails to hit the highs delivered by the most expensive smart speakers, Netgear Orbi Voice is the most versatile whole-home Wi-Fi system on the market today. Solid audio performance combines with smart and responsive Alexa assistance to create real utility for Orbi owners new and old, while enhanced parental controls by Circle with Disney offers valuable protection for the kids.

Add lightning-quick, long-range Wi-Fi, and you have one heck of a package. Fingers crossed that Netgear’s Orbi app developers can zap the errors in setup and Alexa connectivity, which are the only dark spots in this effort at convergence.

Orbi Voice stands alone in this level of convergence, but if you’re looking for the best smart speaker around, be sure to check out Apple HomePod, Google Home Max and Sonos One. If you’re only interested in a router, take a look at Netgear Orbi.

With a growing range of routers and satellites for use both indoors and outdoors, Orbi has been a big hit, and the range will be around for some time to come. We’d anticipate competitors jumping in with similarly converged devices next year (look out for this trend at CES 2019), and the whole-home Wi-Fi category is due for chipset upgrades in due course. But for now, Orbi Voice is a great pick.

Yes. Netgear Orbi remains a leading choice in whole-home Wi-Fi, and the introduction of Orbi Voice adds differentiating features while maintaining performance. There are better-sounding speakers around, but few are this smart.