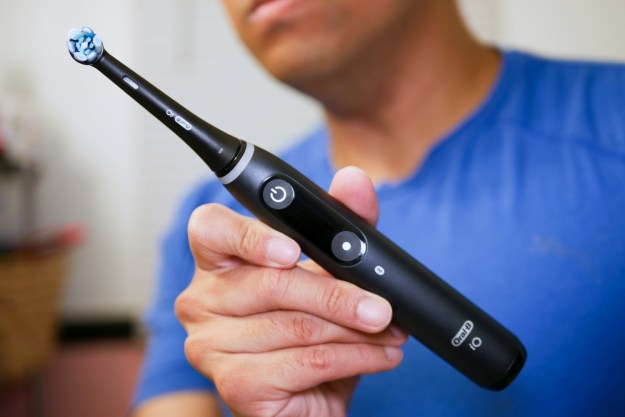 “With so much time spent on its development, it lives up to delivering the best brushing performance around.”

Earlier this year during CES 2020, I got a sneak peek at Oral-B’s new smart toothbrush: The iO Series 9. I only had the chance to get in a single brushing session, but I came away from the experience intrigued. When a company spends six years developing a smart toothbrush, expectations are surely going to be high. Months after that brief encounter, I’m more informed to tell you if it’s worth the wait. Check out other Oral-B models in our best electric toothbrush deals going on right now on Amazon Prime Day.

High-tech in every way

I’ve owned several manual and electric toothbrushes, but the iO Series 9 is the first I would call downright imposing. While it may look like just another electric toothbrush from a cursory inspection, it’s undeniably fancier looking up close, and equipped with tech that makes it a step above the rest. It’s plastic, but significantly beefier in size than other brushes, with the weight and solid feel to match. A tiny screen showcases battery life, brushing modes, and even an emoji face after each brush to grade my performance. Oral-B has put in a lot of work behind the brushing mechanism, which consists of a frictionless, smooth magnetic drive system to produce powerful micro-vibrations as you brush (more on that later).

To be blunt, I’m enamored with how well this toothbrush cleans my teeth. In using one of Oral-B’s entry-level electric toothbrushes in the past, I was never convinced that it was any better at cleaning than Philips’ Sonicare line. The iO Series 9 is a totally different beast altogether. In fact, it’s the best toothbrush I’ve ever used, including the Hum by Colgate that I checked out right before this one.

Part of its top-notch performance is due to its ability to detect how much pressure I’m applying while brushing my teeth. An LED ring around the toothbrush lights up in red, blue, or green, to indicate if it’s too much, too little, or just right. The Oral-B app will do the same thing, but I prefer the visual of the light, even if I’m brushing with my smartphone in hand. Additionally, a distinctive vibration tells you when it’s time to move onto another quadrant.

Thanks to its intense micro-vibrations, the Oral-B iO Series 9 delivers the best brushing performance I’ve experienced. I feel like my teeth receive a buffing job, in addition to a power wash — so it leaves my teeth with a squeaky feel every time. It doesn’t entirely get rid of hard-to-remove plaque buildup in between teeth, but to be frank, I haven’t come across a toothbrush that can do this well. Sorry, you still need to floss.

After each brush, it’ll display how much battery is left. Not surprisingly, it’s a battery hog, eating away about 10% of its battery after each use. So yeah, it’s going to require frequent charges.

More of the same smart functions

So far, the majority of smart toothbrushes I’ve encountered don’t differ too much with their smart functions. The Oral-B iO 9 tracks a total of six zones when being guided using the app, so I can see exactly how well I’m brushing each area. However, the tracking feature isn’t available with unguided brushes, which is rather puzzling for something “smart.” At the end of each brush, I’m given a score from zero to 100 to indicate my brushing performance.

Even though it’s able to tell me how well I’m brushing each quadrant, a part of me craves for more precise brushing data. For example, I can spend a lot of time brushing the front side of my teeth, while neglecting the back, but it treats the two sides as one. It doesn’t paint a true picture of my brushing and habits. This isn’t an isolated problem, but rather, a common one shared by most products in this category. I want a smart toothbrush that can learn my precise brushing habits and guide me toward practical improvements, I don’t want to brush to chase after a score.

Impressive cleaning comes at a price, which for the Oral-B iO Series 9 means having to fork over $300. It’s ridiculously expensive, but it’s also one of the most advanced toothbrushes on the market and delivers a satisfying clean each and every time. Fortunately, the purchase comes with a travel case and four brush heads, which saves the aggravation of buying replacements soon after. Still, it costs $30 for a two-pack replacement.

With its substantial build quality, I’m confident it’ll hold up for a good while. Oral-B offers a 2-year warranty that covers defects, but not normal wear and tear.

If you’re looking for an exceptional clean with connectivity functions, it’s hard to find anything else that comes close. You may be able to get a similar performance with Oral-B’s other models, perhaps with the $200 priced iO Series 7 smart toothbrush.

Yes, mainly for the fact that cleaning takes priority above anything else. All of its smart functions and tracking are extra. If it can’t succeed at cleaning, then it’s a failure.