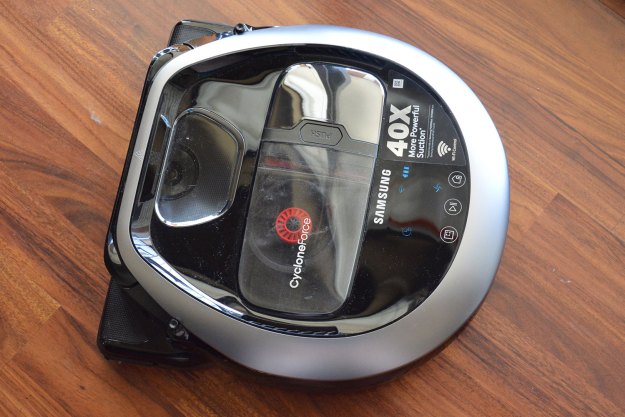 “The Samsung Powerbot R7070 costs hundreds less than the competition, and you get what you pay for.”

At CES 2017, Samsung announced its Powerbot Turbo, a robot vacuum so expensive ($1,200), even Dyson was probably surprised. But it’s not the only Wi-Fi-enabled robot vacuum Samsung has to offer. Meet the Powerbot R7070, a vacuum that costs half as much. But is it missing a big chunk of the Turbo’s functionality? Read our Samsung Powerbot R7070 review to find out.

The last time we tested a Samsung Powerbot, the VR9000, its 5-inch height meant it couldn’t make it under some pretty standard items of furniture. This time around, Samsung lopped off some of the protruding plastic to get it to 3.8 inches tall. That’s only a smidge taller (0.2 inches) than many Roomba models. Despite its redesign, the Powerbot has quite a few things in common with the VR9000, including a ceiling-facing camera, a rectangular front for getting in corners, and a LED screen that flashes error messages when the bot gets in trouble. Its 11.4-inch cleaning brush is smaller than the VR9000’s 12.2-inch one. Underneath are two rugged wheels and two smaller ones to help it turn.

The 0.3-liter dust bin nestles into a cavity on top and pops up when you press down on it. You press on it again to snap it back into place. There are just three buttons on the robot itself: recharge, start/stop, and spot clean.

The bulk of the cleaning functionality is actually found on the vacuum’s remote. It has all the buttons you’ll find on the Powerbot, plus several more. You can change the suction level, turn off the annoying “I’m stuck” chimes, set a schedule, and actually control it like remote-control car that also happens to be sucking the dirt off the floor. There are only three directional buttons, though, so you’ll have to swivel it 180 degrees to get it going in the opposite direction. It’s not quite clear why there’s no backwards button, but it does make driving the vacuum a little less fun than it ought to be.

There’s no back-up button on the remote so you need to turn it around with the right and left ones.

Whereas earlier models of the Powerbot meant you were out of luck if you lost your remote, the R7070 can also be controlled via app. The Samsung Smart Home app lets you set suction power, schedule your cleaning, send it home to charge, and drive it like the remote control. Unlike the LG Hom-Bot Turbo+, you don’t get a camera view of where the vac is headed, so you have to be in the same room as the Powerbot in order to see where it’s going.

We found the app to be a bit buggy. Sometimes it would say it wasn’t connected after we had it open for awhile, so we’d have to close out. It also signed us out somewhat frequently, meaning we had to memorize the password and re-input it. That made the Alexa integration handy, as we could just ask her to start the vacuum for us instead of searching for the remote or hoping the app would work. As with some Alexa commands, you’ll need to get the hang of the specific wording. To return it to the charging station, for example, you need to say, “Alexa, tell Samsung to return vacuum home.”

Plight of the navigator

We’ve said it before, but robot vacuums just can’t replace manually operated ones. Many do a fine job of picking up everyday dust and pet hair (which is possibly why the only scheduling option for the Powerbot is daily), but they all tend to leave some debris behind and miss entire sections of a room. This Samsung is no exception. It’s meticulous in its movements, so it gets pretty good coverage, but there are some things it just can’t do. We had it run around our living room, and it left a trail of crumbs where the rug meets the floor because it just couldn’t pick them up. The only way to block off areas — like if you don’t want the Powerbot to run into pets’ food bowls, for example — is using the provided magnetic strip. It works, but it’s fairly short. If you’re not home to close doors to off-limit areas, you might come home to find it stuck where it tried to suck up the bathroom rug, as we did. However, thanks to an app alert, we knew the little guy was having issues.

In the app, your history shows you a map of exactly where your bot roamed during its cleaning cycle. We really wish we could mark off areas on the map where we didn’t want the robot to go. Ideally, we’d have it run daily but do the living room on Mondays and Wednesdays, the bedroom on Tuesdays and Thursdays, and so on. That’s a feature said to be coming to the Powerbot Turbo, and while it may not be worth the extra $600, it’s a functionality we’d definitely like to see on the R7070.

We found the app to be a bit buggy.

If you don’t turn off the vacuum’s alerts, they seem to sound incessantly. What’s wrong?, you might wonder as it pings and flashes C05 on its screen. You need to have the manual handy or do a Google search to find out there’s something wrong with the bumper sensor. This happened to our Powerbot a few times. While it lightly nudges against some objects, as though delicately challenging it to a fight (it was no match for a bag of recycling and let it be), it does ram into others. It constantly clipped or pushed around our bar stools, for example. Often that’s when we’d get the bumper error and have to manually push it back in, all while the alert sounded. The beeps added unnecessary stress, like we were trying to defuse one of those glitter bombs.

In normal mode, we found the vacuum would head back to charge in just under an hour, and in Turbo mode, it would last half the time. To reach full charge took just over 2.5 hours. In terms of cleaning, we found the Turbo mode to be about 30 percent better than the normal mode, picking up 77 percent of the debris we sprinkled on our carpets. On hardwood, it tended to scatter far more of the rice than it picked up, though. It did pick up a lot of pet hair, but when we ran a competing robot vacuum after its sweep of a furry-floored bedroom, we found it had left a bit behind.

Speaking of pet hair, the Powerbot’s “brush” is more like rubber flaps and is meant to be self-cleaning. Whereas bristled brushes tend to hang on to the hair, the Powerbot is supposed to detangle and send it to the bin. We found this to be mostly true, but hair did get wrapped tightly around the areas of the brush without the flaps, so we still had to bust out some scissors to de-fur from time to time.

The Samsung Powerbot R7070 comes with a one-year warranty.

The Samsung Powerbot R7070 doesn’t have the largest bin, longest runtime, or most advanced app controls, but it at $600, it is one of the more affordable Wi-Fi-enabled robot vacuums.

It’s less expensive than the $1,000 Dyson 360 robot vacuum or the $999 LG Hom-Bot Turbo+. However, the Turbo+ lets you see exactly where the vacuum is headed via a camera, so you don’t need to be in the same room to get a look at your pup or clean up a mess. You can also control the $900 Roomba 980 via Alexa, though it too is pricier. The similarly-priced Neato Botvac Connected ($699) offers great cleaning power and navigation skills.

The way the Powerbot bashes into chair legs makes us worried about our furniture’s durability, but we also wonder whether we’ll find it sans sensor bumper one day. We’d like to see the app get more stable and add a few features, like scheduling flexibility, but those can be delivered via an update. Considering how vastly different the Powerbot looks from the old version, we wonder if next iteration might bring an even sleeker, more powerful profile.

While it’s one of the least expensive app-controlled robot vacuums, the Powerbot R7070 lacks some of the features of its pricier competitors. It does a pretty good cleaning, but you probably won’t want to take advantage of its app-control capabilities if you’re afraid of it wandering someplace it shouldn’t be. We’d wait until the app gets more robust and less buggy unless you’re planning on mostly using Alexa or the remote to control it.